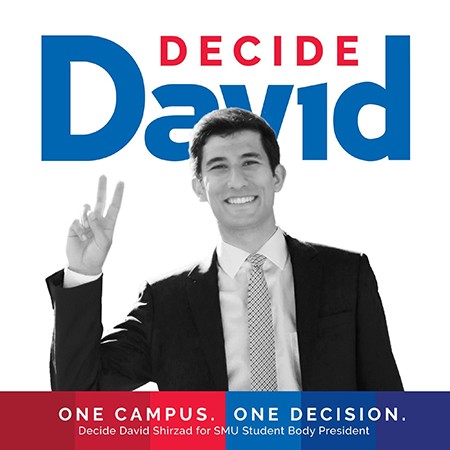 I first met David Shirzad when the 2015 Orientation Team was officially announced in the middle of my sophomore year. I’ve spent a fair amount of my time on the Hilltop meeting various student leaders, but have never encountered anyone like David. Over the course of the summer, I noticed several traits that make David stand out from the crowd of impressive individuals at SMU.

First, David is hands down the most thoughtful person I have ever met. And not just buy his girlfriend cute gifts thoughtful, but really inquiring about and trying to fully understand what he’s facing thoughtful. In the world of alternative facts and fake news, it’s refreshing to find someone who will not stop until he understands every facet about a particular situation. I’ve witnessed this deep understanding lead to effective problem-solving time and again, hoping to decode the secrets behind it.

Second, David cares about understanding the stories of people he meets and moves past the questions of hometown, major and classification. His remarkable ability to piece people’s stories together and subsequently understand the world they come from makes him uniquely qualified to lead.

Third (and most important to me) is David’s fierce commitment to inclusivity. From his dedicated volunteering with Best Buddies to stirring up spirit in Loyd Commons, he’s always seeking to create spaces for fellow Mustangs to come together. As our campus rapidly changes both physically and demographically, it’s important we look to candidates who appreciate the wealth of diversity at SMU and actively encourage it.

Over the past three years, David Shirzad has moved from co-worker to close friend and grown exponentially in his capacity for leadership during his time here on campus. His experience ranges from Admission to Senate to Orientation to the Board of Trustees to the gates of Peruna’s own pen and he shows no signs of slowing down in his commitment to improving this campus. It’s so rare to find a leader who’s able to gain insight on so many crucial areas of the university and use it to protect the interests of students and have our voices heard at the highest levels of the administration. Don’t pass up on your opportunity to vote for the candidate who’s able to best serve our student body. Decide David at the polls on April 5 and 6.

Jessica Mitchell is majoring in Markets and Culture at SMU, is an Orientation Leader, student assistant at the Women and LGBT Center and SMU Admissions Office Ambassador.