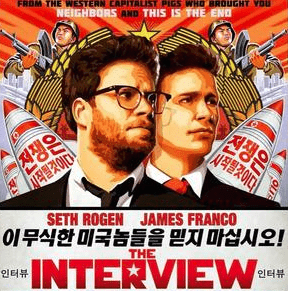 In Hollywood, there’s a saying: “All press is good press,” but Sony’s “The Interview” sets a different tone.

If you haven’t heard about the Sony hack, don’t freak out. You might live in North Korea.

But here’s a brief overview: Sony was hacked. The presumably North Korean hackers continue to deny any involvement and threatened retaliation for the premiere of “The Interview.” In a safe but unpatriotic move, Sony cancelled the release of the film. In response, the nation erupted over the studio’s decision to give into the terrorist’s demand, thus igniting a nationwide controversy and debate. Arguments swung from extremes to extremes. Some argued that safety takes priority; other contended that the hackers should be taken out.

Readers, if you’re worried about a nuclear strike on the United States, stay clear of the middle of the Pacific Ocean.

Amid the scandal that surrounded the comedy, studio executives decided to showcase the film and deftly implemented an unconventional release of the movie. A release that may mark a paradigm shift towards video-on-demand and day-and-date releases, in which studios simultaneously release films in theaters and digital rentals.

This seemingly unorthodox practice has been used before, but on smaller and more independent movies. Movies that embrace this method are usually unable to finance a national release.

To buffer their potential losses, Sony pursued digital options only after major theaters Cinemark and AMC abandoned the film following the threats of blowing up theaters that showcased the movie.

Despite the hackers’ threats, it appears that Sony came out on top. In the first four days of the release, the studio made at least $15 million from digital releases plus nearly $3 million from theatrical releases.

Brian Balke, SMU student and roommate, responded to the mind-boggling VOD figures: “Well, I’m not surprised if you give people the option to stay home and sit on their ***.”

The release of this movie and the circumstances surrounding it represent a unique situation.

In addition, many variables played into the opening weekend of “The Interview.” Many saw the act of viewing the movie as a slap in the face to the hackers and an exercise of the first amendment. This type of patriotism and hype that studios can’t buy, sell, or market helped the movie earn a laudable revenue.

However, analysts estimate that if Sony avoided the hack and the movie wasn’t forced to the forefront of a national debate, it would’ve easily earned $25 million on opening weekend. A figure closer to covering the costs of production and marketing and likely rake in profits.

While VOD profits for “The Interview” overwhelmed those of the theatrical release, marketers are expected to rely on the old model. Studios and theaters built such a close-knit relationship that a single movie is unlikely to drastically change the current system.

For now, the model of distributing major films in 3,000 theaters nationwide will continue to dominate as VOD profits grow alongside those of the current model.

Also consider that the numbers from “The Interview” are superficial. Many factors – patriotism, curiosity, and expression of free speech – played into buzz that pushed viewers to watch the movie.

Understand that drastic changes in major releases are as likely as North Korea acquiring nuclear bombs that reach the United States.