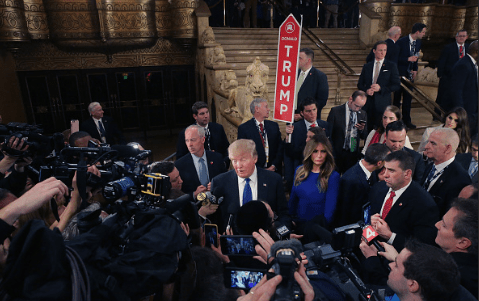 With Donald Trump’s statement that he might not accept the election’s results at the past debate, there has been some discussion about whether this election could be “rigged,” either by swaying public opinion or through other means. How much validity is there to this claim and where do the sources of bias come from in America’s election and election coverage?

For one, there are the biases that the news media displays, both in print and on television. At one point or another both sides have complained about the news media being biased against them, from Trump with Saturday Night Live to Clinton supporters claiming that her scandals are a over-covered right-wing conspiracy. And while the biases may not go as far as hardline supporters on either side claims, it seems as if in today’s age the news media is fairly blatantly biased.

Some sources are certainly more biased than others. For example, in television everyone knows which way Fox News leans and other networks like CNN have their own biases – albeit often more veiled than Fox News, at least on the surface. And certain online news outlets are fairly blatantly biased, although they are being taken more and more seriously as places of news in today’s internet age.

While some bias is blatant, most of the bias present in news media is somewhat inherent; there are real people who must make the decisions on what these news networks cover and what they pay attention to. However, sometimes it seems as if good judgement is thrown out the window when choosing what to cover. In addition to biased coverage distribution, often the wording displays the bias of the writer or publication – using overly positive words to spin coverage of one person while doing the opposite for the other.

While some biases are unavoidable, they may be exacerbated as product of the new media market. Both television and print newspapers must compete hard for attention and to get and keep their viewers – leading for the need to entertain customers and pushing ever more radical and biased coverage.

Of all of the above, the charge of collaboration between news outlets and political parties is the one that is the most suspicious when considering whether the election has been “rigged.” People traditionally have taken the news sources to feature unbiased facts, which is not true at all if they are collaborating with one of the major parties to coordinate coverage.

However, I still do not think that this totally constitutes election “rigging” by biasing people one way or the other. People are starting to realize in this modern age that the news is no longer unbiased. Even though the coverage this election cycle has been particularly crazy considering the circumstances, journalists and their respective biases have always been there – they did not just now decide to fix this election. So I do not think the news outlets are the place to look if one is trying to find a “rigged” election.

Another potential means of biasing the populace, which is not often properly addressed, is in polling results and their coverage. There are numerous ways that biases can be introduced into a poll. From a statistical standpoint, polls attempt to determine how an entire population feels or thinks about something by taking a sampling of them and averaging the numbers. Biases can occur in selecting these people, depending on whether the method to select those questions truly is random and reflective of the entire population.

There are other biases in the execution of the polls, from those who do not respond to the questioning (called non-response bias if one group doesn’t respond in disproportionate numbers) or from slight biases in the way that the questions are asked or posed to respondents.

However, in most major polls, these biases are accounted for and reported as a margin of error. While this uncertainty is published, often when the news media covers these polls they do not fully account for the biases or explain to people what the polls might mean.

Headlines like “new poll proves” some given point or others of the like use something that people perceive to be scientific and factual to advance a particular agenda, even when the polls have a huge margin of accuracy and one can seemingly find a poll to prove whatever statistic you want.

This form of bias in coverage of the elections might be slightly more dangerous than the typical news story, as it utilizes something that most people would regard as factual to advance a lopsided agenda with something that might not actually be facts.

While there has certainly been bias in the coverage of this election, I would not consider it to be to the point where the election is “fixed” or rigged in some way. While the coverage may not be fair, people’s own biases likely outweigh any bias of the news – people will typically find whatever coverage fits their bias, eliminating the issues above in most cases. And claiming that there has been election tampering is somewhat of a far-fetched idea, and most certainly is not prevalent in any widespread manner.