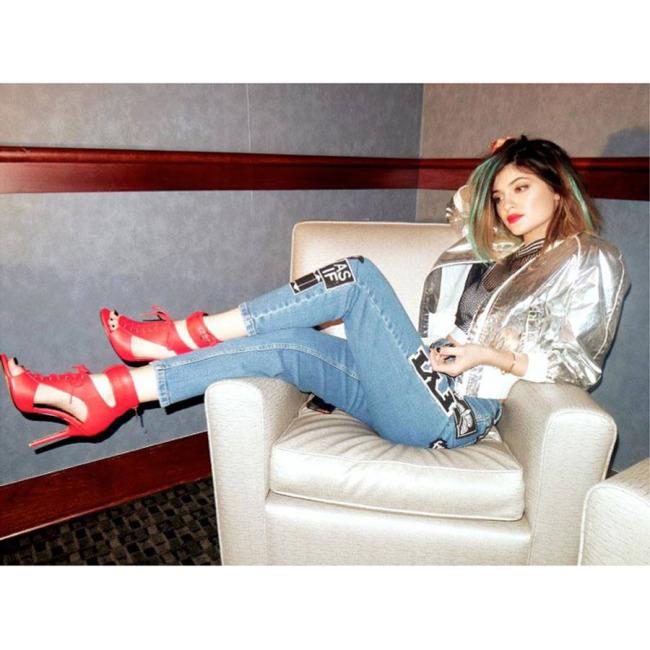 I can’t seem to escape from seeing Kylie Jenner anywhere on social media for the past few weeks.

The youngest Kardashian has been a trending topic recently for her superlatives in magazines.

I don’t have that much of a problem with her being the most influential member of her family.

Based off her social media accounts, I could see this coming.

Polyvore published a graph showing all internet searches of each member of the Kardashian family. Uber popular sisters Kim Kardashian and Kendall Jenner had their share of fame (Kim’s search peak was during her wedding, Kendall’s was during New York Fashion Week), but Kylie has been a strong rising trend search that is now at its pinnacle.

With the Kardashians holding a strong young adult fan base, Kylie Jenner has seemed to capture their interest through her edgy and rebellious style. Her Instagram is flooded with photos of her black and leather clothing, crazy hair and nails and signature raised-eyebrow-and-pouty-lip selfies.

Her fashion style is very different from the rest of her sisters, which has also attracted teens to follow her. She has capitalized this by creating a hair line and shoe line with Steve Madden.

Her success as a teenage reality star and famous sister of Kim Kardashian is somewhat commendable. If I were a 17 year-old that wasn’t in high school, I would love to live a life of buying whatever high-end urban clothing I wanted while jet setting around the world.

However, the issue that I have with Jenner being named one of the “25 Most Influential Teens of 2014” is that her accomplishments in fashion and social media do not equate to the accomplishments of other teens on that list.

Take Malala Yousafzai. She is a Nobel Peace Prize recipient. She has written a biography of her life living in Pakistan and being shot in the head by the Taliban. She is a Pakistani activist who has started her own nonprofit, the Malala Fund, to promote and fund education for young women. I think it’s safe to say she has Jenner beat by a smidge.

Another is Joshua Wong. According to Time Magazine, this young man has become the face of the Hong Kong protests. He’s a symbol of hope, finding peers and other supporters to fight for this cause in hopes to fight for Hong Kong’s democracy. He has been called an extremist in mainland China and has been faced with adversity, yet he still fights.

I know these young adults I exemplified are exceptions. They are people who have experience unfathomable things in their countries and have used this to fuel their passion for change and their dreams. Jenner cannot help that she lived in a fortunate country with an even more fortunate family and upbringing.

But what I am saying is that although Jenner is a significant influence amongst teenagers, I do not believe that she and her sister should be listed with other individuals like Yousafzai and Wong.

It’s somewhat disrespectful. Here, a Nobel Prize Winner and a young activist that has been called a pariah in mainland China is on the same level of influence as a pretty, fashionable celebrity.

I think her title of being the “Most Influential Kardashian” is true. I also do believe she is influential to teens on social media like Instagram.

But to be considered one of the “25 Most Influential Teens of 2014?” Especially when there are other teenagers facilitating cancer research, expediting technological advances and advocating and fundraising for their own nonprofits? I don’t think it’s right at all.