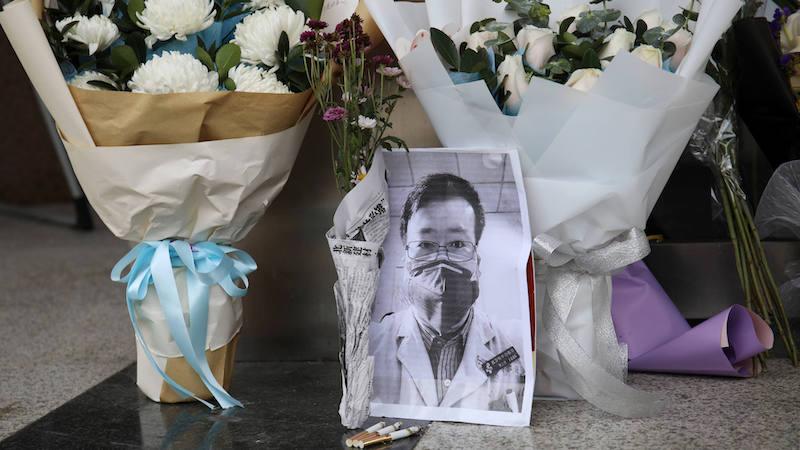 Li was the whistleblower who first tried to warn China about coronavirus in late December when no one outside of his native city of Wuhan had the slightest clue what coronavirus was. But instead of rewarding him, the government apprehended Li and forced him to sign a document promising to “calm down and reflect” on his statement. It promised him “sanctions by law” should he “stick to stubborn opinions and show no remorse.”

It wasn’t until nearly a month later, on Jan. 20, that the Chinese government started to acknowledge the outbreak. By Feb. 1, the day when Dr. Li announced that he himself had been infected with the virus, the number of confirmed cases had risen to 14,380.

Dr. Li’s death has sparked national outrage in China. Millions of angry netizens realize that Dr. Li would very possibly still be alive had the officials heeded his warnings. Hashtags such as “I demand freedom of speech” or “Justice for Dr. Li” are trending. Artists draw images of Dr. Li as a lone angel stepping into heaven. Poets write eulogies vowing “his death will not be in vain” while bloggers write essays mourning Dr. Li and expressing their disillusionment with the system.

Touching. But don’t think for a second this will change anything.

Dr. Li’s misfortunes expose a tale of failure in China’s system of governance. Contrary to popular belief, China has a fairly decentralized system where local governments strive to meet economic goals set by the central government. Failure is punished. As a result, it is standard practice for local officials to quietly and swiftly disappear anything that might derail the pursuance of these goals.

In the case of the coronavirus outbreak, the officials of Wuhan may have underestimated how infectious the virus is and overestimated how effective their response could be. If the local officials can solve the problem by themselves, why risk the possibility of wrath and fury from the top?

Once these judgements were made, Wuhan officials performed “kongping” within the social platforms where Dr. Li shared information. Kongping – a term used by Chinese officials to describe the process of finding, deleting and overpowering undesirable information with favorable information – is happening once again to Dr. Li.

A few hours after the news of Dr. Li’s death broke, the same state-controlled national media who once praised the Wuhan officials for “apprehending the rumor-mongers” have joined netizens in their demands for justice and condemnation of Wuhan officials. Interviews with the deceased’s family are scheduled, important officials have expressed their condolences, and surely, the officials of Wuhan will be publicly punished.

Netizens will start praising the swift actions taken by the national government and those who continue to criticize the government will be labeled “trolls funded by foreign powers”.

Poets will go back to writing about how much effort was put into fighting the epidemic.

Bloggers will return to their essays of why Chinese authoritarianism is more efficient than American diplomacy.

Kevin Yuanhao Dou is a free-press activist and writer for the Daily Campus. He is a first-year at SMU studying journalism and political science.