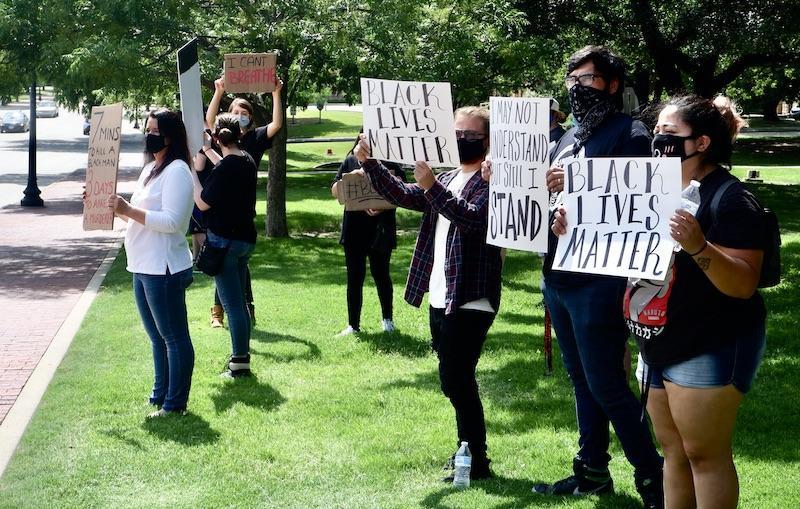 Black Lives Matter is not a political movement — it is a human rights movement. Black Lives Matter (BLM) is a global organization whose mission is to eradicate white supremacy and build black communities by combating and countering acts of violence. BLM combats every inequality African Americans face: from police brutality, to medical racism, to unethical treatment within the justice system.

For many African Americans, advocating for equal rights and treatment is a mission they take personally. This is apparent within black organizations on SMU’s campus, such as The Association of Black Students (ABS), who have worked to ensure that black students are equipped with the necessary skills and resources to be successful during their collegiate career. However, there are individuals within SMU’s community that make these resources more difficult to obtain and create a hostile and negative experience for black students on campus.

Racism on campus is no secret, and racism towards black students is both covert and overt. Some professors use the n-word in a classroom setting, but it is deemed acceptable because it is for “educational purposes”. Within Student Senate, ABS and their umbrella organizations have been asked racist questions about their events, and they are often denied funding without legitimate reasons. The SMU Police Department has racially profiled students on numerous occasions and pulled them over simply because they looked “suspicious”. To many black students, it feels like the university as a whole does not care about its African American community.

This feeling was amplified with President Turner’s initial May 30 statement on racial and social injustice. Some students felt encouraged, but many perceived his words as no more than empty platitudes lacking sincerity and genuine concern. Considering the history of racism on SMU’s campus and beyond, the statement minimized the gravity of the black experience and their concerns.

The number of innocent black lives lost at the hands of racists oppressors and systemic injustice has grown exponentially over the years. Black men, women, boys and girls are disproportionately killed every year with no regard. Since 2015, 5,399 people have been shot and killed by the police. Many of these lives were wrongfully taken by police officers, who are rarely convicted of their heinous crimes — 99% of police killings from 2013-2019 did not result in criminal charges. Though police officers are killing innocent black American citizens, they are not the only ones.

George Zimmerman was a regular civilian who shot Trayvon Martin on his way home because Trayvon was wearing a hoodie and looked like he was “up to no good.” More recently, Ahmaud Arbery was murdered on his daily jog by Gregory and Travis McMichael. Civilians, like police officers, are rarely convicted for killing black people.

The centuries-old injustices that plague the black community extend far beyond murder– racial inequalities exist in almost every aspect of life. In the medical field, black women are two to six times more likely to die during childbirth than white women in the U.S. This statistic cannot be attributed to underlying health conditions or a lack of resources, but perhaps that black women are not regarded or cared for as equally as white women.

However, it is the inequalities of the legal system which weighs heaviest on the black community. Most notable: the disparity in the rates of incarceration. One in every sixteen white males will go to prison in their lifetime. In contrast, one in every three black males will go to prison in their lifetime. There are systems that have been built on the oppression of African Americans in this country, which is why it is imperative to understand why Black Lives Matter is so important to the advancement of racial unity.

Turner’s initial statement failed to acknowledge the perpetual racism black students experience on campus nor did he reassure our value within the SMU community. President Turner did make mention of the Cultural Intelligence Initiative, whose original goal to increase black representation and ensure equity for black students was diluted and generalized to serve all minority students on campus. These changes muted the individualized needs and priorities specific to the black SMU community’s experience, and missed an important opportunity to address the outstanding grievances of black students on campus. This, along with other missed opportunities, left black students restless and discontent.

However, President Turner’s second statement “To our Black Students, faculty, staff, and alumni” was a pleasant surprise and much needed. Not only did he express outrage in the senseless killings of George Floyd, Ahmaud Arbery and Breonna Taylor, he made a point to say “Black Lives Matter.”

The statement “Black Lives Matter” in no way means that other lives do not matter. It is simply stating that, by definition, all lives cannot matter until black lives matter. To the black student, those three words from President Turner meant everything. Those three words meant that you see us, you value us, you stand with us, and our contributions to the SMU campus are important. I was even more encouraged to see the president acknowledge that “we have more work to do” and we cannot stop at simply issuing written formalities and sending out mass emails.

As a university dedicated to shaping world changers, it is imperative that we are at the helm of the fight against racism. To truly embrace the worth and dignity of each mustang on SMU’s campus as outlined in our core values, there must be an active commitment to protecting black students from experiencing racism and prejudices on campus. I look forward to seeing the university administration take the necessary steps toward making every mustang truly be valued.

Kennedy Coleman is a rising junior majoring in political science with a minor in public policy and international affairs and English. She is a part of Student Senate, the Association of Black Students, and many other organizations on campus. She is dedicated to making SMU an inclusive campus where everyone feels like they belong.