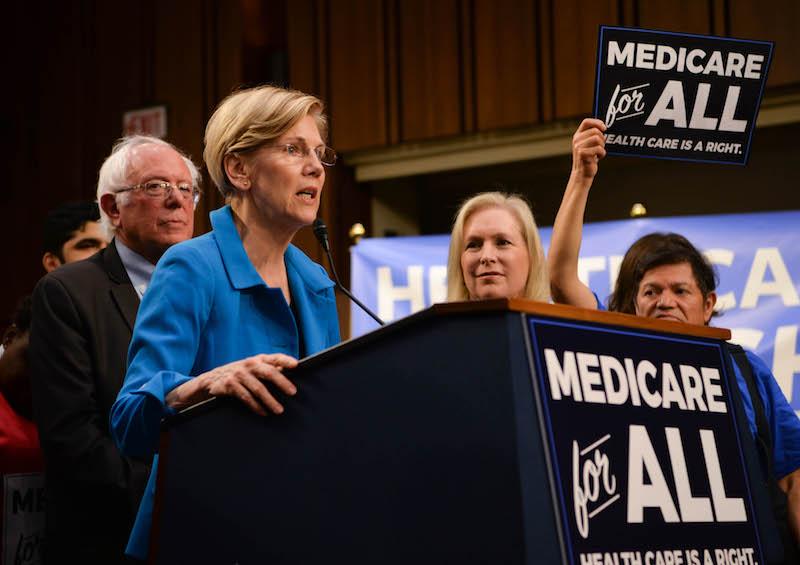 If you are looking to support a progressive candidate with a backbone in the upcoming presidential election, healthcare is one of the biggest issues to follow. Many democratic hopefuls claim to be running in support of Medicare for All, a term that ordinarily meant federal single-payer, but is now being thrown around as a synonym for universal coverage. Other candidates outright reject the practicality of such a system, choosing instead to stick to the broken for-profit model we know today. But the only kind of presidential candidate that is worth rallying behind in the 2020 election is one that stands firm in their belief that people should always come before profit, and that means supporting Medicare for All as a universal federal single-payer system.

First and foremost: Healthcare is not a privilege, it’s a right.

In the richest country in the world, there should be no reason people are suffering, and even dying, because they can’t afford basic care. Our current multi-payer system has caused incredibly high costs and high uninsured rates, leaving millions of Americans either struggling to pay off their medical debt or without access to healthcare at all. A universal federal system with comprehensive coverage is the only acceptable way forward, and we need to make sure our future president believes that as well.

.@AOC says Medicare For All means single payer. No excuses.pic.twitter.com/CvebhPwpk2

When candidates like Sen. Kamala Harris, Sen. Elizabeth Warren, and Sen. Cory Booker have been pushed on their stated support for Medicare for All, they talk of the “multiple paths” to universal coverage, taking the single payer model away from the forefront of the discussion. They use empty wording like “affordable” and “accessible,” or talk about a public option so they sound agreeable to both the 70 percent of Americans who support Medicare for All, and those who are attached to the idea of private coverage.

It seems like Booker hasn’t gotten his briefing yet on whether his big donors want him to support single payer Medicare for All, Medicare Extra, or Medicare for people over 50. pic.twitter.com/Ivd9NggYs6

The private healthcare industry views people and their care as merely a means to make a profit, despite what’s in their best interests. Employer sponsored health insurance means an individual’s body is essentially owned by the businesses that employ them. Take coverage birth-control for example, which can be denied because of an employer’s religious beliefs. This extremely complicated system views people as either commodities or consumers, but never as just human beings that need care.

Last year, private health interests formed “Partnership for America’s Health Care Future,” a group that hopes to remove single-payer from the national conversation by influencing the Democratic Party’s messaging about healthcare. This kind of intentional re-framing is used to manipulate people into thinking they are making the best choices for themselves and their communities, when in reality they are just keeping pharmaceutical and insurance companies in power.

Currently, many Americans struggle with loads of medical debt, blowing through savings and some even filing for bankruptcy. A study published just last week found that the Affordable Care Act did little to change the number of medical bankruptcies in America, proving that these weak attempts to plug the holes in our broken healthcare system can do little to solve its deep rooted problems.

The system in which pharmaceutical corporations, private insurance companies, and hospitals have a financial incentive in the sickness of our family and friends should be replaced with one in which our government has the financial incentive to keep us healthy. This isn’t just limited to conventional healthcare, it also means taking preventative measures by finally addressing issues like food deserts, environmental issues, and housing problems that make us sick in the first place.

We have a moral obligation to prioritize health justice, and that means understanding universal accessibility is vital. Our medical quality and innovation can not be championed if it is reserved for the very few who can afford it, and too many have been essentially left for dead for this to continue. With Medicare for All, we now have the opportunity to fight for something that could transform the lives of millions of Americans. Our candidates should know that if they want our vote, they have to fight corporate special interests for a universal single-payer healthcare system.