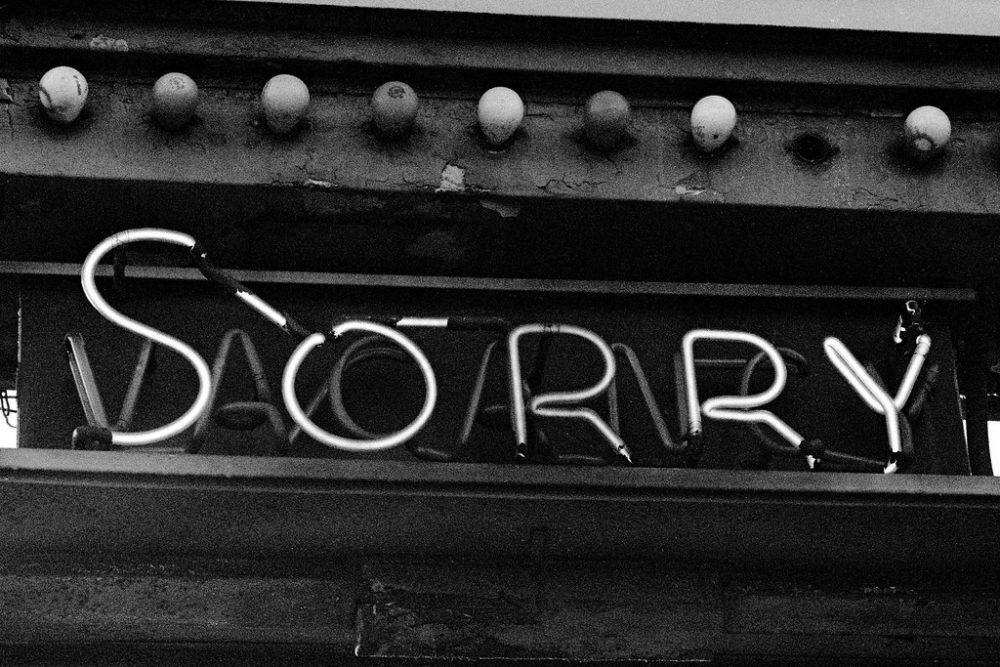 Um, what are you apologizing for?

The amount of times I have made an apology so casually, so effortlessly – incomprehensible. As in the number of times I have used the phrase “I’m sorry. . .” I can’t even count because I’ve lost track.

For me, this habit of over-apologizing began at a really early age. I can remember tripping over the stairs and muttering an “I’m sorry” to the stair I tripped over, or even an “Oops my bad” to the wall I crashed into. Of course these events seem comical now, but as I reflect back on them – I realize there was a great deal of regret that I held for the supposed harm I had caused to things that didn’t even have “true feelings.”

Overtime, my growing use of apologies intertwined itself within my daily routines. It was as common, and easy as waking up in the morning, or drinking a glass of water – I did it effortlessly, and without a thought. At the time though, I couldn’t comprehend that this habit, was routed to something much deeper within myself, but as I grew older, I observed many people, countlessly, making the same mistakes that I did.

Conversation starters like the common “Hi,” or “Hey, how are you?” we overuse them out of necessity. But, how is it that something as intricate as an apology, could be classified as a common phrase? I did a search, and you wouldn’t believe where I found the phrase “I’m sorry.” Number four on the list.

Want to fact check me? Check out this website: https://www.fluentu.com/blog/english/basic-english-phrases/

We are taught to use apologies to make amends with those we have hurt, and I have absolutely no problem with that at all. But, what I do have a problem with is overusing a phrase that, really, just gives away a part of ourselves every time we use it. Think about it, there is a great deal of thought that comes to garnering the courage to apologize for something you have done wrong, and when it is done it is incredibly meaningful. But, overusing it? Well, if I am going to apologize for everything in my life then won’t that take away from the point of me apologizing in the first place?

Pain is irreplaceable, so I can understand using an apology in this scenario. But more often than not, I, even you, will casually mutter the phrase “I’m sorry,” without thinking twice about it. Why is it though, that we always feel the need to take the first step and apologize?

I can tell you the reason I apologize. To start: I’ve am someone who is adamant to owning up the things they have done wrong. I am unafraid of the consequences associated with the actions I have done in the past, and I will certainly admit when I am in the wrong. But, I’m also someone, and I’m sure you can relate to this, that sometimes feels like it is their job to apologize for everything in hopes of redemption – not even from just the person I’ve hurt – but redeeming myself as a do-gooder.

But here we face a dilemma: Apologizing to people that don’t understand why we are apologizing. The ten dollars I put into a machine, overtime, loses value. The dollar still has meaning, but it’s essentially worthless when it’s gone from my using it. Thats how the apology is in todays context: We overuse it to the point that it loses its meaning. So the more I apologize to one person, the more confused they become as to 1) Why I am even apologizing and 2) What does my hundredth apology even mean to them by that point?

I wanted to gain a little more context as to why people overuse apologize, so I consulted in my friend Mary Grace Mewett, a therapist for adolescence in the Dallas area.

The umbrella term she used to describe situations where we tend to over-use apologies is called ” Owning up. ” Owning up means taking it upon ourselves to accept that we did something wrong, but she also told me that it comes from a place of feeling as though we are burdens, enough to warrant an apology.

“It causes us to own things that really aren’t ours to own in the first place, and it really just opens the doors to foster unhealthier relationships not just within ourselves, but with the people around us.”

One of my favorite things that she said was, “Owning everything in life is not appropriate. We have to own what we can own.”

An apology is noble, and yes, I absolutely get it. I know that there are times when you just have to be noble and accept that you really did something wrong, that needs to be owned up to. But being honest with both myself, and you, we need to come to the realization that we are not the burdens that we so often see ourselves as.

Most importantly, you have nothing to apologize for.

Annabella Chamoun-Ko is a contributing writer for the Daily Campus. She is a freshman majoring in Communications and Marketing.

The Daily Campus welcomes opinion contributions from students, faculty, and community members. Submissions should be no more than 1000 words and are subject to editing. Please email submissions to smudailycampus@gmail.com, and include an SMU ID, a cell phone number, and a short biography.