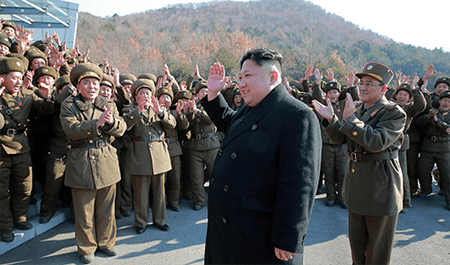 It looks as if Kim Jong-un has reached the end of his rope, or at least has come incredibly close to it. While the North Korean regime has been allowed to become more aggressive in the past decades while using China as a shield, recent events have increased the regime’s risk of toppling.

North Korea has continued to develop nuclear weapons and chemical weapons despite UN sanctions. Additionally, North Korean missile testing and boasts about Intercontinental Ballistic Missiles – ones that are able to strike the American mainland – have drawn increasing criticism from the U.S.

China has long been a key reason why North Korea has been able to persist in their actions, but China’s patience seems to be wearing thin. Reuters reports that China “has called for talks leading to the denuclearization of the Korean peninsula.”

With support from China waning, Trump seems to be considering strikes on North Korea. An American military carrier group has steamed into the area, military drills are being taken out between the U.S. and Japan, and rumors speculate that special force teams are training to strike at North Korea.

All of this causes the Daily Mail to speculate that if “the US and China act in tandem – one wielding the big military stick, the other threatening to cut fuel and food supplies – surely North Korea would have to give ground and denuclearise?”

However, Kim Jong-un does not necessarily seem like one to negotiate, and backing down from his rhetoric may lead to a collapse of his regime at home. Therefore, it is seen as likely that an armed conflict might brek out.

This conflict would likely be one with a high toll: North Korea has chemical weapons and enough firepower to strike at South Korea and possibly even China. Additionally, any collapse of the regime would lead to an influx of refugees from North Korea and spark another huge, humanitarian crisis.

Despite these risks, it seems as if Trump is more than willing to use force, with the Daily Mail criticizing that “His furious rants on the election trail against sending American troops to solve foreign problems are forgotten.”

While a strike on North Korea may be incredibly costly for both the U.S. and the region, something needs to be done about the North Korean problem and now would be the opportune time to do it – that is, if China and the major world powers align.

An armed conflict would almost surely result in the first nuclear weapons being deployed in combat if North Korea has any capability to do so as is expected. If that happens, the chemical weapons and the impact on South Korea would be great.

As such, any kind of diplomatic or unarmed de-escalation of the conflict is preferable, but those strategies have not worked in the past.

The longer Kim Jong-un and the Korean dictatorship are allowed to last, the larger the problem becomes. If Trump can negotiate a solution to this issue via sanctions or “armed negotiations” in conflict, it could be a huge victory for him. It also could be a huge misstep if it engulfs the United States in another costly conflict and causes more damage than expected.

Hopefully the world leaders, namely China and the U.S., find a way to put a stop to the North Korean regime without Kim Jong-un engaging in a suicidal conflict that will destroy his nation and countless lives in the process. However, if by peaceful means or by conflict, at least for the moment it seems as if tensions in North Korea are quickly approaching a flash point for conflict.