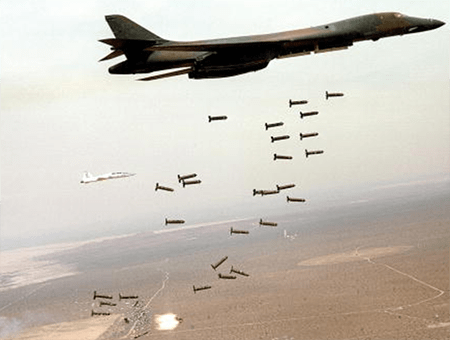 On Thursday, April 6, 2017, two U.S. missile cruisers fired 59 Tomahawk Cruise missiles at a Syrian air base, retaliating against chemical strikes which were reportedly carried out from the base. This was a swift and overwhelming response from the U.S. at the discretion of President Donald Trump, but the speed and force of this response has caused tensions to rise worldwide.

In addition to being a Syrian air base, the air field also had numerous Russian soldiers stationed there, and the U.S. had to take extra care in order not to strike any Russian installments. Firing missiles anywhere near Russian troops seems risky, and Trump would have a much bigger mess on his hands right now had any Russian lives been lost.

In the aftermath of these attacks, officials from Russia commented that “from now on we will respond with force to any aggressor” conducting airstrikes in the manner that the U.S. did against Syria.

If this is true, then Trump and U.S. National Security advisors must be incredibly careful if they choose to conduct any more airstrikes against Russian allies in the future, as the possibility of engaging in an armed conflict with Russia would skyrocket if they back up their claim.

Somewhat unrelated to this issue – but relevant to the global climate – is the movement of Chinese and American troops in the North Korean vicinity. China has deployed 150,000 troops to locations near North Korea, and the U.S. has recently moved a nuclear-powered carrier into the region.

These movements are likely due to North Korea’s claims of increased nuclear power and mobility. But this also seems to increase the chance of armed conflict and rising tensions in another area.

Trump’s forceful response to the Syrian chemical strikes was a power move – as stopping the proliferation of chemical warfare is most certainly in the interest of all nations. However, the strike and Syria’s ties to Russia have heightened global tensions and have made any future strikes or offensive actions much more risky.

While I do not think Trump is sending us toward World War III, it seems as if the world took one step closer over the past week. Hopefully all parties can come to some agreement and the chances of conflict do not escalate any further in the coming weeks and months. Concerned citizens should keep an extra close eye on events overseas for the next few weeks.