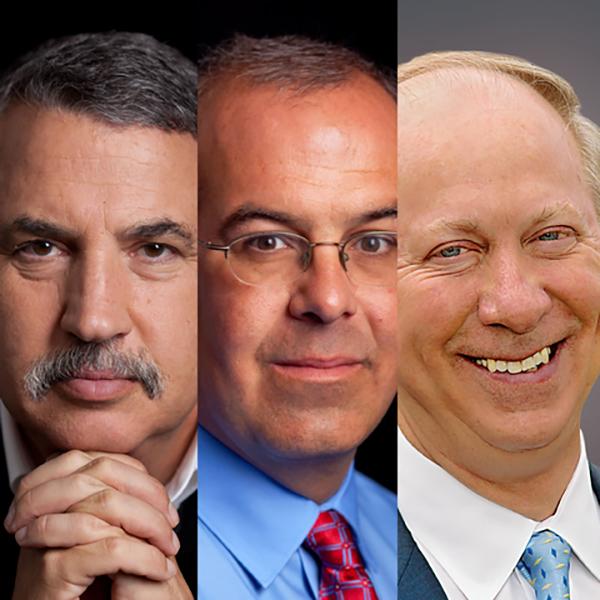 DALLAS – Three political commentators came together on SMU’s campus on September 20 to discuss how waning levels of trust in America are having both domestic and international consequences in front of an audience of 1,400.

CNN senior political analyst David Gergen led a discussion between two bestselling authors and New York Times columnists Tom Friedman and David Brooks in SMU’s McFarlin auditorium as part of the University’s Tate Lecture Series. The speakers talked extensively about the changing shift in America, namely, how Americans are having less and less trust for their peers and administrations. Although this phenomenon has developed over multiple generations, this general distrust surged during and after the Trump Administration.

On September 29, Texas voters will get to see how candidates for governor attempt to win their trust during November’s midterm elections. This is the first gubernatorial debate between Greg Abbott and Beto O’Rourke. The SMU debate team will host a watch party the night of the debate at 7 p.m. in the McCord Auditorium. Follow the debate live with Daily Campus reporter Kirk Ogunrinde (@ogunrindekirk) on twitter.

“This trust is reciprocal, once you get in this trust-free loop, it’s very hard to turn that around, and if you have a society without trust, you can’t get really [anything] to work, nothing works,” Brooks said.

The remark followed a flurry of statistics on the changing levels of Americans’ happiness and levels of trust.

The panelists broaden the scope of American’s diminishing trust. They said that it is not just a national issue.

The discussion struck a chord with attendees who realized they had noticed the same thing.

Brooks told the audience that this lack of trust is causing Americans to grow sadder.

“If you ask people ‘does anyone know you well,’ 54% of Americans say no one knows me well,” Brooks said. “The number of people who say they have no close personal friends has quadrupled over a generation, teenage suicide is up by 58%, depression is up by a similar amount.”

Later during the panel, Brooks and Friedman exchanged stories about American optimism and words of encouragement of how trust can be powerful. Friedman attributed the success of the Taiwanese company and global leading semiconductor developer, TSMC, to the trust its patrons have in the company.

“All these companies give [TSMC] their best designs and [TSMC] makes them; they never give Qualcomm’s to Apple or whatever. Everyone trusts [TSMC], and they leverage that trust,” Friedman said.

Friedman examined TSMC as a case-study, asking the audience to ponder why TSMC was so successful, and how China, who by all means should be at the same level as their Taiwanese counterpart, was not up to par.

Friedman left the audience amused with his interpretation of trust.

“Trust is the only legal performance-enhancing-drug,” Friedman said.