The alarm clock sounds at 5 a.m. as she wakes up to walk her dogs for a few miles. When she gets back, she quickly showers, dresses and heads to her 8 a.m. meeting with the school board. After that, she hurries to Frost Bank to check in with her assistants before rushing back out to organize other meetings, speak at various clubs and attend conventions. Around 9 p.m., she finally returns to her husband and home, ready to eat dinner and rest up.

It’s the end of just another workday for Karen Hunt. 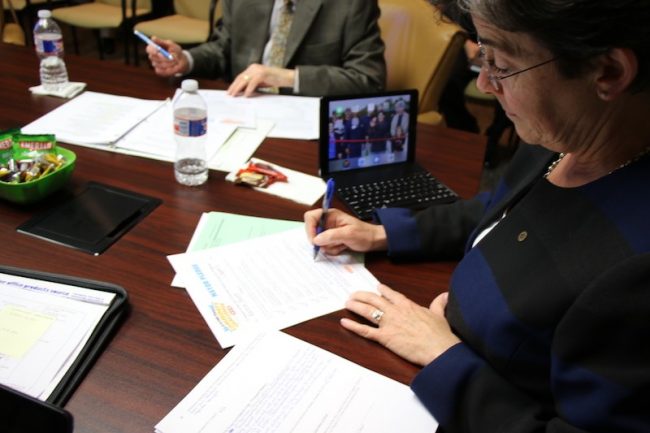 Hunt has been involved with Coppell City Council since 2008 and has been serving as mayor for the past six years. Also working in banking since she was a 16-year- old, her experiences within the industry in the DFW area led her to hold the prestigious position as Market President of Frost Bank in Coppell.

But the story begins back when she entered the realm of college life. As she told her story, she silenced her phone and put away all electronics to provide her full attention.

Fourth of five kids in the family, Hunt chose to attend Southern Methodist University and graduated a Bachelor of Business Administration from the Cox Business School in 1978. To attend a good business school? Yes. But also largely for the warmer weather.

Growing up in Fargo, North Dakota came with days of being snowed in. She first visited the university on a sunny day in February, and in that moment she whispered with a smile, “this is where I’m coming.”

And thankfully, her decision did not lead her wrong. As a student at SMU, Hunt enjoyed all the extracurricular activities and organizations that came with it including student government, the swim team, and greek life as a Chi Omega.

Hunt’s explanation of her leadership and involvement on campus lightened her face as she visited back in her memories. But when asked what her most memorable experience was as a student, her response was even more enlightening. 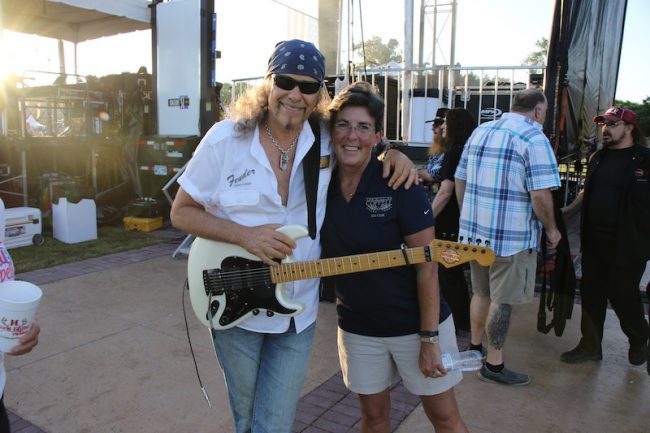 Her value in connectivity and involvement with people was expressed highly. But in contrast to her seemingly outgoing and social character, Hunt has always been one who prefers quiet time to herself.

“I am an extreme introvert so when I’m with people, that like sucks the life out of me,” Hunt said. “So I had to learn how to enjoy that without it being such an energy drain.”

So how did the introverted woman become the local Market President of Frost Bank and Mayor of Coppell? Through a slow process of practice and steps outside her comfort zone.

“I would see the person I wanted to be in loan and trust officers and they’d always go up and introduce themselves with ease,” Hunt said. “So at SMU, they helped you practice those skills and get more comfortable with appearing to be an extrovert.

As she practiced those skills through her large involvement within the community, running for office was never on her list of things to do.

“There was an opening and someone asked me if I’d run and I said no that’s not me, I wouldn’t do that and though I think the job would be fun, that’s not what I want to do,” Hunt said.

But there were still a few more pushes and an undeniable offer of help to run her campaign. As the pressure to run closed in, she was told that all being mayor meant was a couple of meetings a month and a lot of reading.

Hunt compared the job to drinking from a firehose all the information she was required to learn as she stepped into the position. From phone calls in the middle of the night to meetings after meetings, it came with responsibilities beyond expectations. But Hunt expressed her love for the job and shows no sign of regret.

She enjoys every bit that comes with being mayor, whether it is teaching people about how government works or even speaking to younger children.

“I can be a rockstar when I’m talking to elementary kids because they think it’s so cool,” Hunt said. “One of them asked me if I had met the President.”

Hunt continues to carry and hold these values and rewards today. The connectivity and ability to create intentional relationships with various people continue to serve as experiences that make the work worth it.

When asked about the obstacles or hardships she has faced throughout her career, she spends a couple minutes searching her mind for an answer until she laughs.

Yet through all the ups and downs, Hunt maintains a professional attitude and polite response. Her ability to do so has caught the attention of others, including fellow City Council members.

It doesn’t stop there. As part of the City Council, Hunt has grown a grateful heart for even the little things that many take for granted, such as turning on the water to brush teeth, being able to flush the toilet or even the absence of potholes on the road.

“There are a whole lot of not sexy things that the city does, but if the city didn’t do it, nobody else would,” Hunt said. “People just take that stuff for granted and don’t realize how much stuff goes into putting those things there.”

This large amount of work and effort often goes unnoticed, yet Hunt maintains a humble attitude which was evident in her response.

“I don’t think there is one person on the council that is looking for a thank you,” Hunt said. “When we opened up Andy Brown Park last year, to see how people were ecstatic and then to go out there on a Saturday afternoon and see how the park is being used, that’s how we get our thank yous. That’s what makes us proud.”

Having served four years on City Council and six years as Mayor of Coppell, Hunt doesn’t plan on quitting now. As her second term as mayor comes to a close this May, she looks forward to running for re-election.

But in the face of her busy schedule, she doesn’t allow her work life to bleed too far into her personal life. While she carries two phones and an iPad with her wherever she goes, Hunt makes certain to place the devices away during any meeting or any conversation because she says she wants to be there and intentional.

“I don’t want anyone to think I’m not accessible so the phone number on the website is my home phone number which my husband is kind of mad at,” Hunt says as she laughs. “But it’s there.” 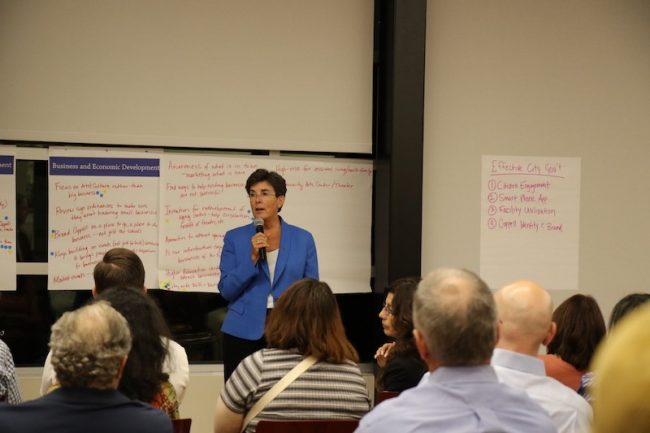 Hunt explains the ongoing projects and describes her typical day switching back and forth between being a mayor and local bank president. From 5 a.m. to late in the evening, her schedule is packed with back-to-back meetings and events that call for her presence. When asked why she would want to continue with such a stressful and chaotic schedule, she laughs.

“It has its moments, but I love it,” Hunt said. “And when you get to see how much care and respect that everyone has, it kind of renews your belief that mankind is good. It really does.”