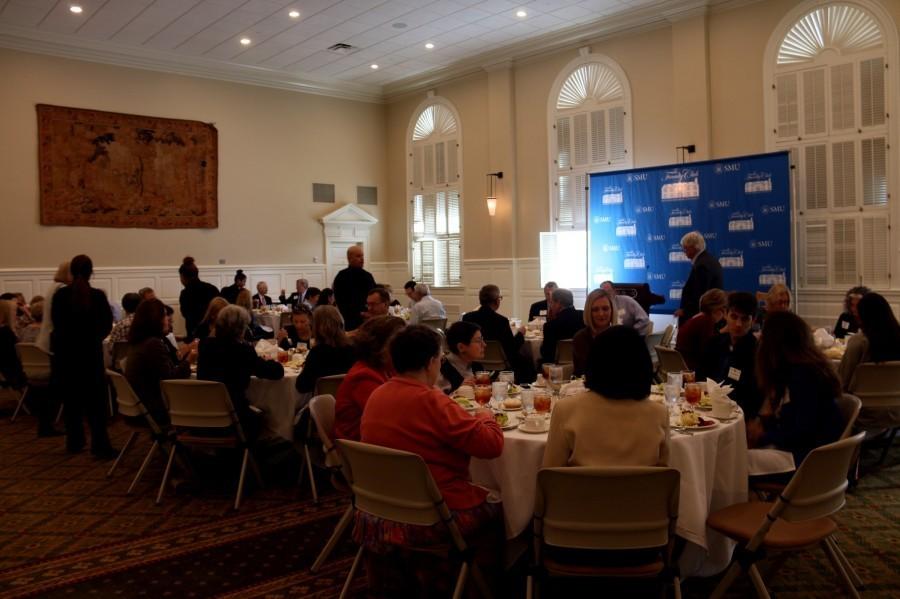 SMU political gurus Cal Jillson and Mathew Wilson were invited to speak at the SMU Faculty Club Luncheon on Nov. 2. The topic? The presidential election.

The gurus gave their expertise knowledge on what they think the outcomes of the election may be and thoughts on the presidential race so far, one that they haven’t witnessed before.

“The election as it stands today defies most conventional wisdom and models,” Wilson said.

Wilson expressed his disappointment in the overall presidential election.

“We shouldn’t be where we are,” Wilson said.

Despite the disappointment of most in this year’s presidential race and the candidates themselves, the race to the White House is a close one according to Wilson.

In states like North Carolina, Nevada and Florida, the margin is only less than a single point. However, Hillary Clinton does retain an advantage.

“Clinton is seen as having a 70 percent chance to win on Tuesday, according to real clear politics,” Wilson said.

What is really interesting in this election is that some new voter constituents are in play that have not been in the past years, according to Wilson.

“There are some demographic realignments in American politics that are shaking up the parties,” Wilson said.

The most interesting split to watch is the huge gap that has opened up between the preferences of college educated white voters and white voters without college degrees, according to Wilson.

“Donald Trump is doing better than any Republican candidate in history among whites without college degrees,” Wilson said. “That is the core of his coalition.”

Wilson does not think Trump would have any chance of winning this election if it weren’t for his core voters of Republicans without college degrees.

“If Trump were to get the normal support of college educated whites, he would be winning this election,” Wilson said.

In contrast, Clinton has a strong presence among minority groups.

“Hillary Clinton is going to win the strong majority among African-Americans, Latinos and Asian-Americans,” Wilson said.

However, what is not clear is the enthusiasm of these groups.

“Hillary Clinton may be underperforming in terms of enthusiasm among Black voters,” Wilson said. “But, Latino voters seem particularly energized in this election.”

This is can be attributed to the comments Trump has made about Latinos. Trump has to get at least 25 percent of the Latino vote in order to win the election, according to Wilson. Another interesting thing to note about this election is the unusual states that are in play.

“The other wild card scenario to watch out for is that the state of Utah is in play,” Wilson said.

Utah is traditionally a red state, but it would be a surprise if Donald Trump couldn’t carry Utah as a republican, according to Wilson. The state of Georgia may also be in play.

“They have a lot of moderately educated republicans who are turned off by Trump,” Wilson said.

Trump is performing well in Iowa even though it’s typically a blue state.

“Iowa houses a lot of the white uneducated voters that so well with,” Wilson said.

States are typically already decided as red or blue are in play this time around because Trump is a different kind of Republican, according to Wilson.

The Senate is also in play this presidential election, as 34 seats are up for election.

Jilson concurs that this presidential race has had various surprises.

“The presidential race has changed dramatically over the course of the last three weeks,” Jilson said.

The Republican party would have to redefine itself if Trump were to win, according to Jilson.

“They would have to define themselves going forward into the coming years and find ground between the traditional chamber of commerce, pro free trade and positions of the Republican party,” Jilson said.

Jilson believe that there are some significant dangers to the Republican party whether Trump wins or loses.

“The outcomes are just going to be of different sort,” Jilson said.