A man’s best friend… that’s how dogs are often described. To some, dogs are companions, friends, loyal admirers. But for others… they provide comfort and service. Emotional support dogs and service dogs can be a key support for people that suffer from anxiety, depression, visual or hearing impairment and more…

Alison Esparza is an SMU student who by saving her dog found salvation herself. “Around the same time, I found him I was starting to struggle a lot with depression and I have had anxiety for a long time as well,” she said.

Although some people might think emotional support dogs and service dogs are the same… there are quite a few differences between them.

“People do often get confused psychiatric service dogs and emotional support animals even though legally and training and wise they’re completely different,” she said.

Emotional support dogs provide comfort, a calming presence, and company… while service dogs are trained to help people with disabilities. 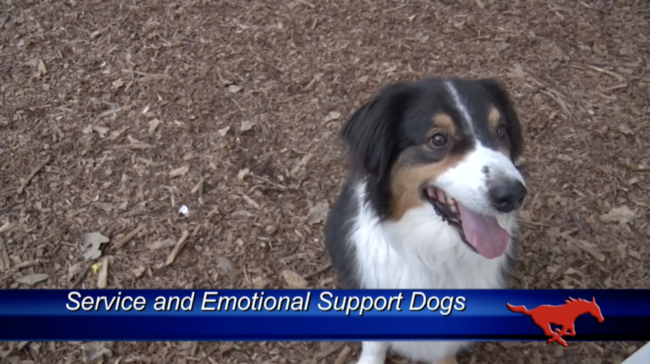 Zoey Wittlake, registered her dog Teddy as an emotional support dog as soon as she got him.

“Sometimes I get concerned that people think there’s something wrong with me when I bring teddy somewhere which really isn’t the case.. I’m completely normal,” she said.

Esparza, credits her dog, Monty for her well being.

” I really feel he’s the only reason I’m alive or have at least not tried to attempt suicide because every time that I have those thoughts of I’d rather be dead or whatever it might be I think of Monty and my responsibility to him and realize how much he relies on me and how much I rely on him and he keeps me safe,” she said.

Although Gallant claims SMU students have been overall very respectful. There are still some things she would like them to improve.

“I would really like to see business have a better understanding of the Americans with disabilities act,” she said.

It’s important to always be respectful and understanding of people with service dogs and emotional support dogs.