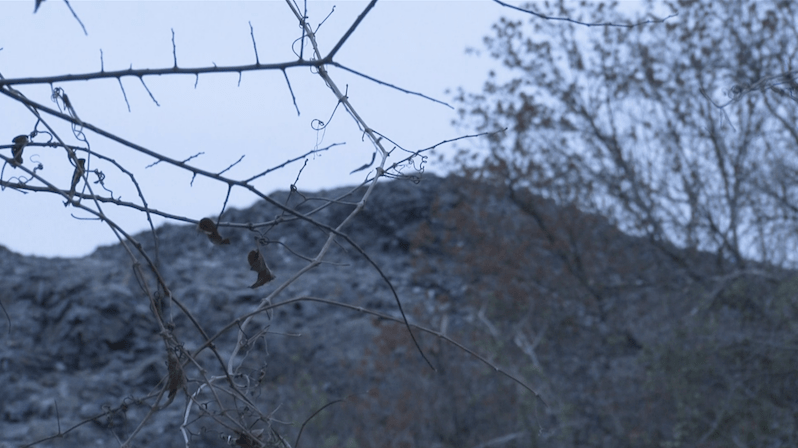 Protestors gathered outside of the George Allen Courthouse on Friday morning, November 22, 2019. They stood in the cold demanding the removal of Shingle Mountain, a pile of roof shingles that was dumped in South Dallas in January 2018.

“People just not understanding what we’re going through,” community spokesperson Marsha Jackson said. “It’s so easy for–maybe staying in North Dallas or any other kind of area. But what if it was next door to your house?”

Jackson spoke at the Nov. 22 court hearing about how Shingle Mountain has affected her health, her neighbors and her family.

“I have an 11-year-old granddaughter living here,” Jackson said. “My neighbors has three grandchildren. So, if anybody was riding down here, they would not see any children outside at all, ’cause the kids can’t come outdoors. Those children have been sicker also.”

Jackson is the chairperson of Southern Sector Rising, an organization based in South Dallas that fights environmental injustice and zoning problems.

“The reason this can happen in a southern sector is because of the zoning regulations–or the lack of zoning regulations–that are clearly racist,” Southern Sector Rising member Patricia Ridgley said. “And our city has a legacy of that.”

“It is an extreme example of what is happening in much of Southern Dallas,” Southern Sector Rising member Justina Walford said.

The future of shingle mountain and the surrounding community is still uncertain, but Jackson and the rest of Southern Sector Rising continue to be the voices for change in the community.

“My hopes is just give it to the city,” Jackson said of the Shingle Mountain property. “Let the city do something with it.”