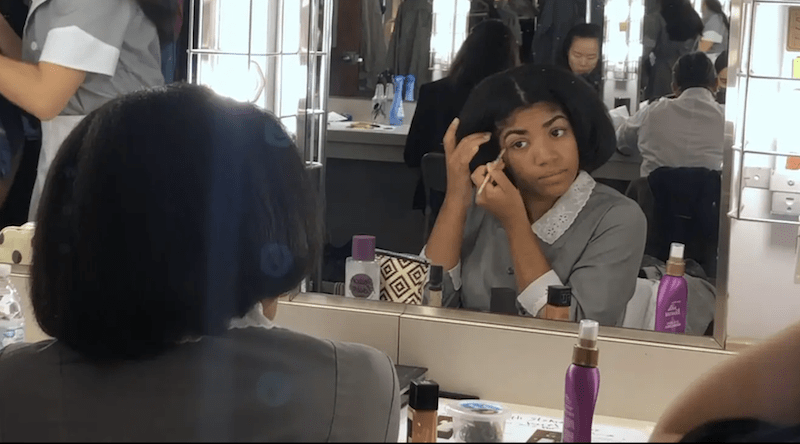 No play would be complete without perfectly tailored costumes for each character. SMU Theatre’s production of “We, The Invisibles,” which wrapped up back in October, was no exception.

“Having the costumes for this play specifically was so helpful because the moment I put the costume on, I was like, ‘Oh, I understand this character,'”SMU senior Jeliannys Acevedo said. “I know exactly where I live in.”

“We, The Invisibles” tells the story of Susan Soon He Stanton, who works at a luxury hotel in New York. She interviews the hotel’s staff after a maid accuses a powerful guest of sexual assault.

Senior Theatre student Sydney Lo played Susan. The actress said that the costume designs were key in bringing the show together.

“My costume for most of the show was a jacket,” Lo said. “Sort of like a blazer, a blouse, and then a pencil skirt. And that was really helpful, actually in getting kind of how presentational this person was. You know, she’s definitely a complex human, but her job requires who to look a certain way.”

Britney Remy, an SMU graduate student, was designed the costumes for the entire show, which required months of planning.

“We started the research process back in April,” Remy said. “From there, like over the summer, I pretty much designed all the costumes.”

Most of the costumes were standard hotel uniforms, but Remy made tweaks to help individualize each character.

“Once she designed the costumes based on the needs of the show, then those costume plates helped the actors create their characters,” Director Sara Romersberger said.

There were 62 different characters who appeared throughout the play, requiring some actors to play multiple roles and do quick costume changes.

“The costumes would be something where it’d be easy where they could take off one piece or put on something really quickly,” Remy said.

The costume designer says her favorite costumes for the show were the most unusual.

“Like that fur coat,” Remy explained/ “I had to, like, scour the web to find a coat that matched my rendering.”