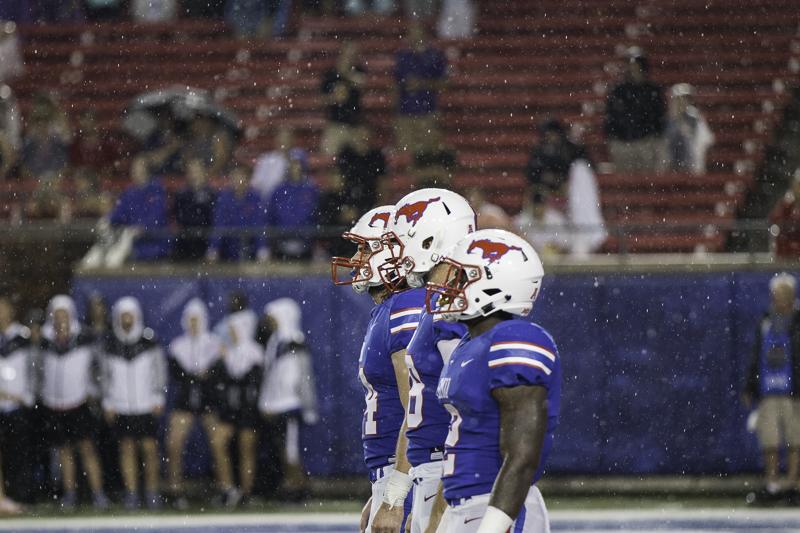 Will Brown has improved, but his consistency is still a question

Last year, Will Brown replaced Ben Hicks in Michigan Stadium and held his own against one of college football’s best defenses. But he struggled with consistency down the stretch and was benched in favor of Hicks following SMU’s loss to UCF.

With Hicks gone to Arkansas and transfer Shane Buechele yet to arrive, Brown was the starter during the spring game. While he made tremendous strides with his mechanics, which had been (and sometimes remain) wonky, Brown struggled in the spring game. He threw two interceptions and missed several passes badly. With Buechele coming in before the season, it seems Brown will sit for at least one more season and clean up some of the issues that have been holding him back.

CJ Sanders has what it takes to be the third receiver

After taking a medical redshirt last season, CJ Sanders is finally healthy. The Notre Dame transfer was mostly used on special teams in his time in South Bend, but he showed he could catch passes this spring. Sanders may be small (he’s only 5-foot-9), but he has tremendous athleticism that will make him a great option in the slot. He’s quick and agile, boasting a set of slippery moves that he uses to evade defenders.

He’ll line up alongside Reggie Roberson and James Proche, forming one of the best receiving corps in the American Athletic Conference. Look for SMU to try to get Sanders into space and in situations where he can make an impact.

The line still has a few holes to patch

The Mustangs lost three starters to graduation last season, including the whole left side of the offensive line. Still, several players saw significant playing time, due to injuries and reshuffling, and they’ll return this season. However, the line remained inconsistent this spring and allowed pressure on SMU’s quarterbacks during the spring game.

Outside of Alan Ali and Hayden Howerton, SMU’s offensive line has just 11 starts between them. Nick Dennis and Beau Morris were in and out of the starting lineup last season, starting two and three games respectively. Tackle Jaylon Thomas started the last six games and played well.

Newcomer Kobe Bryant still looks to be adjusting to the speed of the college game. If he can improve during fall camp, he could possibly work his way into the lineup. Another name to watch is Kadarius Smith. He made tremendous strides during the spring and worked his way into the picture.

The offensive line may be a spot where SMU needs to land a grad transfer. But this line needs to improve, because it had a hard time creating space for the running game last season. SMU ran for less than 100 yards in half of its games last season and it averaged less than three yards per carry in all of those matchups. The team needs to be able to run the football this season to be successful.

The secondary is thin

SMU’s secondary looked like it’d be a strong point after the 2018 season, with all but one starter returning. Then Elijah McQueen had to retire due to medical issues and Mikail Onu left the program. That left SMU thin at the safety position.

During the spring, SMU’s corners were banged up, exposing a concerning lack of depth at that position. The team brought in Sam Westfall, a JUCO transfer out of Arizona, to try to patch the holes, but that may not be enough. The team needs one more experienced player, because everybody in the secondary is a question mark, as Eric Sutton, Robert Hayes, Kevin Johnson, Ar’mani Johnson and Terry Keyes all missed time during the spring.

Trevor Denbow moved back into the secondary to fill the hole left by Onu’s transfer. He looked solid in the spring, but his experience is a question mark. Behind him, SMU has Collin Rock and then a host of young players with very little experience. At the other safety spot is Rodney Clemons, who will start for the third season in a row. He should be solid.

Things are looking up

There’s holes and there’s question marks, but SMU is in a much better spot than it was this time last year. There’s playmakers at receiver and depth at linebacker and along the defensive line. The team has shown that it has a host of playmakers on both sides of the ball, which it did not have last spring.

With an improved running game and Buechele at the helm, SMU’s offense should improve. If its defense can repeat its strong 2018 performance, there’s a chance that the team could compete for the West division title.