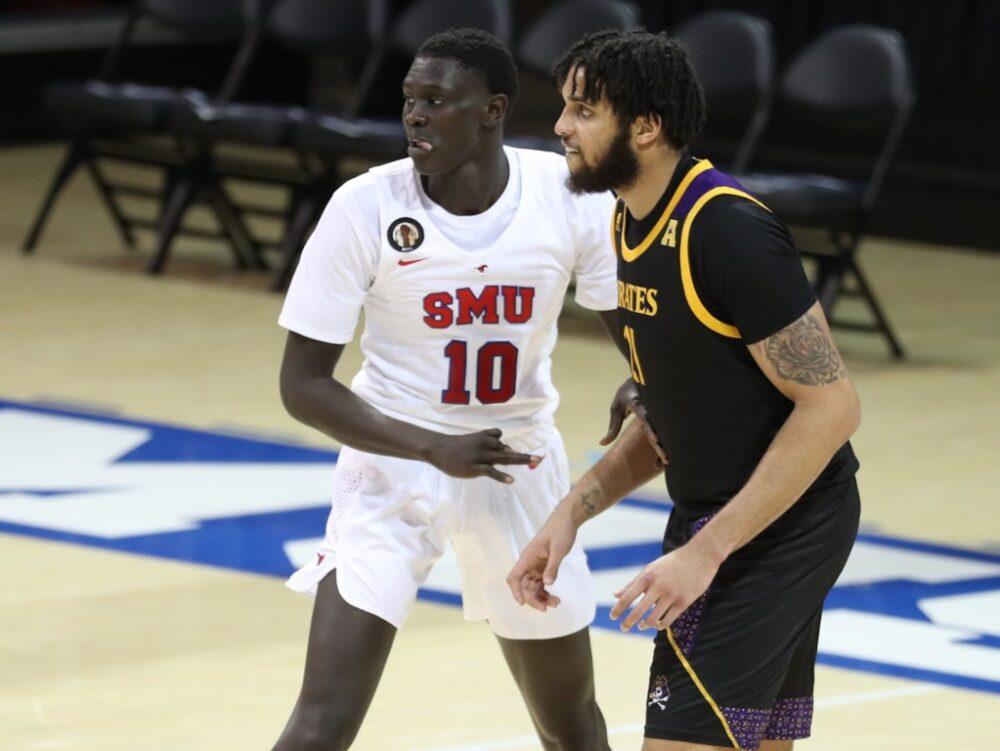 UNIVERSITY PARK, Texas — When Yor Anei woke up last Wednesday, an ostensibly quiet Dallas morning before the vestiges of the holiday took hold, he did so with a mix of trepidation and eagerness.

He was told in the days leading up that he would have a chance to play in his first college basketball game in 280 days. The memories of the last time he had touched a basketball in any meaningful capacity, all the way back on March 11 in Kansas City, naturally crept into the recesses of his mind.

But plenty had happened, maybe even too much, between March and his current state of affairs to distance that memory into obscurity.

In under a year’s time, Anei had transferred schools in the middle of a pandemic, from Oklahoma State to SMU.

He had gone through the grueling, and oftentimes never-ending, process of a waiver application to play immediately. He had been hospitalized. And, the day he was scheduled to make his debut, he had just come out of contact tracing for COVID-19.

But with all that as the backdrop to SMU’s conference-opener against East Carolina, Jankovich made the phone call two and a half hours prior the game that Anei was cleared to play. Made official by paperwork signed right before the team walked out for the national anthem, Anei made his unlikely debut in front of a mostly empty gym.

“Today was crazy,” Janovich said. “We were scrambling to get the paperwork and sign it. But it is just good to have him.”

And the scrambling to get paperwork done on the day of the 6-foot-10 center’s SMU debut was emblematic of a hectic, uncertain and even improbable return to the college basketball world for Anei. After all, just weeks ago, the Kansas native was sitting in a hospital bed unsure of his athletic status.

Soon after Anei arrived at SMU, meeting Jankovich in-person for the first time on June 15 when the team reported for preseason workouts as a result of COVID-19, he developed a wrist infection.

Doctors then placed a PICC line in his arm, shorthand for a peripherally inserted central catheter.

It is a rather rare procedure, according to the Mayo Clinic, that is only used for “serious infections.” The PICC line allows doctors to pump antibiotics into the larger veins near the heart to stop infections.

“It was pretty serious… I couldn’t exercise for a month. I just had to relax and focus on school. I just had to help the team from a distance really. It was kind of tough,” Anei said.

Anei spent weeks away from practice. He admits he is not even close to game shape, where 13 minutes on the court tired him on Wednesday.

“I was a little winded,” Anei said sheepishly after the game.

But even as Anei trotted out on the court at maybe less than the lung capacity necessary to be a major contributor, he got his momentary respite. Almost snatching the ball out of the air with his seven-foot wingspan, he recorded one of his trademark blocks he had become known for. The bench got up and started yelling accordingly.

It was the moment where Anei’s seven-month process had appeared to come full circle, even if it is far from over.

On the basketball side of things, SMU will certainly welcome his presence. He fills a lot of needs on a team that is 5-0 and may have a legitimate path to the NCAA Tournament.

He is the defensive anchor in the front court, a place where SMU needed depth. Within two years at Oklahoma State, Anei nearly became the all-time leading shot blocker for the program.

On offense, he also averaged 8.1 points a game. Stepping into a front court with Isiah Jasey, a defensive-minded player, this could be the boost SMU needs on offense.

“He brings that defensive anchor to our team,” Charles Smith IV said. “With Yor down there we know we have a rim protector and nothing is going to be easy at the rim.”

But it will take some time for Anei to get to the point where SMU can rely on him. The team will have another week off before it plays again, a chance for Anei to string together practices consistently for the first time.

He finished Wednesday with two points, three blocks and one rebound. But the real headline of the story was when Anei sat down in a Zoom conference room after the game, fidgeting with his zipper and smiling. He joked that he was “pretty tired” and smiled about his blocked shot.

“I got back, and I am back now,” Anei said, shrugging his shoulders.