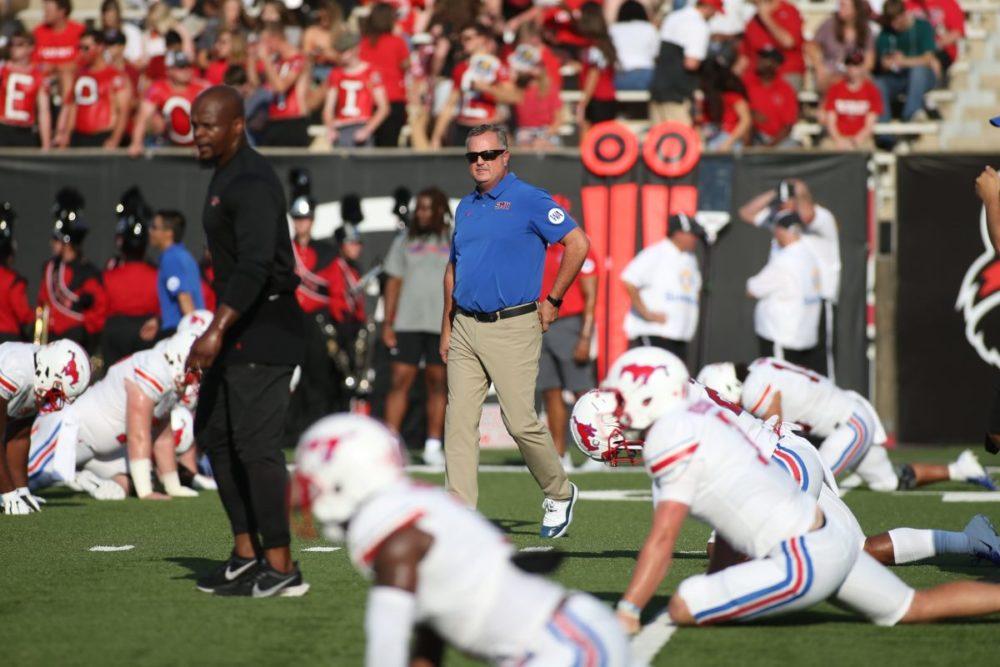 SMU needs no reminder of the turbulence that is college football scheduling amid the coronavirus. The last two weeks have afforded the athletic department a front row seat to the process.

Less than 14 days ago, on July 30, Athletic Director Rick Hart publicly expressed that SMU remained committed to playing a full schedule. At which point, SMU remained one of only six FBS schools in the country to have all of its games in 2020 intact.

“We want to play all of those games,” Hart said on SMU’s Coaches’ Corner.

Days later, on Aug. 3, TCU informed Hart that it would be canceling its game in Dallas as the Big 12 moved to a conference-only, plus-one scheduling format for the upcoming season. SMU’s only Power 5 opponent was wiped off the slate in hours.

The novelty of these changes is not lost on those in the college football world. Altering nonconference games is a rarity. The process of assembling nonconference schedules usually moves at a glacier-like pace with contracts signed years in advance. Take SMU’s 2020 game against Texas State as a prime example. Although scheduled for 2019 and 2020, SMU signed its contract to play those games in 2015. Or, to do one better, when SMU plays North Texas in 2025, that contract will have been signed in 2018.

A bigger undercurrent to these cancellations, though, remains the financial burden on teams when games go unplayed. Visiting teams, especially from non-Power 5 conferences, will often receive a sum of money for traveling and participating.

The Daily Campus obtained the contracts for SMU football’s three remaining games in the nonconference schedule to evaluate the impacts of potential cancellations. Here is a breakdown of what they said.

The current contract, signed in 2017 by Hart and North Texas Vice President and Athletic Director Wren Baker, is set to expire in 2021. However, SMU signed a separate contract in 2018 that extended the home-in-home format of the series until 2025.

SMU remains scheduled to travel to Denton on Sept. 19 to play North Texas with the return game set for Sept. 11, 2021.

In the contract, there is no payment made to the visiting team in the series. The only stipulation is that if a forfeiture is made by either team, that program must make a payment of $500,000 to the other member party.

In the event the game is canceled this season due to the coronavirus, however, the contract states that it will not be considered a forfeiture by either program.

“The forfeiture fee shall not apply if forfeiture of the competition occurs by reason of: impossibility of performance; reclassification; or mutual written agreement of the teams,” the contract reads.

Presumably, if the 2020 game is canceled in Denton, the series would continue as scheduled in Dallas in 2021.

“If either team forfeits a Competition, this Agreement shall continue for the remaining scheduled Competitions,” the contract reads.

The game against SFA does come with a payout for the visiting program. SMU would pay SFA $375,000 for coming to Dallas in 2020. It is not a home-in-home contract.

The lone matchup between the two programs, still scheduled for Sept. 12, does have a stipulation that would allow SMU not to pay SFA in the event the game is canceled due to an “exigency beyond [their] control.”

“Acts of God, acts of common enemy, civil disorders, or orders of military or civil authority may render it impossible or impractical to play the game agreed to hereunder. In such event, neither party shall be held in breach,” the contract reads.

This has come under particular scrutiny as college football programs have been forced to cancel nonconference games. Texas A&M just recently informed North Texas it would not be paying the athletic department after their buy game was canceled when the SEC opted for a conference-only schedule.

SMU’s contract with SFA, signed by both Hart and SMU Vice President for Business and Finance Christine Regis, was signed in 2016.

The home-in-home series with Texas State is set to expire at the end of this season for SMU. The return game at Texas State, which is still schedule for Sept. 5, does not come with a visiting team payment. The forfeiture fee is also $500,000.

The coronavirus, like in other contracts, would not be counted as a forfeiture for either program.

Interestingly, this contract signed in 2015 has been amended several times to push the date of the return game in San Marcos back. Two weeks ago, however, both parties moved the game up to August. Yesterday, Texas State announced it was pushing back the potential season-opener back to the original Sept. 5 date.

American Athletic Conference Commissioner Mike Aresco, in an interview with The Dallas Morning News, indicated the game between SMU and Texas State is still a fluid situation because of the early date of competition.