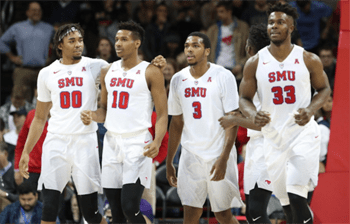 Week 4 of American Athletic Conference play created further separation between the teams at the top and teams in the middle. The Daily Campus writer Reece Kelley Graham is back with our latest power rankings.

Week 4 saw Cincinnati on cruise control, easily handling Temple and Tulane without much extraneous effort. Temple did lead at halftime, but the Bearcats did not have much trouble putting the Owls away. Cincinnati has now had two close calls with Temple this season, but was able to survive both. The majority of teams in the AAC seem unable to mount a serious threat against the Bearcats, but crosstown rival Xavier may be able to hand Cincinnati its third loss in a late non-conference game this week.

SMU’s statement wins over Connecticut and Houston this week should leave little doubt in people’s minds that the Mustangs are playing the best basketball in the AAC right now. Both performances were dominant and should serve as a reminder of why Moody Coliseum is so feared. SMU limited UConn’s Jalen Adams, Rodney Purvis and Amida Brimah to less than 10 points combined. The Mustangs also neutralized everyone on Houston’s roster not named Rob Gray Jr. or Damyean Dotson. Shake Milton scored 50 points on the week and SMU’s offensive attack is really starting to take shape. If the Mustangs can survive a meeting with Central Florida in Orlando next Wednesday, SMU will enter the second half of conference play primed for a great finish.

Memphis had an impressive week, stealing a win in Houston and taking down a Central Florida team still learning how to win big games on the road. Four Tigers scored 20+ points against the Cougars, with the Lawson brothers putting up duel 28 point performances. The AAC needs Memphis to be relevant, and the Tigers are becoming a team nobody wants to see on the schedule.

Central Florida dominated its much weaker “War on I-4” rival, but a win over the Bulls will not be raising many eyebrows. A win over Memphis could have catapulted the Knights into the top of the conference, but Central Florida is still learning how to win close games and games in tough environments. SMU comes to town this week. How will the Knights respond up against an elite, battle-tested Mustangs squad?

A little over a week ago, Houston had a lock on the status of 3rd best team in the AAC. Three losses later, Central Florida, Memphis and SMU have exposed some serious deficiencies normally hidden by stellar Houston shooting. The Cougars do not have the multifaceted offensive attack to do damage against elite defenses. Three-point shooting can carry the Cougars when everything goes right, but three straight losses are a sign that Houston needs to regroup. The pieces to win are still there.

The Huskies had an opportunity to change their fortune with a win over SMU in Dallas, but instead got put through the meat-grinder. Jalen Adams, Rodney Purvis and Amida Brimah were a non-factor, leaving Kentan Facey and Vance Jackson to do the heavy lifting. Adams and Purvis led UConn in scoring against East Carolina, but the Huskies won by only seven against a Pirates team that struggles to score. Two wins this week would put UConn over .500 in conference play.

This week resulted in two more wins for a Golden Hurricane squad putting together a sneaky good AAC resume. Tulsa has not hit its most difficult stretch of conference play, but the Golden Hurricane have found success despite inexperience and are winning the games they should win. With so much youth, Pat Birt and Sterling Taplin are carrying the team in every game.

Temple had one job this week: beat Cincinnati. After coming close to doing so in Philadelphia, some thought they had a shot to pull off the upset in Fifth Third Arena. The Owls could not get it done. Temple has now lost 6 of its last 7 games with Memphis and Houston up next.

Kentrell Barkley and Caleb White are the only Pirates that can be relied upon for big numbers right now. The offense just is not there for East Carolina. With Jeff Lebo away from the program (hip surgery), winning these important games becomes more difficult. East Carolina has lost its last six.

The Green Wave looked respectable in both losses this week and came closer to upsetting Tulsa on the road than maybe anyone thought possible. Cameron Reynolds had a 40 point week and has done a nice job replacing the production Tulane lost in the offseason.

South Florida is still winless in conference play, seemingly unable to pull itself out of this slump. The simultaneous loss of star guard Jahmal McMurray and head coach Orlando Antigua have thrown this program into a tailspin. There are many opportunities left to win, but the upcoming week will prove difficult.