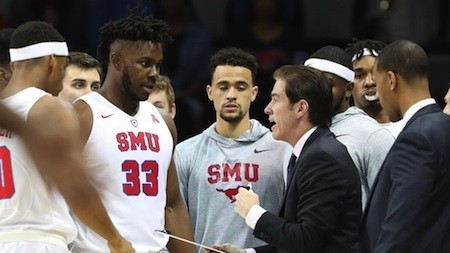 Another week of surprising outcomes leads to another week of separation for the American Athletic Conference’s top teams. The Daily Campus writer Reece Kelley Graham is back with our updated AAC power rankings.

Cincinnati had the best week of any team in the AAC, adding a signature win over a ranked team to the conference’s resume. The eight point thumping of crosstown rival Xavier came in a more dominant fashion than the score would suggest, as the Musketeers’ Trevon Bluiett scored more than half of Xavier’s total points by himself. Only one other player scored in double figures, showing how effectively the Bearcats’ defense can shut down even a potent offensive attack from the Big East. For good measure, Cincinnati easily dealt with South Florida. The Bearcats are earning more national attention by the week, good news for any AAC team who can pull off the upset against them.

The Mustangs survived their trap game in Orlando, grinding out a win over Central Florida with a rotation of only six, count ’em, six scholarship players. SMU will take it, especially considering all of the strange scores that have come out of CFE Arena this season. It was the kind of win that most likely felt extra gratifying once seated on the flight home to Dallas. Now halfway through AAC play, SMU has played as expected with an 8-1 conference record. With a possible regular season conference title run ahead of them, the Mustangs need to regroup and focus on the road ahead. SMU needs Jarrey Foster to be healthy, and the team’s week off could not have come at a better time. Like Cincinnati, SMU appears to be getting better by the week. Shake Milton is catching fire at the perfect time and is truly showing his potential to be an elite guard at the college level and beyond.

A week at home is just what Houston needed to get back on track after three consecutive losses. However, the comforts of home might be short lived with Central Florida coming to town next. Facing the team with the best field goal percentage defense in the nation, the Cougars will need to get creative on offense and refrain from relying on desperation three’s to win. Who belongs in the AAC’s third spot has been hard to figure all season and this week’s game against the Knights could provide some clarity.

Memphis split its games this week, but did not look great overall. The Tigers were tied with the Owls and trailed the Pirates at halftime respectively. Low scoring efforts have become a theme of Memphis in conference play and the Tigers have no excuses. Memphis has an explosive frontcourt and one of the best surprises in the AAC this season in guard Markel Crawford. Memphis is sub-100 in offensive efficiency per KenPom, but has the pieces to do better.

A loss at the hands of SMU? Expected. A loss at the hands of Tulsa? Not so much. B.J. Taylor and Matt Williams single handily kept the Knights in the game against SMU and only because the Mustangs faded off the perimeter. The trend continues: as Tacko Fall goes, so does Central Florida. SMU and Tulsa neutralized Fall, limiting the 7-6 center to 14 points combined. The Knights do not rely on him, but do feel when he is not on the floor. Having to shift gears so often might stymy the entire team’s production.

Two wins over the teams at the bottom of the conference have finally gotten Connecticut over .500, in conference play that is. Rodney Purvis is once again scoring like his old self and Vance Jackson is developing quickly behind Amida Brimah and Kentan Facey. Despite the rough start against the Green Wave, the Huskies have now put together their first three game winning streak of the season. Connecticut gets to play in the conference tournament by default – teams with no defense beware.

Tulsa’s loss at East Carolina is a perfect example of what happens when Pat Birt and Sterling Taplin have bad nights simultaneously. Junior Etou’s 31 points kept it close, but it was not enough. Foul trouble helped the Golden Hurricane out in a big way in Orlando, as Tacko Fall and Tank Efianayi combined for only six points. Junior guard Corey Henderson stepped up in both games and put together a 26 point week.

Two words: Shizz Alston. Alston posted 22 points against Memphis, a game high for both teams. Along with Quinton Rose, Temple has found a pair of dynamic scorers that can do a bit of everything for the future. Both are highly athletic and will be around for awhile. Memphis was an opponent many would have expected Temple to beat weeks ago before the Owls collapsed at a beginning of conference play. Temple is too far gone to earn its way back into the postseason, but has the potential to do damage against anyone left on its schedule.

East Carolina received a lot of help from Tulsa, but the Pirates finally snapped a six game losing streak in a low-scoring bout. Kentrell Barkley has emerged as the only consistent scorer for East Carolina. The sophomore guard was one of only two Pirates to score in double figures against both Tulsa and Houston.

Tulane led Connecticut by 13 points in the first half, in the XL Center. That is worth noting. All five Green Wave starters scored in double figures against the Huskies, but Tulane received only eight points off the bench. Tulane also allowed Connecticut to score 30 points from the charity stripe.

Connecticut and Cincinnati does not make for the easiest week. Troy Holston remains a consistent contributor and freshman Michael Bibby lit it up this week with 31 total points. The upcoming week is not much easier with Memphis and Temple on the schedule.