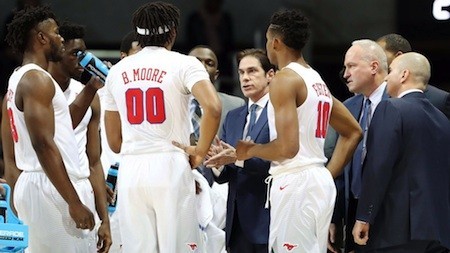 Week 6 of American Athletic Conference play saw Cincinnati and SMU continue to dominate as the race for a first round bye in the conference tournament heats up. The Daily Campus writer Reece Kelley Graham is back with our latest power rankings.

Cincinnati is the only remaining undefeated team in AAC play, but this week proved that the Bearcats are not immortal. Cincinnati barely survived a trip to the Reynolds Center, needing some Tulsa turnovers and late heroics from Troy Caupain to escape with the win. The Bearcats took care of business against Connecticut later in the week, but probably should have won by more than 14 at home. A new playmaker steps up for Cincinnati in every game, making the Bearcats very hard to put away.

SMU is currently playing the best basketball in the AAC, having won its last five conference games by a 109 point margin. A Mustangs team once known for winning games on the defensive end is evolving into a top 25 team in offensive efficiency. The “interchangeable parts” philosophy is working and SMU is becoming increasingly harder to defend as the Mustangs’ synergy becomes more refined. Shake Milton’s confidence at the point is growing, and it shows. Milton has scored 107 points by himself in SMU’s last five games while leading the team in scoring three times. The Mustangs have the momentum entering a week in which the team travels to Temple before hosting Cincinnati. Remember SMU’s showdown against the Bearcats in 2014? This season’s game has that potential, if not more. It is going to be a real slobberknocker.

Houston wrapped up its three game homestand with an impressive win over Central Florida. The Cougars live and die by the three ball, and Damyean Dotson hit seven shots from the perimeter. Galen Robinson posted 14 points, though he did most of his damage inside. More importantly, Houston took 7-6 center Tacko Fall out of the game, which has become a trending “key to the game” for those playing the Knights.

Central Florida’s loss to Houston on the road can be forgiven after the Knights torched Memphis in Orlando. Central Florida’s biggest lead was 18, but it felt like much more. Four Knights scored in double figures, including a 20 point night from Matt Williams, one of the AAC’s most underrated guards. Who coincidentally scored 15 points in Central Florida’s 15 point win over the Tigers? Tacko Fall. It is becoming more apparent how critical his production is to the Knights’ success.

The Tigers did not look like themselves on this week’s Florida swing, defeating the Bulls by only 10 before being blown out at the hands of the Knights. Dedric Lawson did his thing, scoring 57 points on the trip, but everyone else seemed off. Central Florida held all except Lawson to single digits and held Markel Crawford scoreless. The Tigers’ February schedule does them no favors and could make or break their chances for a first round bye in the AAC tournament.

The 14 point margin does not adequately tell how much trouble the Huskies had in Fifth Third Arena this week. Jalen Adams scored only eight points after finding himself in foul trouble early. Rodney Purvis looked like his old self, but it was not enough. Connecticut is back to .500 in conference play and still has two more in the loss column overall.

Tulsa probably had the best week a team could have while losing both of its games. The Golden Hurricane came so close to shocking Cincinnati before coughing the ball up one too many times. Upsets should not be expected when a team commits turnovers on more than 20 percent of its possessions. Tulsa held close with SMU until halftime, but then Shake Milton and Sterling Brown went off.

Shizz Alston and Quinton Rose are names to remember. As a sophomore, Alston is putting up some serious numbers and Rose might be among the most athletic, well-rounded players in the conference. Five Owls scored in double figures in Temple’s win over South Florida.

SMU exposed East Carolina’s biggest deficiency: the Pirates inability to score. The Mustangs ran up the score on East Carolina and the Pirates had no way of keeping up. East Carolina ranks last in the AAC in offensive efficiency and effective field goal percentage.

Tulane lost both of its games this week by less than 10 points, which is a sign of improvement. The Green Wave are top 100 in the nation in offensive tempo and use speed to their advantage. Cameron Reynolds posted 29 points against Temple and continues to be Tulane’s only dependable scoring option.

Much like Tulane, the Bulls prevented Memphis and Temple from walking all over them. Malik Fitts, Michael Bibby, and Tulio Da Silva, three freshman, led South Florida in scoring against Memphis. Geno Thorpe posted a game-high 25 points against the Owls.