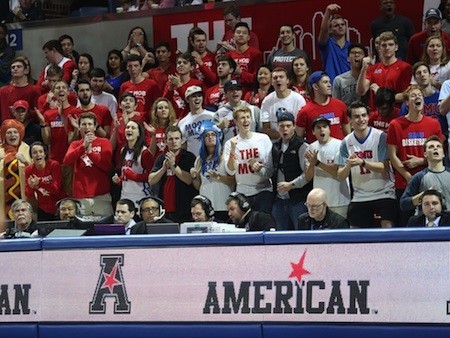 Week 7 of American Athletic Conference play saw some surprising outcomes and a nominee for conference game of the year. The Daily Campus writer Reece Kelley Graham is back with our updated power rankings.

Armageddon has come and gone, and SMU is sitting pretty on top of the AAC standings, even if only by a half game. Sunday’s brawl against Cincinnati was everything we hoped for and really showcased how close the teams at the top of the AAC are. The Mustangs and Bearcats have now split the series in three of the last four seasons, with those wins coming on respective home floors. Cincinnati entered Sunday’s game as the notable team from a conference having a down year. Now there are two notable teams. Nobody is sleeping on SMU anymore. The Mustangs completely neutralized the Bearcats’ inside presence on offense. Semi Ojeleye proved himself as a star talent, as if there was any doubt. Sterling Brown played tough as nails and Shake Milton showed everyone that he can win big games at the point. Ben Emelogu, the most talented player on the team that everyone forgets about, came up big as well. Sunday’s win gave SMU a slight edge – an edge that has been slipping away from the Bearcats since the beginning of the month.

| RELATED: SMU toughs one out in Philadelphia, beats Temple 66-50

Cincinnati has consistently played like a top 25 team all season and has taken care of business the entire step of the way. With only three quality losses, the Bearcats have established themselves as a serious March threat in the minds of coaches and basketball writers everywhere. Cincinnati entered Sunday’s game riding a 15-game winning streak, but for as good as the Bearcats are, even that needed some luck. Cincinnati won five of those games by a margin of seven points or less. Their luck ran out in Moody Coliseum. The Mustangs frustrated the Bearcats on offense, taking away everything except the perimeter. Cincinnati wins games with the multi-dimensional attack it was not allowed to have on Sunday. The Bearcats have the skill and depth to make a serious NCAA Tournament run. If SMU and Cincinnati meet once again in the conference tournament, buckle your seatbelt.

Following its loss to SMU in Dallas, the Cougars have quietly won five games in a row. Damyean Dotson has exploded for Houston, having scored 20+ points per game during that stretch. The Cougars may be out of contention for the one or two seed in the conference tournament, but still lead the middle of the pack in the AAC. Houston has the offensive weapons to ruin anyone’s night and the Cougars will need all the points they can get for their upcoming stretch: SMU, Connecticut, Memphis and Cincinnati.

Memphis had another odd week, shutting down Tulsa before suffering a baffling 12 point loss at home to Temple. Dedric Lawson and Markel Crawford once again did most of the heavy lifting in that game, but other Tigers must step up. Temple deserves credit as the Owls looked like the team that upset Florida State and West Virginia earlier this season, but that does not make this loss at home any less confusing for Memphis.

Here they come, like they always do. Unless Connecticut can win the AAC Tournament, the Huskies season will most likely end without a postseason appearance. But, Connecticut is figuring out how to work around injuries and this was its best week of the season. The Huskies blew out South Florida before upsetting Central Florida in Orlando. Rodney Purvis point total on the week? 41. The senior guard has once again found his stroke and Connecticut has won five of its last six.

The Knights began conference play with a lot of promise, but have fallen apart down the stretch. Central Florida has lost six of its last seven games. The breakout team of the AAC has won only one game since Jan. 22. The loss to Cincinnati is forgiven, but the poor effort shown against Connecticut is not what the already in decline Knights needed. 7-6 center Tacko Fall scored only six against the Huskies after finding himself in early foul trouble.

Temple’s win over Memphis in the FedEx Forum seemingly came out of nowhere. The Owls have now swept the season series against the Tigers. Temple’s great non-conference showing did not carry over into conference play, and that is why a road win in a tough environment was unexpected. Four Owls scored in double figures against Memphis, including 18 points from freshman guard Quinton Rose.

Tulsa has lost four straight, but against tough opposition. Still, three of those losses took place at the Reynolds Center, and the Golden Hurricane desperately needed at least one to go their way. None did. No player scored in double figures against Memphis and none of Tulsa’s major producers posted more than eight against Houston. After hanging out near the top of the conference for some time, Tulsa is down to .500 overall and in AAC play.

East Carolina had only one game this week, a game that was winnable. Normally the Pirates lose by not scoring. But that was not the case this time as three players finished in double figures. East Carolina’s normally dependable defense faltered. The Pirates allowed South Florida 39 points off the bench, hence the loss.

South Florida finally earned its first conference win, and it took a team effort. After getting blown out up in Storrs, the Bulls got sick of losing. A win over East Carolina will not turn many heads, but getting 39 points of production of the bench will surely improve moral.

Houston simply overpowered the Green Wave this week with tree Cougars scoring in double figures. Damyean Dotson posted 32 by himself. Tulane’s defense ripped like tissue paper. The Green Wave spread the wealth on offense, but could not score nearly enough. Tulane has now lost eight straight.