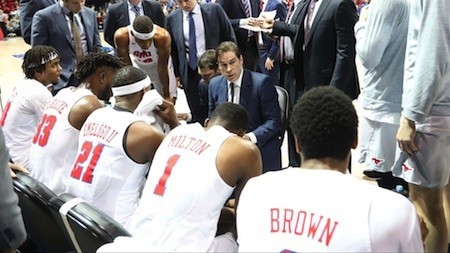 Week 8 of American Athletic Conference play saw SMU and Cincinnati continue to lead the way despite some shaky performances. The Daily Campus writer Reece Kelley Graham is back with our latest power rankings.

SMU’s week began with a bit of a scare, but ended on a very high note. The Mustangs pulled off two comeback wins after trailing both Tulane and Houston at halftime. SMU weathered some uncharacteristically good shooting by the Green Wave and some less than perfect officiating in a hostile environment in Hofheinz Pavilion. Semi Ojeleye scored 41 points this week with Ben Moore, Sterling Brown and Jarrey Foster posting double figures in both games. The Mustangs have now matched their longest winning streak of the season, but have needed comeback wins to do it. SMU has now had to overcome deficits of 9, 15 and 13 in its last three games, winning them by a margin of only 24. The Mustangs are still playing the best basketball in the conference as of now, but slow starts could hurt SMU later on if the trend continues. The Mustangs played with a six-man rotation during that three-game stretch, making the string of comebacks even more impressive. SMU has virtually no depth, but might be the most resilient team in college basketball this season.

Cincinnati’s week also began with a less than spectacular performance, winning at South Florida by only 14. The Bearcats’ defense once again took care of business, but the offense was not firing as normal. Cincinnati posted 94 points on the Bulls earlier this season, but only four Bearcats scored in double figures this time around. No player scored more than 14. Cincinnati looked back to normal against Tulsa, leading by as much as 27 in the second half. The Bearcats have four games remaining, all against opponents currently 5th place or better in the AAC.

Houston spent the entire week preparing for SMU and the Cougars gave the Mustangs their best effort. However, ticky-tack officiating may have prevented Houston from taking its best shot. Fans, coaches and players on both sides were left frustrated. Four Cougars fouled out. Rob Gray Jr., the AAC’s leading scorer, sat on the bench for a large portion of the second half with four fouls. He scored a game-high 23 points, but even that was not enough. Houston must now focus on holding off Connecticut for third place.

Connecticut has won seven of its last eight games and might be the AAC’s hottest team. The Huskies are far from the best team, but Connecticut was in a dark place a month ago, sitting below .500 overall and in conference play. The Huskies have pulled off three wins in a row, winning by a combined margin of seven points. It may not be pretty, but Connecticut is doing all it can to earn a first round bye in the conference tournament. In the AAC, the road to March goes through Hartford.

Memphis has lost three of its last four games and suffered a complete collapse in Hartford this week. Scoring is starting to become an issue for the Tigers. Beyond Dedric Lawson, K.J. Lawson and Markel Crawford, nobody is producing consistently. Memphis often receives little help off the bench, as was the case against Temple. Dedric Lawson might be the MVP of every game he plays, but he is the Tigers’ only impact player to show up on a nightly basis.

Central Florida finally bounced back this week, earning back-to-back wins for the first time since early January. The competition was not stiff, but the Knights will take any win after losing six of seven entering the week. Both wins came without heavy involvement from 7-6 center Tacko Fall as well. Central Florida has leaned on their big man all season despite having lots of talent on the perimeter. The Knights perform better when they spread the love efficiently.

Tulsa has lost six straight, but the schedule has done them no favors. The Golden Hurricane have been flattened by the AAC’s elite despite playing some really good basketball. Tulsa came close to upsetting Cincinnati in that stretch and played Houston closely. The Golden Hurricane are good enough to surprise anyone in the conference when everything goes their way. Turning the ball over on 22 percent of possessions is not the optimal winning recipe.

After playing the spoiler in Memphis last week, the Owls found themselves falling at East Carolina this week. To make matters worse, Connecticut erased a 10 point lead in Philadelphia to shock Temple with a comeback win. The Owls’ defense may have missed the flight down south as Temple allowed four Pirates to scoring in double figures.

Four Pirates scored in double figures for the first time in AAC play. That in itself is a major accomplishment for a East Carolina team that struggles mightily to get the ball in the basket. East Carolina has the defensive skill to be a .500 team if its offensive production improves even slightly.

Tulane looked like a completely new team this week and the Green Wave would rank higher if not for an already poor record. Tulane came close to throwing the ultimate monkey wrench into SMU’s season before pummeling South Florida in New Orleans. The Green Wave surprised everyone in last season’s AAC tournament and if Tulane shoots like it did in Moody Coliseum this week, the conference should not write this team off completely.

After earning its first conference win last week, South Florida earned the privilege of facing Cincinnati this week. The Bulls defended well, but not well enough to make up for the Bearcats’ explosiveness. Then South Florida was blown out by a Tulane team playing with the most confidence its had all season. The Bulls will head to Tulsa before wrapping up the season with two games in Tampa.