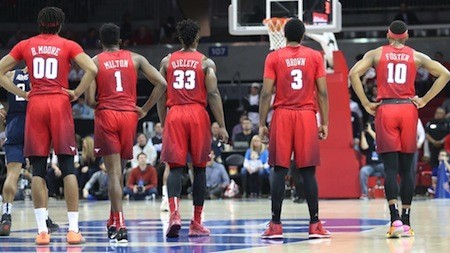 Week 9 of American Athletic Conference play saw SMU earn a statement road win and Cincinnati slip up for only the second time in conference play. The Daily Campus writer Reece Kelley Graham is back with our updated power rankings.

SMU’s road to a share of the AAC regular season conference title hit a roadblock on Saturday in Hartford, one that could have derailed the Mustangs’ hopes of earning a one seed in the conference tournament. Fortunately for SMU, Shake Milton’s six first half three-pointers helped the Mustangs bulldozed right through Connecticut. It was SMU’s first win at the XL Center since the 2015 AAC Tournament finals. The Mustangs’ defense was the star of the afternoon, holding Huskies’ center Amida Brimah to only one point and smothering Connecticut’s guards on the perimeter. Jalen Adams sitting out the second half with an ankle injury may have given SMU an advantage, but also made up for Sterling Brown and Semi Ojeleye’s early foul trouble. Ben Moore was once again the silent hero, finishing with 15 points and nine rebounds. Ojeleye scored from everywhere, showing off the versatility of his offensive weapons. The Mustangs can clinch a share of the regular season championship with one more win.

Cincinnati has been pacing the AAC since conference play began, forcing others, including SMU, to play catch up. Following the Bearcats’ shocking road loss to Central Florida, the shoe is now on the other foot. Cincinnati scored less than 50 points for the first time this season. With the exception of Jacob Evans, no Bearcats’ starters scored more than seven points. Troy Caupain and Gary Clark combined for only six points. Cincinnati’s largest lead in the game was also six, and that came with a little over 12 minutes remaining in the first frame. The Bearcats were within two with seconds remaining, but a missed alley-oop that rattled out prevented overtime, handing Central Florida its first win over a ranked team since knocking off No. 4 Connecticut in 2011.

Houston has won seven of its last eight games, including two wins this week. The Cougars regained sole possession of third place in the AAC after squeaking out in win in Memphis. Damyean Dotson’s hot streak continues, scoring 31 points against the Tigers along with an additional 25 against the Huskies. Cincinnati could determine who places third in the AAC. Both Houston and Connecticut play the Bearcats in the final week of the season.

Most people travel to Orlando and expect to have a good time, but Central Florida’s efficient defense has clouded the sunshine of many AAC teams this season. Cincinnati’s scoring machine stalled against the wrong opponent, and now the Bearcats are just another team on that list. B.J. Taylor, the only Knight to score in double figures, posted a game-high 27 points. Some late missed free throws almost cost Central Florida the game, but a botched dunk allowed the Knights to hang on.

The Tigers saw daylight against Houston this week before the Cougars slammed the door shut in their faces. The high scoring affair allowed Memphis to space the floor and score in transition as planned, but Damyean Dotson and Rob Gray Jr. shredded the Tigers’ defense. Memphis and Tulsa are still one game off the pace for a first round bye in the conference tournament.

Connecticut entered this week having won seven of eight, but then ran up against two teams from Texas both tougher than a $2 steak. The Huskies held a 12 point lead over Houston before the Cougars battled back. SMU took the lead early in the first with a three-point shooting spectacle and never looked back. Connecticut is still playing its best basketball of the season and is on pace to earn a first round bye in the conference tournament. In case anyone needs a reminder, the tournament is being held in Hartford.

Tulsa won twice this week after losing six straight in a stretch that saw the Golden Hurricane facing SMU, Memphis, Houston, Central Florida, and Cincinnati twice. That is probably the toughest stretch an AAC team has had this season. Four of Tulsa’s starters scored in double figures against South Florida, and Junior Etou made up for his eight points against the Bulls with 23 points against East Carolina. The Golden Hurricane finish the season on the road against SMU and Tulane.

Temple’s final homestand did not go as planned. After Connecticut stole one last week, the Owls lost a close game to Central Florida before needing two overtimes to put away Tulane. Shizz Alston’s 25 points helped Temple get the job done against the Green Wave.

Tulane also gave East Carolina trouble this week in a back-and-forth game. Caleb White and Kentrell Barkley finished with 17 points apiece. The pair also did damage against Tulsa, but received almost no help on the offensive end. Lack of production remains a key issue for the Pirates.

Despite two losses, Tulane continues to play with a new confidence that could help the Green Wave make some noise in the conference tournament. Cameron Reynolds is still flying under the radar as one of the most undervalued players in the AAC, having a 43 point week.

South Florida has won only one game in conference play and have gone 1-15 since just before Christmas. Geno Thorpe is doing all he can to replace the production lost when Jahmal McMurray transferred. The Bulls wrap up the season at home against Central Florida and Temple.