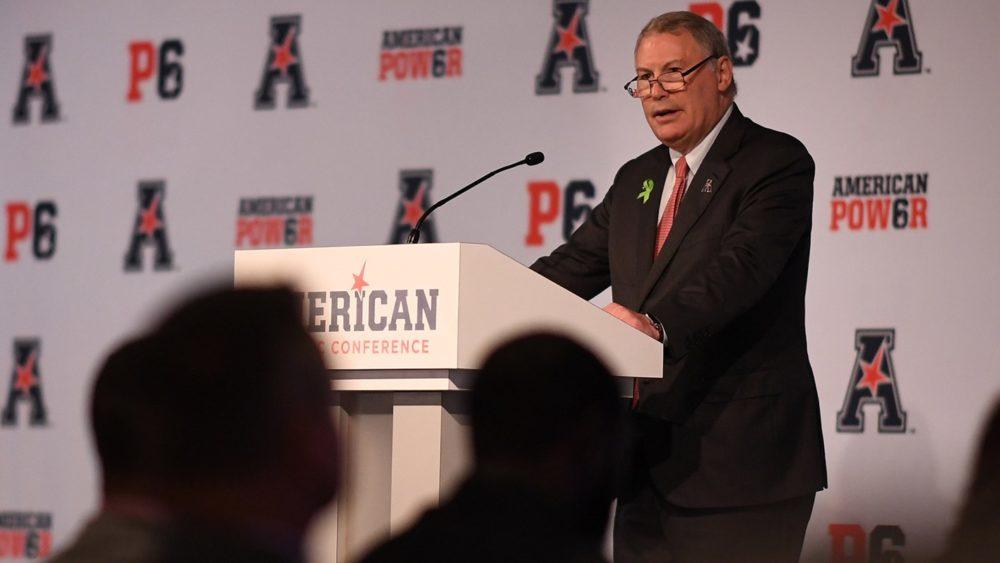 As the American Athletic Conference continues to figure out its increasingly murky future, Commissioner Mike Aresco once again found himself at the center of conference realignment talk this week.

Aresco was sent a letter by Conference USA on Tuesday night that proposed a potential merger of the two conferences and urged Aresco to engage in talks with C-USA about the possibility of reorganization.

Aresco on Wednesday said he was “not interested” in engaging in C-USA’s proposal. He reiterated his belief the AAC will survive the loss of three member schools — Cincinnati, Houston and Central Florida — and become a major conference.

It comes at a time where it appears the AAC — which houses SMU — is losing its footing as the top Group of Five conference.

Aresco spoke about realignment, expansion and the overall direction of the American Athletic Conference at a media availability Wednesday. Here is a breakdown of what he said.

C-USA has been in internal discussions for several weeks about how it could secure its place in the college football realignment landscape.

C-USA finds itself in a difficult position both geographically — with its member schools spread out throughout the country — and financially. One proposal that had become popular was a potential merger with the American to create one larger league that split into an east and west division.

C-USA, as it wrote to Aresco on Tuesday, believed this merger and coinciding realignment could create “rivalry games” that could attract television revenue. Right now, sources have told The Daily Campus, the American understands its television revenue will likely be cut down after it loses marquee schools like Cincinnati, Houston and UCF.

“I think we’ve stated it a few times. We’re not really interested in discussing any kind of merger or conference realignment,” Aresco said.

Aresco said the AAC intends to add member schools to continue to position itself as a “Power Six” conference instead of any merger. A merger, according to many experts, would weaken the AAC’s standing considerably. Before the departure of three teams, the American was seen as the top non-Power Five conference.

However, Aresco is betting that the AAC will add substantial teams to the fold to continue to be the top Group of Five conference. At this point, that may not be possible.

The timeline for expansion

Aresco has made it clear expansion is what the conference is going for.

However, up until now, there have been reports that expansion is not going well for the conference. It was reported by Yahoo Sports! that Boise State, San Diego State, Colorado State and Air Force all decided against coming to the American and elected to stay in the Mountain West.

After that, the Mountain West called itself the top non-Power Five conference, surpassing the American.

“Some of the accounts before were really not accurate in terms of operating. Schools have approached us and sometimes you have discussions with schools and, for whatever reason, things don’t work out. But we haven’t been contacting people who haven’t expressed an interest,” Aresco siad.

Aresco said he suspects the American to add several schools in the “coming weeks to a month.” He declined to comment on which schools they would be.

The University of Alabama Birmingham (UAB) has been discussed as a potential target.

“You really don’t want this to be a long process, we’ve had a lot of time to study it,” Aresco said.

After three of its schools went to the Big 12, things have looked challenging for the American long-term.

After Boise State declined to come to the AAC, there are no obvious schools to add to the conference that would significantly heighten its profile.

“I wouldn’t say that our position is defensive at all,” Aresco said. “I think, you know, you’ve obviously got some schools that are leaving. They have their reasons for leaving. We’ve had an outstanding relationship with those schools. We wish them well.”

Aresco instead pointed to a new model. Instead of bringing in established schools, he believes the conference can survive by bringing in lesser schools and raising their profile once they are in the conference.

“I think what is sometimes overlooked is what the American Athletic Conference has done in elevating programs that may not have been at the level they’re at now,” Aresco said. “In terms of the conference, our goals and vision have not changed. I think once we reconstitute we’re going to continue our approach. As in trying to become an autonomous six conference.”