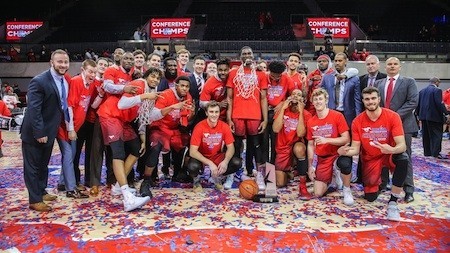 The last time the Mustangs played in the American Athletic Conference Tournament, they won the whole thing.

But that was two years ago. Last season, SMU was prevented from participating due to the postseason ban levied by the NCAA.

Now allowed to play for a championship and playing with only seven scholarship players, one might expect SMU head coach Tim Jankovich to be nervous about trying to win three games in three days. But Jankovich said before practice on Tuesday that he is no more nervous than he has been playing with that number for a majority of the season.

“I think the conference tournament is an incredible challenge for our guys because of our numbers,” Jankovich said.

With so little depth, the Mustangs are not focusing on the big picture right now. Finding postseason success will come by conquering one challenge at a time, one game at a time.

“We have to just try to win the game that’s in front of us,” Jankovich said. “I don’t think we can go into the first game thinking about the third game. I think that would be a mistake.”

These Mustangs look quite different from the team that won the AAC Tournament championship in 2015.

Nic Moore, who won AAC player of the year that season, is gone. So is Markus Kennedy, the tournament MVP.

Ben Moore and Sterling Brown, SMU’s only seniors on scholarship, were just sophomores then. Throw in Ben Emelogu, who had just transferred from Virginia Tech, and senior walk-on Jonathan Wilfong, only four current Mustangs helped earn the program’s first conference title since 1993.

SMU played half of its final two regular season games with only six scholarship players. Emelogu, who injured his ankle in the first half of Thursday’s game against Tulsa, did not play in the second half of Saturday’s game against Memphis, citing pain.

“He’s getting better,” Jankovich said. “We’re optimistic about that. He’ll be great by Friday I hope.” 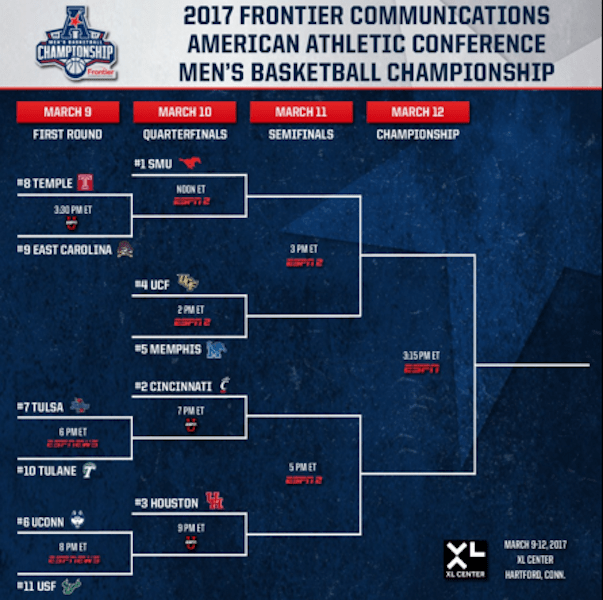 The Mustangs clinched the 1 seed in the tournament on Thursday and reside on the side of the bracket featuring Central Florida (4), Memphis (5), Temple (8) and East Carolina (9). SMU went a combined 7-0 against those teams during the regular season. The Mustangs will play either Temple or East Carolina in the quarterfinals on Friday.

SMU won both of its games against the Pirates by a combined margin of 71 points. The Mustangs also defeated Temple twice, but another matchup against the Owls on a neutral court might prove to be more interesting. Temple took down Florida State and West Virginia, two top 25 RPI teams, on back-to-back nights during non-conference play. Those wins came in an invitational tournament, also on a neutral floor.

“You look outside of the league games, you could easily argue they had the best wins in our league,” Jankovich said. “Temple is a great program and Fran [Dunphy] is a great coach. We have a lot of respect for them, for sure.”

The winner of the quarterfinal will face either Central Florida or Memphis. SMU clobbered Memphis in its season finally 103-62. The Mustangs also earned a five-point win on the road against the Knights in January. SMU played without Jarrey Foster in that game.

Most of the teams that heavily challenged the Mustangs during conference play live on the other side of the bracket. Those teams include Cincinnati (2), the team responsible for SMU’s only conference loss, Houston (3), who led the Mustangs for most of the game in Hofheinz Pavilion, and Connecticut (6), once again playing on its homecourt for the tournament.

“I don’t think there’s anybody we’re hoping that we play,” Jankovich said. “We would just like to try to win the tournament.”

Playing three games in a row might not be the ideal situation, but SMU is dreaming big when it comes to what they could accomplish in March.

“I just think this is a very confident group by nature,” Jankovich said. “Whatever you put in front of them, they’re going to embrace the challenge.”