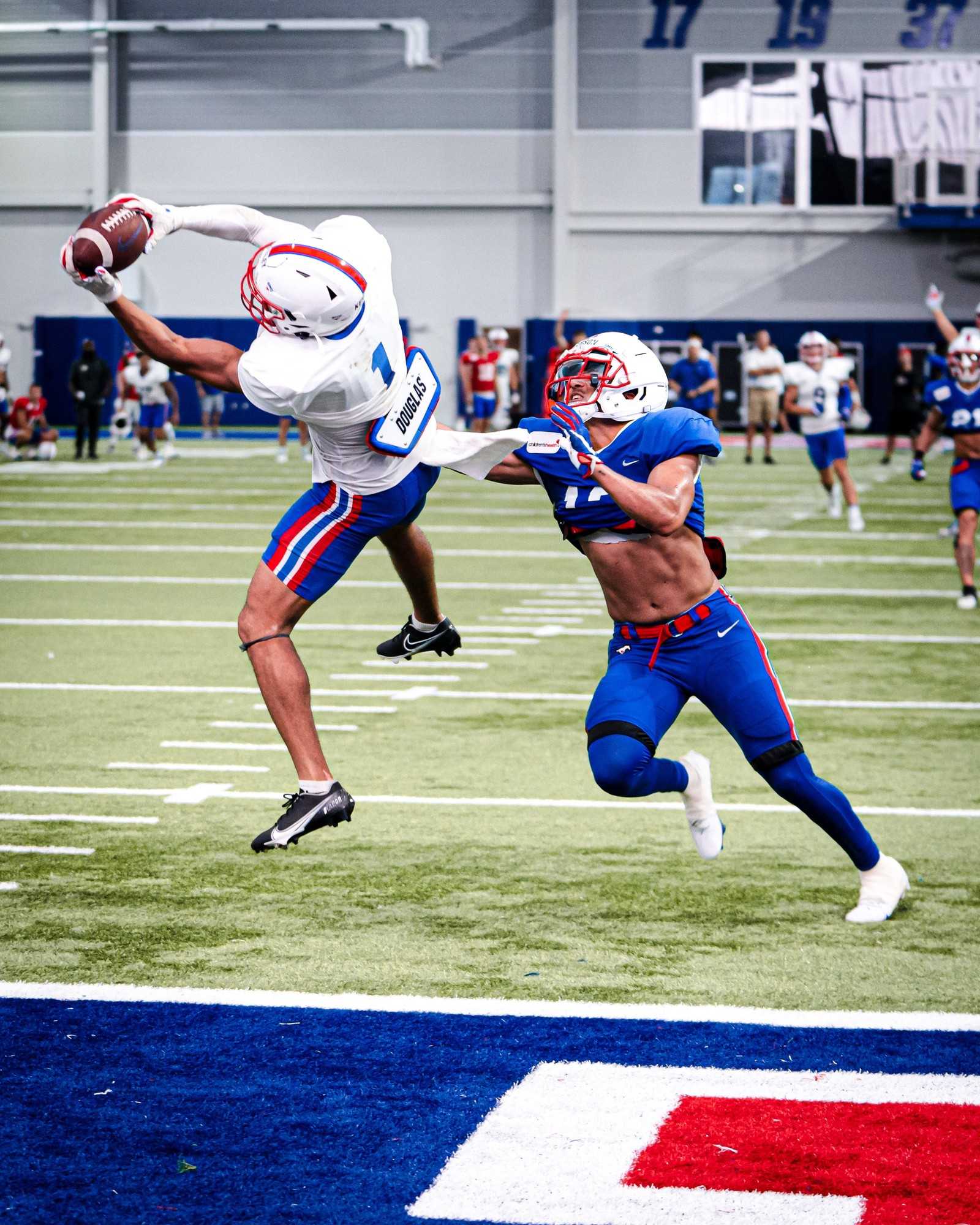 UNIVERSITY PARK, Texas — As Sonny Dykes and his staff went around the room this offseason asking each other the question of what would take to avoid faltering down the stretch of another season, they collectively landed on one answer: Jordan Kerley.

No, not in that way. Not in the way that Kerley was going to be some savior that pushes SMU over the hump and into a conference championship game. It’s more in what he represents.

Kerley is a fluid athlete who catches the ball with ease. He is 6-foot-3 and, according to coaches, can squat with offensive lineman. He’s an Arizona State transfer coming home to play in Dallas.

But, here’s the thing; he isn’t going to start. He might even struggle to find playing time in a crowded wide receiver room.

And that is what he represents: depth. Something SMU hasn’t had in years past. Something that, coaches think, was the reason why of its six losses in the last two years, five have come in the latter months of November and December. It has caused SMU to fall out of a conference championship race late in each of the last two years.

“The competition this year just raises the level,” Kerley said. “I knew coming here would be like that. Going up against guys like Reggie [Roberson Jr.], it makes everyone play well.”

SMU feels as though it added depth like that across the team. Tre Siggers, a UNT transfer, was added to the fold in the running backs room. Grant Calcaterra, a former Oklahoma standout, joined the tight ends. And recently named starting quarterback Tanner Mordecai was just nominated a captain.

On defense, the depth has been a bit harder to see. New defensive coordinator Jim Leavitt thinks there will be more depth, but he also talked of repositioning players to add some reinforcements.

For example, Trevor Denbow will start at safety on Saturday. He had played safety in 2019 and was moved out of the position in 2020 because he underperformed. Denbow going back to the secondary, where he will play alongside true freshman Isaiah Nwokobia, is usually not a sign of depth.

“I [still] think this is the deepest we have been since I have been here,” safeties coach Trey Haverty said. “It’s across the board.”

Of course, none of this can actually be tested until the games begin. It might even take until November and December, when players wear down and depth is tested, to see if SMU will fold like in years past or take the next step.

But for now depth is SMU’s answer to its most glaring problem as a program. In the last two seasons it has held a share, or outright, lead in the American Athletic Conference in October. By November, SMU has fallen out of the race each time.

Dykes believes people like Kerley, who would have almost certainly started immediately in years past, represent a change. He will just wait and see.

“You have to figure out a way to sustain [winning] all the way through [the season]. That’s been something we haven’t been able to do,” Dykes said. “ We have some things that we think that we can do differently to help address that.”

– SMU football announced its program is 98% fully vaccinated against the coronavirus. The American Athletic Conference said teams who are unable to play this season due to COVID-19 breakouts will forfeit the game.

– SMU released its first depth chart with few surprises. However, senior Ar’mani Johnson will not start. Freshman Bryce McMorris beat him out for the job in the secondary.

– SMU will be wearing “LUKE” patches on its helmets to honor 15-year-old Luke Siegel. Siegel died in August after contracting COVID pneumonia. Many sports team across the country had gotten to know Siegel since 2015, when the then 9-year-old had a severe brain injury after a golf cart crash. Siegel publicly battled a prognosis where doctors told him he would never move his limbs or be able to talk again. The New Orleans Saints and Texas Tech both routinely honored Siegel at games in a nod to his story.