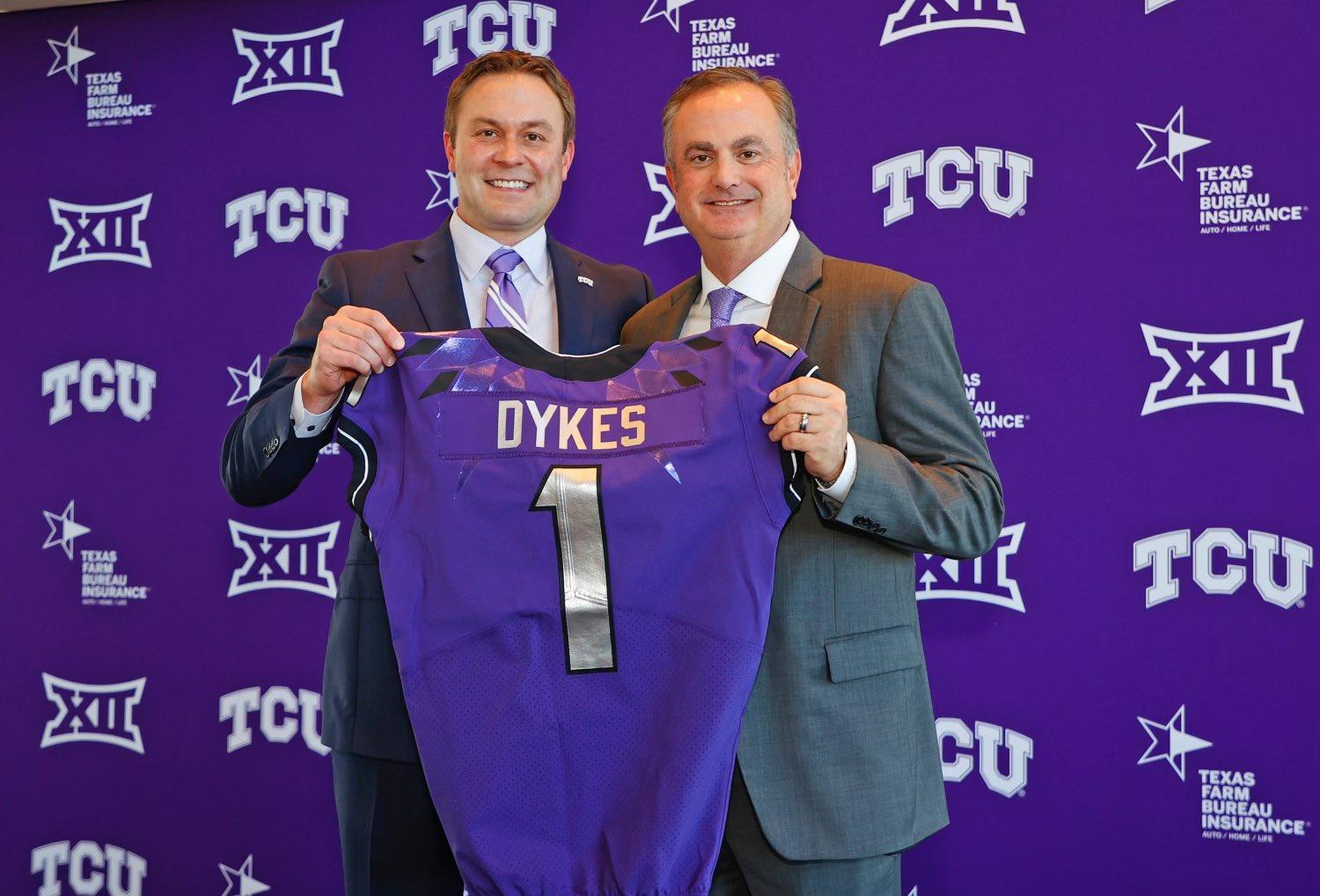 “We knew which direction we were going and got started on it,” Donati said of the process that started with Gary Patterson’s departure and ended with Sonny Dykes.

“We got our guy,” Donati finished.

In a whirlwind coaching search that lasted 30 days, in the midst of a season, and against the backdrop of Dykes’ SMU program rapidly losing games, clarity and coordination are not adjectives that most would use to describe this coaching search.

Yet, the theme from instead Amon G. Carter Stadium, where SMU’s former head coach was officially introduced as TCU’s next coach, was just that. On the part of Dykes and the TCU brass, this was a decision that felt long in the making and with intention on both sides.

“I always knew this place was good from the outside looking in,” Dykes said. “This is a fantastic place, and it took a long process to get here.”

Even as the last month for Dykes has been something of a roller coaster — defined by coaching rumors and a tenuous end to his SMU tenure — both sides talked of visions for TCU that were foundational and structural in nature, unaffected by the last month.

Dykes mentioned the Big 12 as a main factor in his faith in TCU. A Power Five conference, something that SMU could not offer, allowed for more “potential” in Dykes’ view. It was in line with reports over the last month saying Dykes allowed a seven-year contract extension from SMU to go unsigned as the university stayed in the American Athletic Conference.

Dykes went as far as to list the AAC teams by name — Houston, Cincinnati and UCF — that got into the Big 12 this year over SMU.

“TCU’s in the Big 12 conference, a conference that is going to do nothing but get stronger and stronger even with Texas and Oklahoma leaving,” Dykes said.

Donati and Dykes also mentioned another structural tenant — the recruiting base of the Dallas-Fort Worth region, a place where Dykes masterfully recruited at SMU. The former head coach branded SMU as “Dallas’ Team” with a “SMU Triple D” logo inspired by the city. It helped SMU churn out nationally ranked recruiting classes while competing in the AAC.

“I’m not going to lie, I stole that idea from what was already at TCU,” Dykes said, who will take the same strategy 35 miles east of SMU to Fort Worth.

Former TCU running back, and NFL hall of famer, LaDainian Tomlinson, said Dykes’ recruiting exploits in the region were a main reason for his support.

“The fact that he was doing it at a non-Power Five conference level said a lot,” Tomlinson, who helped in the coaching search, said.

And as TCU and Dykes both outlined this clear structure, it was hard to remember that Dykes was just two days removed from his exit from SMU, a departure defined by confusion, hurt players and losses.

For the last month, Dykes was involved in coaching rumors at Texas Tech and TCU. As the rumors swirled, Dykes repeatedly did not address his team about the reports and downplayed their significance.

As the month went on, Dykes’ situation at SMU became more precarious. The team lost four of five games as the program battled “distractions.” It went from No. 19 in the country, and 7-0, to 8-4 and sixth in the AAC.

There were points in the month where Dykes said he was ‘finalizing’ a contract extension with SMU. There were other points where Dykes was evasive about the future.

In the last week, the rumors reached a crescendo with six SMU recruits de-committing nearly simultaneously, sending a clear message about Dykes’ inevitable future. A day before Dykes’ last game on Saturday, the news of his departure to TCU broke while players were on the team bus going to the hotel. Only then did Dykes address the team, but down to the last minute did not say whether he would stay or leave.

“Not too sure I would want to commit to a coach that tells future recruits where he’s going before he tells his current players,” SMU sophomore Will Goldberg wrote on Twitter, one of several players publicly voicing their displeasure over Dykes’ handling of his departure.

But the last month did not seem to matter much in Fort Worth. Donati briefly addressed it, saying he felt “badly” for SMU players who had to deal with the rumors. But he did not say the last several weeks affected Dykes’ candidacy.

“I think it certainly affected their performance. But unfortunately the rumors are going to fly,” Donati said.

That was mostly the theme for the day in Fort Worth. Ignoring the last month, while emphasizing the a vision that Dykes and TCU are sold on.

It was decision that, on the surface, was a whirlwind. But in reality, was far beyond anything the last month could have derailed.