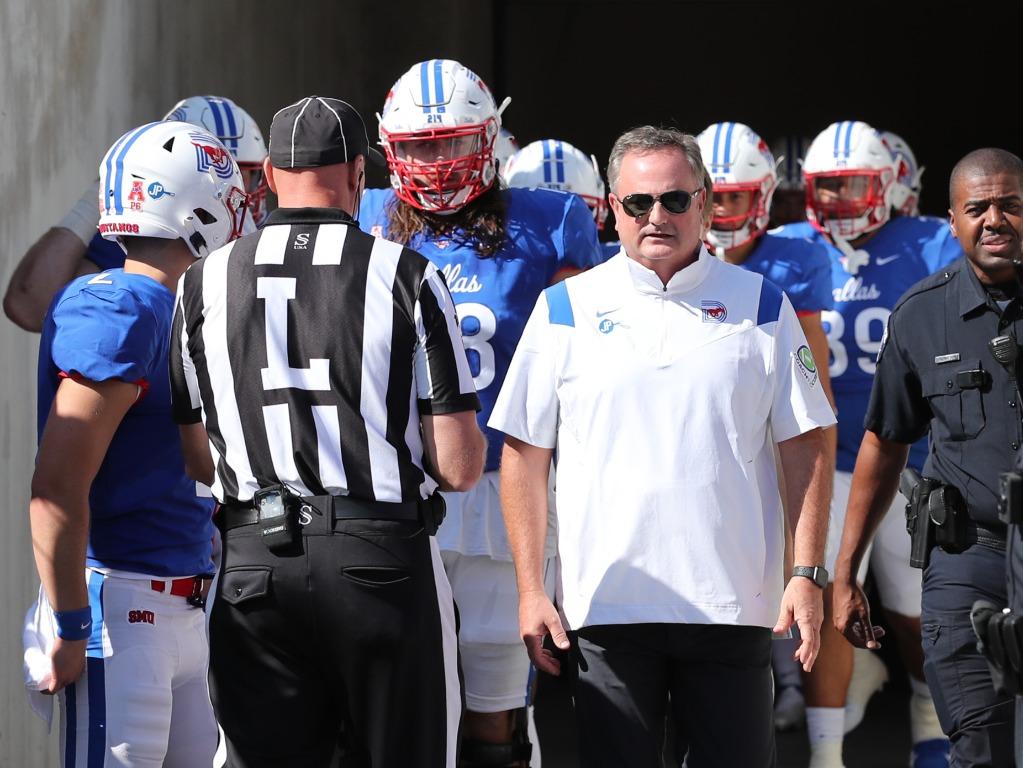 UNIVERSITY PARK — The elephant in the room needed to be addressed.

Or at least that’s the tact SMU took this week ahead of its final regular season game. After a month of Sonny Dykes downplaying the necessity of talking to his team about reports of his departure to TCU, the head coach couldn’t play it off any longer.

SMU had lost three of four games. Its five most prominent recruits had jumped ship in anticipation of his departure. SMU had gone from No. 19 in the country and 7-0, to 8-3 and out of the American Athletic Conference race. It was a program in free fall, starting with a coach who might not stick around.

“He needed to address it. People were starting to get distracted,” Senior Alan Ali said of the coaching rumors. “It is really going off on Twitter right now and the talk in the locker room.”

Dykes finally held a team meeting on Sunday to talk about the TCU job. He did not commit to staying at SMU, but told the group about his desire to coach against Tulsa. And, players at least, are hoping that talk will be enough of a reset button before Saturday.

“I think it was just reassurance,” Senior Delano Robinson said. “It was like, ‘I’m still here for you. Don’t check out. Have faith and continue to work hard so we can win on Saturday.’”

And with that message, SMU will head into its final regular season game trying to stop the bleeding.

The outcome will not stop Dykes from marching to Fort Worth. But at least, SMU hopes, it will be enough to resettle to win one game and stay on pace to win 10 games this season for the second time since The Death Penalty.

“There was enough noise where it became necessary [to talk],” Dykes said. “So I talked to them. That’s what we have to do, you know, as coaches. The good thing is we’re always truthful with each other.”

In weeks past, Dykes maintained SMU’s performance on the field was unimpacted by coaching rumors even after SMU looked lost on the field. After SMU lost to Memphis, Dykes quickly shut down questions about the reports, saying nobody “in that locker room has thought one second about it.”

Yet, players have started to unveil a different reality. One player, fifth-year senior Hayden Howerton, said he was forced to get off Twitter as the coaching rumors swirled. He also said the team’s discourse in the locker room has slowly been consumed by Dykes’ rumors.

“I respect him speaking to us and giving us the rundown of his situation,” Robinson added. “If there was an opportunity he was going to take, not just taking it and just leaving.”

For many of the fifth years on the roster, the situation bears echoes of when former SMU head coach Chad Morris left for Arkansas in 2017.

SMU lost three of its last four games that year and finished 7-6. But unlike in 2017, this year’s decline feels steeper as an undefeated season and conference title aspirations dissolved in a matter of weeks.

“We have been through it as freshmen,” Robinson said. “What you have to understand is it’s just a business. Coaches don’t mean harm. They love the players. Sometimes when a bigger opportunity hits you, you got to do what’s best for you and your family. I understand where [Dykes] is coming from.”

Dykes, on Tuesday morning, liked a Twitter post which discussed addressing the “elephant in the room.” Most of the time, Twitter is innocuous. But here, it was telling. For the first time this season, that elephant has been addressed.

“I thought he addressed it the best way possible,” Ali said. “Everyone is kind of like, ‘Alright, let’s refocus, take it one week at a time.’ At the end of the day you are playing college football. You should love what you do, play hard all the time. There should be no excuse.”