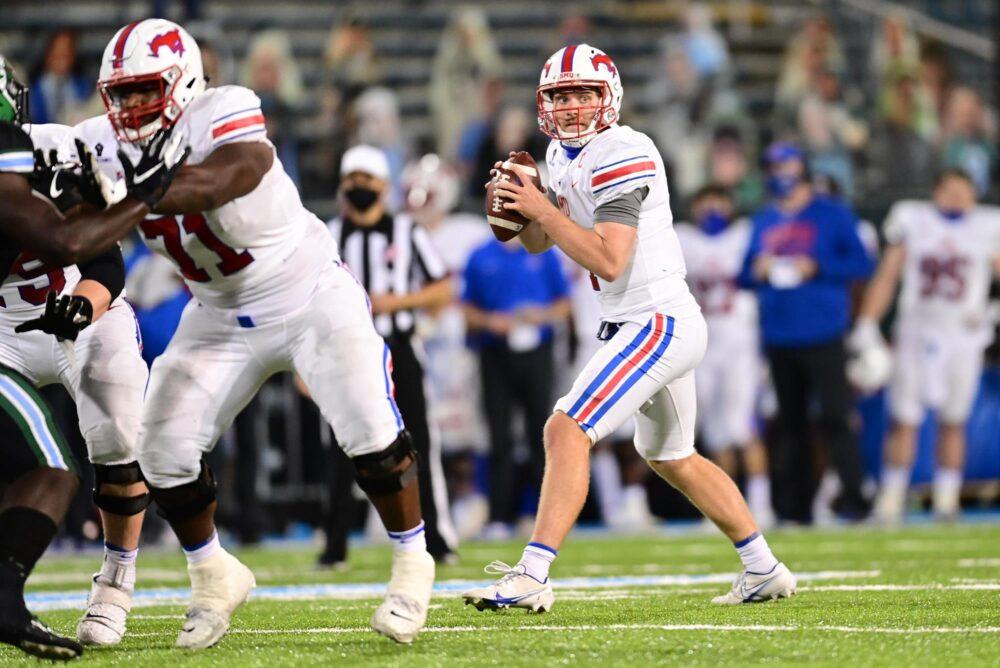 UNIVERSITY PARK, Texas — The lead up to Shane Buechele’s Pro Day for the last three months has been rather conventional.

The former SMU quarterback trained in southern California with Jordan Palmer, a known guru for the position.

He worked out with the likes of former Clemson quarterback Trevor Lawrence and Memphis’ Brady White — the former being the undoubted No. 1 pick in this year’s draft and the latter a finalist for American Athletic Conference player of the year. Both are the prototypical molds for an NFL quarterback.

“I feel like I’m right up there with them,” Buechele said on Thursday.

He even hired a speed coach to help his form for the 40-yard dash, something he jokes made him relearn how to run.

But despite the striking normalcy heading into his NFL showcase, Buechele is nothing like the players he trained with or the schedule he adopted.

Buechele is an NFL draft process enigma of sorts.

He is a multi-year starter at Texas and SMU, but has never held the same offensive coordinator for more than a year. He is accurate, but there are questions over his arm strength. He isn’t undersized — Sonny Dykes was sure to mention he checked in at over six-feet today — but also isn’t the 6-foot-4 behemoth of a Lawrence.

In short, it’s complicated. Add in a pandemic-riddled season last year, and the evaluation process for Buechele becomes even murkier.

His Pro Day performance was supposed to ease those dichotomies. But nearly every scout acknowledges no amount of work on Thursday would truly solve what is one of the more intriguing prospects of the NFL Draft. Notably, all 32 NFL teams showed up at SMU to watch Pro Day.

Buechele is a rarity in college sports. He is a well-known name not in a Power Five Conference with a backstory that is universally known.

He was a true-freshman at Texas when he won over the starting job. Then, when Sam Ehlinger came in, he became a backup and transferred to SMU.

Many parts of that story are traditionally good for an NFL quarterback. He has over four years of film and has been successful each spot. He never posted a quarterback rating of under 125 and nearly tallied three 3,000-yard seasons.

“I think scouts can see a player who has grown every year,” Dykes said. “He’s been productive, no matter what the system has been. He has shown that he can play that position at a very high level, regardless of the supporting cast.”

Insert all of the questions surrounding Buechele.

At just over six feet tall, he is the middle road for a quarterback in the NFL in terms of height. Usually NFL teams that tend to pick smaller quarterbacks like to compensate for the deficiency with athleticism or running ability. Buechele does not check those boxes.

Moreover, he is accurate but without a strong arm. The storylines of Buechele’s arm tiring as the season went along plagued him in two years as SMU faltered down the stretch of both of his seasons.

Buechele tried to show improvement in some of those areas on Thursday. He emphasized throwing on the run to NFL scouts. He thought he ran fast enough to show that while he might not be a Jackson, he can still move around in the pocket.

“I thought we showcased that,” Buechele said.

Either way, he thinks he deserves to be an NFL quarterback. Dykes thinks he can be too. It will just be a matter of fit.

That might be the most conventional part about him. As Dykes said, regardless of the prospect, fit in the NFL is everything.

“My ability to drive the ball down the field, my knowledge of the game, and just being a locker room guy,” Buechele said of his strengths. “Obviously it’s up to the GMs and the coaches for who they draft, but I believe I’m up there with the best of them.”