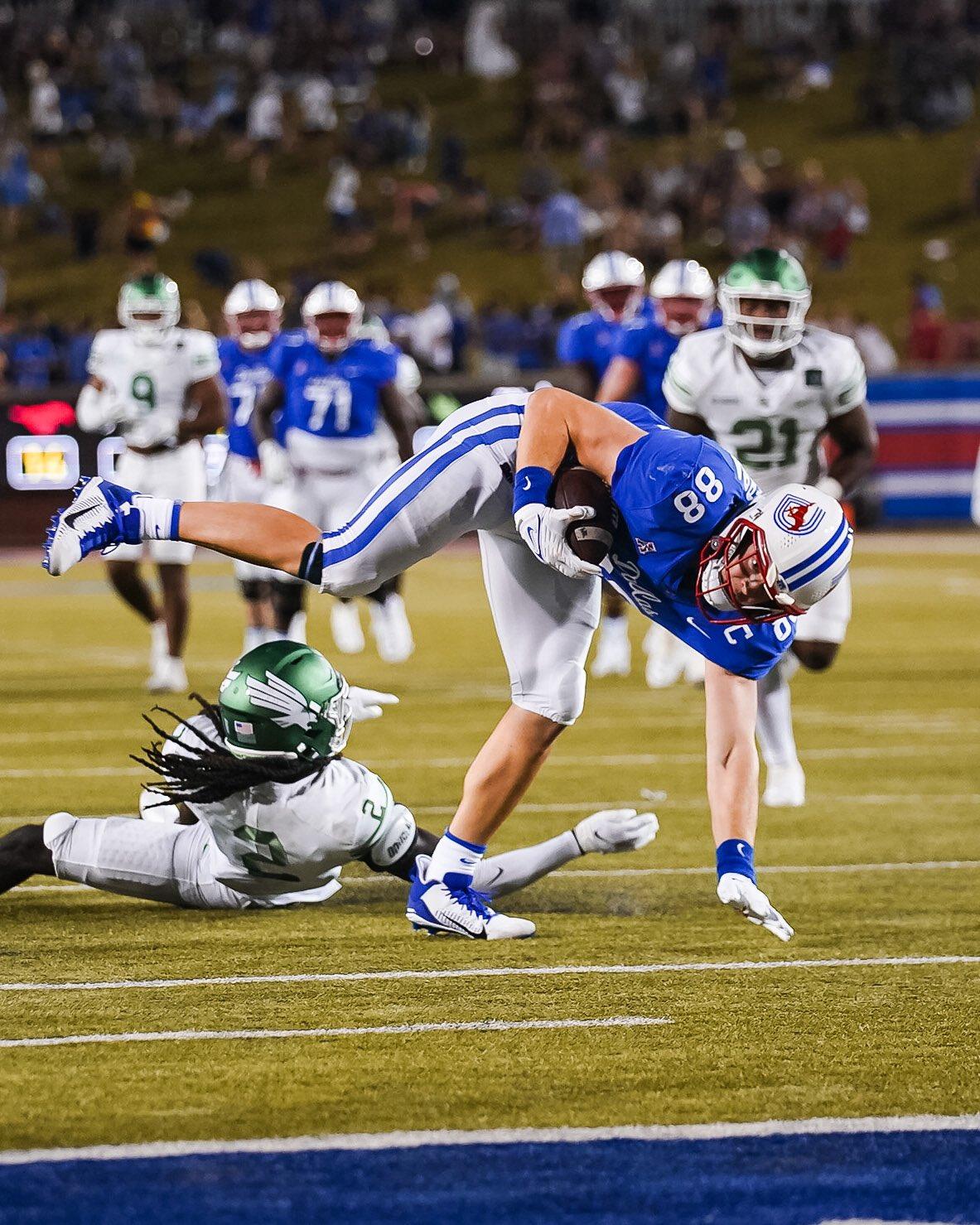 UNIVERSITY PARK, Texas — Let’s begin by establishing what this game was supposed to be for SMU.

It was supposed to be about a resounding win over a crosstown rival, North Texas, a club which SMU referred to all week as “that team from Denton.”

It was supposed to be about SMU flexing its recent exploits in recruiting Dallas, with the Mustangs intentionally donning their “Dallas” uniforms against a local foe.

And it was all supposed to happen against the backdrop of a week in which SMU was left out of the realignment shuffling with the Big 12. Three American Athletic Conference teams made the jump to a Power Five conference — with Big 12 commissioner Bob Bowlsby saying they were the “three best” football schools — and SMU wasn’t one of them.

But instead of showing any of that, SMU put forth a lukewarm performance, a 35-12 win over a middling Conference USA team. There was no statement to the Big 12. There was no resounding message to recruits that SMU was the preeminent team in the area.

“We all realize we certainly haven’t arrived by any stretch. I think that is pretty clear by tonight,” SMU head coach Sonny Dykes said. “We did some things that were pretty uncharacteristic of us. We were very fortunate to win.”

That would be a pretty accurate assessment of what happened on Saturday. SMU, for the first time all year, trailed for almost 26 minutes. It dropped passes, including a would-be touchdown by Danny Gray. It turned the ball over four times.

If it wasn’t for a Tanner Mordecai 29-yard touchdown pass to Grant Calcaterra late in the third quarter that gave SMU a lasting two-possession lead, where the tight end broke one tackle and stumbled into the end zone, SMU may have slogged through the fourth quarter in a tighter game.

A fourth-quarter interception by Chace Cromartie in the end zone, with the score 21-12, also helped to wipe away any lingering UNT hopes had driving with a chance to make it a one-possession game late.

It was indicative of SMU’s defense leading the way while the offense stumbled upon itself.

“I told the team in the locker room just now.. defensively, they won the game for us,” Dykes said.

It wasn’t as though UNT played particularly well. Until the third quarter, North Texas was 0-for-10 on third down conversions. Jace Ruder, although he threw for 366 yards, had two interceptions that led to SMU points.

Two times in the first half, UNT had the ball on goal-to-go situations and both times it settled for field goals. It ensured that UNT’s lead never got beyond 6-0 instead of extending it to two possessions.

For a long time, though, SMU couldn’t capitalize. Big plays helped it stay in the game.

But if SMU was looking for separation, that didn’t come until much later. After the Calcaterra touchdown that put it up two possessions, Ulysses Bentley IV finished off the night with an 85-yard touchdown that brought the score to its final form of 35-12.

“I would like to see our offense play at the level our defense did tonight. We would probably feel different right now [if they did],” Dykes said. “We were able to win and win by a bigger margin than we probably should have won by.

“I think we all realize that we have some momentum in our program and we all realize we haven’t arrived. As far as auditioning for [the Big 12 or another conference], you know how it is. They are going to look at the final [record]. All we can do is all we can do. That’s just keep playing hard and keep giving ourselves a chance to win football games.”

Ultimately, this game will not have final say over SMU’s realignment future. It is, however, SMU’s first public appearance just days from being spurned by bigger conferences.

The Big 12 essentially ignored SMU, for reasons that are bigger than one game.

But, at least tonight, SMU gave it no reason to reconsider.