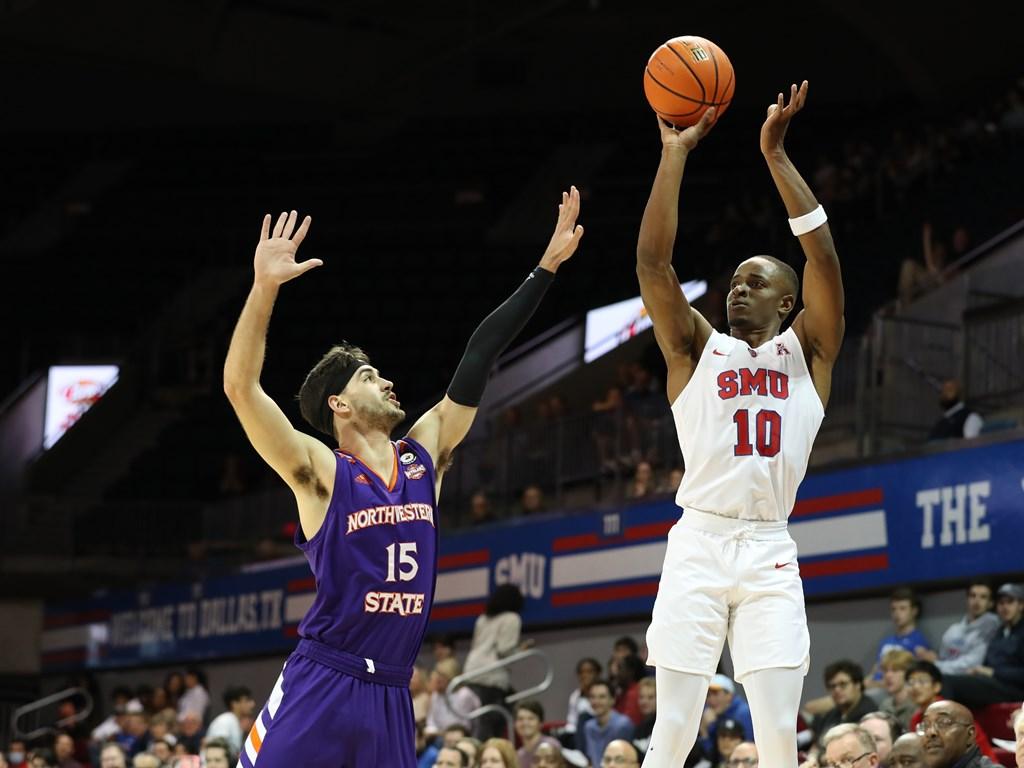 UNIVERSITY PARK, Texas — This win against Northwestern State certainly isn’t a surprise win, but it is a statement piece – reminding the rest of the American Athletic Conference that this SMU team is one that bounces back, and bounces back quickly too.

After a poor shooting night at Oregon, 37.7% from the field, SMU bounced back tonight with an impressive 52.2% shooting percentage from the field and 39.3% from downtown. SMU ended the game with 95 points to NSU’s 48, winning its second game of the conference.

Beginning the game with a 16-0 run largely helped in this 47-point rout, and since it took NorthWestern about 13 minutes to score a point. Speaking on his team’s ability to hold teams to low shooting percentages, SMU head coach Tim Jankovich says,“anything in the thirties, that usually wins most games,…..anything else is not good enough”. SMU held Northwestern State to 38.2% shooting on the night.

This 47-point win is SMU’s largest since 2015, when it defeated New Hampshire 98-44. This is also the ninth-largest win margin in the team’s history. SMU also outrebounded Northwestern State 55-25, the team’s largest rebound margin since Nicholls in 2015, where they outrebounded the opposition by 37 rebounds. This is probably owed to the big-man presence in this team, something Jankovich says the team hasn’t had in six to seven years.

Duquesne transfer forward Marcus Weathers was prolific throughout the game tonight, showing incredible athleticism, versatility and scoring ability. Shooting 66.7% from the field, the two-time All-Atlantic 10 honoree showed why the team went through much trouble to bring him to Dallas, dropping 22 points and 11 rebounds for a double double, alongside five assists, two steals and a block. This is the nineteenth time Weathers has scored 20 points or more in his career.

Senior Kenric Davis finished not too far behind with his own 19 points and 10 assist double double, and was only one rebound away from a triple-double. Canadian guard Emmanuel Bandoumel posted another 14 point game, following up from one against Oregon on Sunday. He played 25 minutes, shooting 35.7% from the field.

After the McNeese game, Jankovich admitted that team selection is something that he had found trouble with, saying, “It is a difficult thing for me because by now (when you count summer and the rest of the time after) there is usually pretty good separation between who is going to play the most and who’s not really in the mix,……and I want to make sure that we’re being fair to everybody. I think it’s probably going to take us a couple months to really know our real rotation, conference time maybe”. But after tonight, it seemed like Coach Jankovich has began finalizing the names on his team sheet as four individual players (Nutall, Davis, Bandoumel, and Weathers) played over 20 minutes each for SMU tonight.

SMU is now 2-1, and continues their American Athletic Conference campaign on Thursday against SouthEastern Louisiana at Moody Coliseum in Dallas.