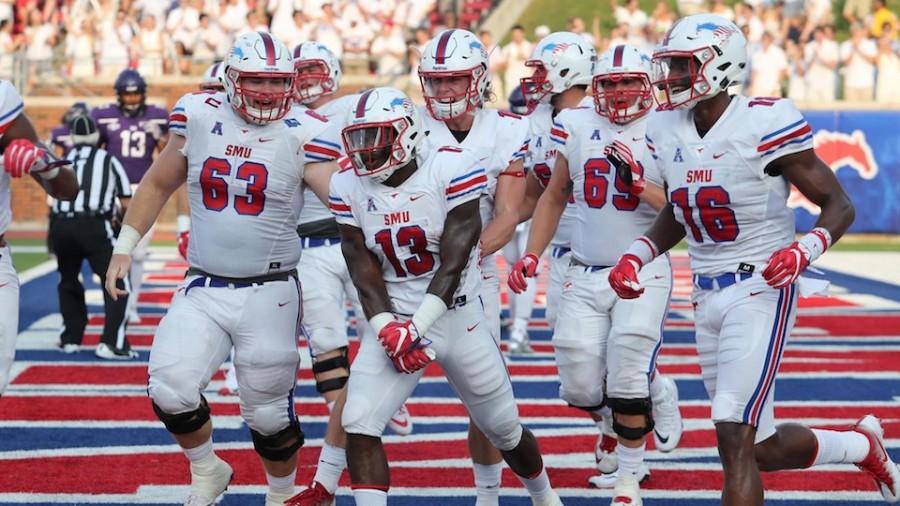 The Daily Campus collaborated with the sports desk of the North Texas Daily to get an inside scoop on the upcoming game between the Mustangs and the Mean Green at Ford Stadium on Saturday at 6 p.m.

1) How has UNT grown from the team SMU beat last year?

“Last year there were so many question marks surrounding this team. Alec Morris had never started a game at quarterback and Mason Fine was a largely unknown commodity as a small, true freshman quarterback. Fast forward to this year and Fine has a lot of experience under his belt and has shown a lot of improvement. The secondary is strong and there is some playmaking ability in the receiving corps. Year two in the system after a bowl appearance has the team buying into what Seth Littrell is selling.” – Brady Keane, Sports Editor of the North Texas Daily

“Nearly every unit for North Texas has improved from last year. The only exception is the linebackers for the Mean Green. Besides that, the offensive line is much improved and the quarterback, running back, D-line and secondary are all experienced and another year along physically and mentally.” – Matt Brune, Senior Sports Writer for the North Texas Daily

2) What is key for UNT in slowing down SMU’s offense?

“The Mean Green are going to have to slow down the running game. Let’s be honest – Courtland Sutton is going to get his. If the Mean Green go slow down the trio of Xavier Jones, Ke’Mon Freeman and Braeden West, they’ll be in a much better position to compete against SMU this season.” – Brady Keane

“The secondary will be the most versatile and useful weapon in slowing down the SMU offense with preseason all conference team members Kishawn McClain and Nate Brooks. However, the key for North Texas’ defense will be the defensive line getting pressure on redshirt sophomore Ben Hicks throughout the game.” – Matt Brune

3) How does UNT expect to split up carries between their 3 running backs?

“Unless something happens to Jeffery Wilson between now and then, he’s getting a dominant share of the carries Saturday. Nic Smith and Evan Johnson played well in the opener against Lamar, but they are young complimentary pieces. Wilson’s 176-yards rank 10th among FBS running backs who have played one game this season, so he’s clearly one of the top backs in the country. Like Sutton for SMU, Wilson will get his yardage.” – Brady Keane

“The primary back for North Texas is senior Jeffery Wilson, he’s their engine and the head of everything they want to do offensively. Freshman Nic Smith is a capable receiver and versatile back and senior Andrew Tucker is more of a power back, but Wilson will need to have another monster game for North Texas to have a shot.” – Matt Brune

4) What is UNT’s biggest weakness?

“The offensive line is likely still the biggest weakness, even though the unit looked good against Lamar. It’s hard to predict what a unit with so many new faces will do when they take a step forward in competition. The group looked good last week, but there is still a lot to prove.” – Brady Keane

“The Mean Green’s biggest weakness is keeping quarterback Mason Fine upright. Last week against Lamar, the Cardinals brought tons of zero blitzes and unblockable pressure and hit Fine, a lot. While this isn’t really the O-line’s fault, they’ll need to account for all the rushers and give Fine some time on Saturday.”- Matt Brune

“I’m sure I’m expected to pick North Texas here, and I wish it didn’t make me come off as a homer. But the Mean Green are going to win this game in a close one. I don’t think the SMU defense can stop Jeffery Wilson, so look for Wilson to pave the way in a 35-31 win.” – Brady Keane

“Both teams are coming off of walk-in-the-park wins, so we don’t have too much to go off of from either side. North Texas will control the clock and run the ball effectively, while SMU will have success in the air to Courtland Sutton and company. Both teams will have chances to win; SMU will ultimately prevail 31-27.” – Matt Brune