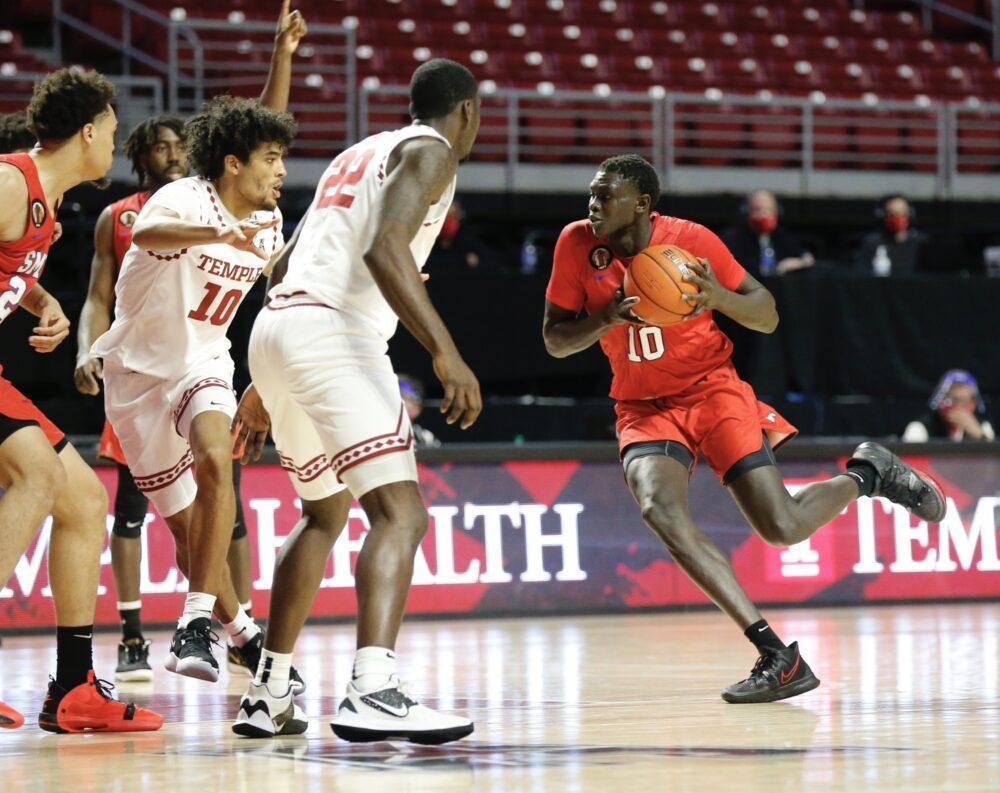 A balanced scoring effort buoyed by recent transfers Darius McNeill and Yor Anei pushed the Mustangs over Temple in its conference road opener on Wednesday afternoon, 79-71.

This marks the first conference road win for SMU after losing its last six matchups away from home to end last season.

After trailing by six points early on, SMU jumped out to an 11-point lead in the first half behind the shooting of McNeill and Emmanuel Bandoumel. Temple would prevent the Mustangs from blowing the game open, however, by holding the Mustangs scoreless for a four-minute stretch and closing the deficit to five points by halftime.

Temple came out aggressively to start the second half and made SMU sweat down the stretch. Late buckets from McNeill and Kendric Davis along with a grueling defensive effort would be enough for the Mustangs to ultimately pull away and win at Temple for the first time since 2017.

“It’s always a tough trip coming up here to say the least,” head coach Tim Jankovich said. “At the right time, we picked the defense up and finished the game off.”

McNeill, who transferred to SMU last season for California, poured in a season-high 17 points on 6-of-10 shooting including three three-pointers. His defense on the perimeter was also key as he helped SMU hold Temple to just 9-of-31 shooting from deep.

“He seems like he just gets better and better,” Jankovich said. “He is very confident and does a lot of good things. The newcomers came up big for us.”

Anei, who has finally been able to play after awaiting a transfer waiver and recovering from a wrist injury, made his presence felt on the interior with 14 points and five blocks, including four in the first half. His five blocks are tied for the most by a SMU player in an American Athletic Conference game.

“[Yor] is elite,” Jankovich said. “There’s good shot blockers, and there’s elite shot blockers. When you have a guy like that, he makes up for mistakes. He’s just a fantastic addition to the program.”

Brendan Berry led Temple in scoring off the bench with 17 points while knocking down five three-pointers. Damian Dunn scored 15 points but fouled out down the stretch while Jake Forrester had seven points and 12 rebounds on the afternoon.

Despite a solid defensive effort, SMU was outrebounded for the second time this season. Both instances have occurred on the road in the two closest games the team has played so far.

“I thought our rebounding was awful,” Jankovich said. “That’s what kept the game close with their effort on the offensive boards. I’m really disappointed in that, but thankfully, our defensive numbers were good.”

SMU improves to 6-0 on the year and 2-0 in conference play. It must now get ready for their toughest challenge of the season thus far as they host fifth-ranked Houston at Moody Coliseum on Sunday at 6 p.m.

“They are terrific,” Jankovich said. “The bad news is that they’re the best offensive rebounding team in America. We just had a really, really poor defensive rebounding night, so that’s obviously a big concern, but it’ll be good to get back home.”