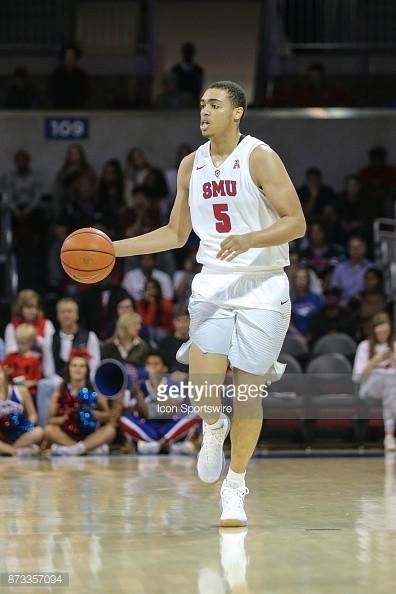 In the second half of Sunday’s 83-65 SMU victory over Louisiana-Monroe at Moody Coliseum Nov. 12, the Mustangs were having a hard time. SMU had kept ULM in the game with sloppy play and a plethora of turnovers. The situation looked similar to SMU’s win over Maryland-Baltimore County.

Then the Mustangs found their spark. With less than 13 minutes remaining in the game and SMU up three points, Jimmy Whitt drove the lane and kicked out to a wide-open Shake Milton in the corner. Milton made the 3-point shot, and the crowd erupted. The shot keyed an 18-4 Mustang run that effectively put ULM away.

“Plays like that at home, those are the type of plays you want,” Whitt said. “They’re going to ignite the crowd and ignite the team.”

Ben Emelogu and Whitt picked up two fouls in the first half for the second-straight game, causing head coach Tim Jankovich to bench them for long stretches. With two of its starters out, SMU turned to Jarrey Foster and Milton to pick up the slack. Milton played all 20 minutes of the first half for the second time this season. Because of the foul trouble, SMU went into the dressing room leading only 35-31. In the locker room, Jankovich had a clear message for his players.

“We can’t shoot ourselves in the foot 11 times,” Jankovich said. “We have to get shots on goal, and when you’re turning the ball over 11 times, you’re limiting your shots.”

Freshman Ethan Chargois was crucial in the second half. Two days after an impressive performance in SMU’s opener, Chargois finished with 23 points and nine rebounds. His performance earned him a standing ovation from the home crowd as he was subbed out in the final minutes. Chargois proved that SMU can count on him.

Milton finished the game with a team-high 24 points in 39 minutes of play. Foster added 15 points and six rebounds. Whitt led the team with seven assists.

The Mustangs move to 2-0 on the season and improve their home winning streak to 24 games, the third-longest active streak in the NCAA. SMU returns to Moody Wednesday against Northwestern State. Tipoff is set for 7 p.m.