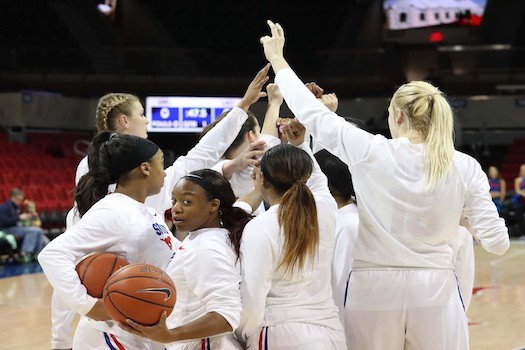 After losing to Tulsa 66-59 on the road last week, the Mustangs redeemed themselves this week against Memphis on Tuesday night. Their recent win will improve their season 12-10 and their conference 3-6.

For the past 25 seasons, the Mustangs were lead by head coach Rhonda Rompola. Following her recent retirement, SMU has a new face on the sidelines. After working 12 seasons as a collegiate assistant for 3 Hall of Fame coaches, Travis Mays is in the middle of his debut season as head coach of the Mustangs.

After a couple of crucial Mustang penalties, the Tigers regained momentum and earned a substantial lead. The Tigers went into halftime with a 23-18 lead over the Mustangs.

At the start of the second half, the Mustangs kept up with the Tigers consistently. A free throw by sophomore forward Dai’ja Thomas trimmed the 5-point deficit from halftime to a 2-point margin to close out the third quarter.

The fourth quarter consisted of close scores and critical turnovers. With 2:53 left in the fourth quarter, Bolton shot her fifth triple of the night, raising the Mustangs’ lead 50-44. Bolton, burdened with fouls, only had 3 points in the first half, but her impressive triples in the second half were imperative for the Mustangs.

SMU will host conference rival UCF on Saturday, February 2nd at 2 p.m. at Moody Coliseum before hitting the road for the following two games. SMU will be back in Moody Coliseum on February 18th, for a second chance against Tulsa at 2 p.m.