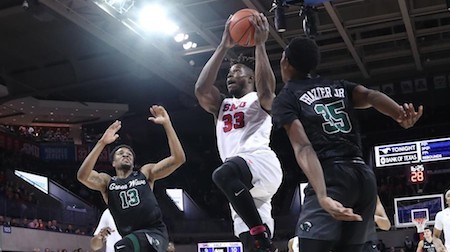 SMU Basketball’s breakout star from the 2016-2017 season has decided to enter the upcoming NBA Draft.

Junior Semi Ojeleye, who helped lead the Mustangs to a conference championship and NCAA Tournament birth, will evaluate his professional options in the coming weeks. Ojeleye’s decision has not been formally announced, but has been confirmed by zagsblog.com’s Adam Zagoria, CBS Sports’ Jon Rothstein, and The Daily Campus.

SMU junior Semi Ojeleye confirms by text he will test the NBA Draft waters w/o an agent.

Ojeleye will enter the draft, but has not signed with an agent, leaving the door open for a return to SMU if he so chooses. He is on track to graduate this year, but still has one full season of NCAA eligibility remaining.

I can confirm #SMU F Semi Ojeleye will declare for the NBA draft but not hire an agent. @AdamZagoria 1st on this.

Ojeleye must decide on his return to school by May 24.

BREAKING: @SMUBasketball's Semi Ojeleye will enter the NBA Draft, will not hire an agent. May return to school if he chooses. #SMU https://t.co/JS257Kcr9m

The 6’7 forward is currently projected to be drafted in the second round, but could raise his stock for next year’s draft if he returns to SMU. In DraftExpress.com’s latest mock draft, Ojeleye is taken 28th overall by the Los Angeles Lakers.

In his first season with the Mustangs, Ojeleye averaged 18.9 points per game and 6.8 rebounds per game. He was voted American Athletic Conference Player of the Year and named to the All-Conference First Team.