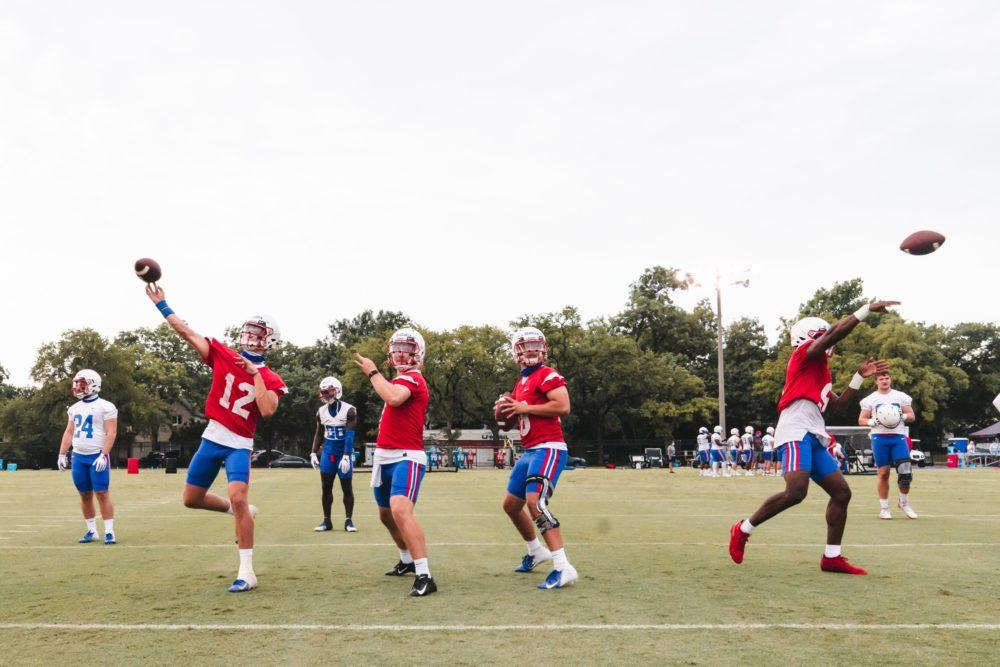 Some called it a family reunion. Others, often in the same breath, elected to describe SMU athletics’ return to campus as challenging, crazy and sometimes uncomfortable.

Regardless of how people inside SMU’s practices have characterized the last six weeks of limited workouts, liability waivers and testing; there was one characteristic that was universally employed to depict the new reality: surreal.

That shouldn’t come as a shock, it seems to be a versatile descriptor these days as teams play amid a pandemic.

It was surreal when, on March 11, SMU’s men’s basketball team sat inside a Marriott Hotel in Fort Worth preparing for a conference tournament when they all got a text saying the season was over.

It was also surreal when athletes were asked to pack up their dorms and leave, some not knowing if they would ever be back. Some also were rushed out so quickly there was not even time for them to clean out their belongings.

“It was one of the most surreal days when they shut it down in Fort Worth that I have ever been through in basketball,” SMU head basketball coach Tim Jankovich said.

“It was something you can lean back and tell 30 years from now. Just like, ‘Hey, we were told just midway before starting a game,’” SMU junior forward Feron Hunt added.

And as each day passes, now nearly five months removed from the opening shutdown, that state of shock doesn’t seem to be wearing off.

Jankovich tells stories of signing transfer players without ever meeting them in person or seeing them play live. It is the latest twist of recruiting during the pandemic. Yor Anei, the Oklahoma State transfer who signed with SMU this July, stepped on campus for the first time the day he moved in. That is something, after almost three decades in college basketball, Jankovich has never done.

It is also the case, as many coaches are finding out, that life inside of SMU’s summer workouts is largely dictated by things that happened months prior and miles away.

Teams are dealing with the reality that as SMU locked its doors after spring recess, student-athletes went home to vastly different situations. Some had access to a gym, others had entirely different priorities on the mind.

“I would go to the track and run with my mom, sister and my dad,” SMU women’s basketball player Reagan Bradley said. “… Actually, it is [the longest time I have gone without playing basketball].”

That has meant the more nuts and bolts aspect of what the actual workouts look like have become a challenge. Both Jankovich and women’s basketball coach Travis Mays have all but eliminated live basketball at their workouts for fear of players getting injured. SMU football, with its season still slated for September, is also grappling with that to a large degree.

The first wave of players arrived at SMU on June 15. Practices did not begin days, and in some cases longer, after everyone was moved in.

“It has been challenging for all of us. Our strength and conditioning staff, led by Kaz Kazadi, has done an outstanding job of changing and adapting. We have a really good plan that we are very comfortable with when it comes to bringing our guys back slowly,” Sonny Dykes said, SMU’s head football coach.

The element that is planned for the most, however, is the one thing the least in coaches’ control: the pandemic. Athlete safety against COVID-19, as far as contact tracing and getting approval for certain practices, has been the most complex obstacle.

Teams and coaches are planning things out week-by-week, sometimes day-by-day, because of the uncertainty. Strength coaches like Kazadi, who primarily works with the football team, and Caleb Withrow, who works with basketball, have been in daily meetings with coaches.

Even with that, there have been setbacks. SMU women’s basketball, according to Mays and Bradley, both acknowledged an unspecified early setback.

It is publicly known that senior Johnasia Cash, a center on the women’s team, did not return to campus over fear of the safety measures at SMU and because of the liability waiver athletes were asked to sign prior to onboarding. She questioned the intentions of SMU’s staff. A week later, she entered the transfer portal and now is enrolled at Penn State.

Neither Mays nor Bradley addressed that directly, but it has been a major storyline for the program in the passing weeks.

“We had a couple of setbacks. When you have a setback, you have to almost start over… It is not comfortable not knowing what is going to be coming up in the next week, two weeks or even a month,” Mays said.

There have been athletes who have tested positive, nine in total were confirmed before SMU changed the way it reports positive cases. Rick Hart announced last week, however, that all 70 surveillance tests of athletes came back negative.

Still, there is no way, as Jankovich acknowledged, to completely mitigate the virus’ potency. The evolving plans this summer reflect that.

“I don’t want to risk any contact tracing right now. We are not doing anything to where a guy would get contact traced and have to go into quarantine,” Jankovich said.

Contact tracing, at least in the summer months prior to any season, has appeared to be one of the most daunting hinderance to playing sports. Michigan State and Rutgers football, two of 16 college teams already, have had to shutdown summer workouts and go into quarantine because a positive COVID test had spread.

NCAA President Mark Emmert said he feels contact tracing, and having large swaths of teams quarantined, could make a college sports season all but impossible if the virus continues to rage in parts of the country.

“If there is to be college sports in the fall, we need to get a much better handle on the pandemic,” Emmert said two weeks ago.

SMU knows this better than anyone. Located in a city that has recently had 18 consecutive days of 1,000 or more positive cases, the virus is very real threat for everyone in the Mustangs’ backyard.

For now, though, Rick Hart maintains the SMU will look to play a fall football season on time and in full. He added that the feeling he gets from student-athletes on campus is one of positivity. Some of the lighthearted stories out of SMU summer workouts, like quarterback Shane Buechele growing a quarantine beard, would support that assertion.

But, right now, there is no doubt that SMU summer workouts remain a fluid situation. Everything is right now. Perhaps the man with the newly grown facial hair says it best about life at the Lloyd Center.

“Whatever is going to happen, we really don’t know,” Buechele said.