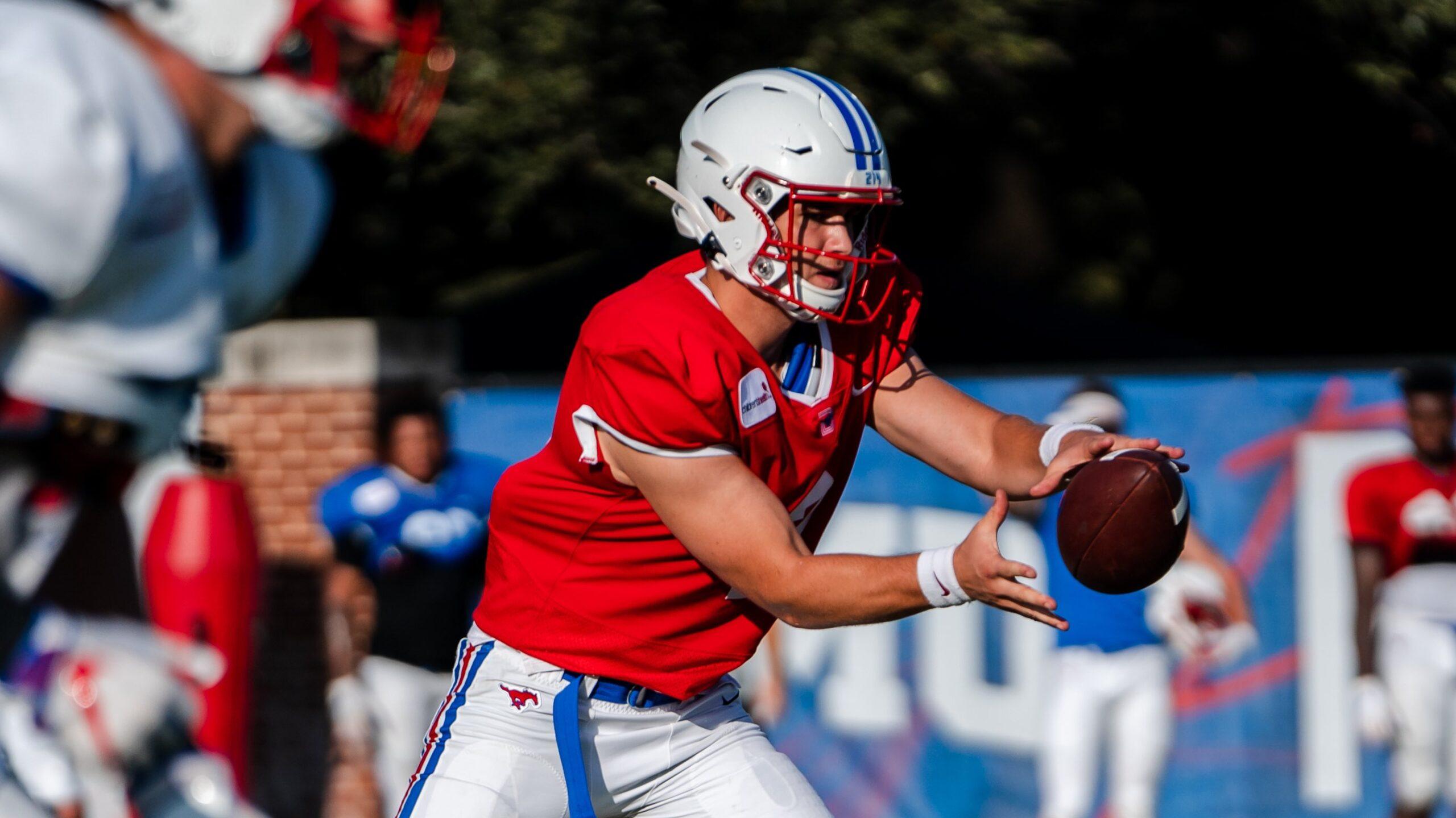 Seven touchdowns. School record. 56-9 win. That just about wraps it up.

My take? So what.

The most interesting part of Saturday’s drum beating of Abilene Christian — a program who hasn’t seen a winning season in the lowly Western Athletic Conference since 2018 — had nothing to do with Mordecai.

Even he would tell you that. We knew long before Saturday’s seven-touchdown outburst that Mordecai was going to win the job. He was so confident about it that he told reporters we wasn’t worried about the competition. And, if we are being honest, seven touchdowns against ACU should come with an asterisk anyway.

Instead, the actually interesting part of the season-opener is what happened after Mordecai and the starters exited after the third quarter. Or, let’s phrase that better, what didn’t happen.

Derek Green, the senior backup, jogged into the game to spell Mordecai for the final 15 minutes. As for SMU’s highest-rated recruit since the Death Penalty, Preston Stone, he sat on the bench taking in the last gasps of a Texas summer like the rest of Ford Stadium.

“We just wanted him to have meaningful reps,” head coach Sonny Dykes said. “If he is going to play in four games [to maintain his redshirt status] we wanted them to be meaningful. Tonight, by the time we were ready to make a change at [quarterback], it wasn’t quite what we wanted it to be.”

By the time SMU was looking to put in another quarterback, the score was 49-9. It would be hard to argue that any snaps at that point would go to determining the outcome of the game. It was over before it began.

But that’s not the point. The bigger story here is that Dykes, in giving a reasoning for sitting Stone in the fourth quarter, sounded much like a traditionalist of the redshirt rules.

The NCAA stipulates that every player can maintain their year of eligibility if they play in four games or less. For a long time, coaches would try to find four of the right moments to get their true-freshman in the game. It was the balancing act of getting a player in-game experience while keeping his year of eligibility so they could be in the program for five years instead of four.

In short, it’s the long game.

But the long game isn’t often something the current landscape of college football rewards. Not with the way the transfer portal works and how finite rosters are these days.

SMU shouldn’t play the long game with Stone. And there are a number of reasons why.

First, there is the big picture. Let’s say SMU maintains his redshirt status this year, cherry picking when he goes into games and when he doesn’t.

Who is to say that Stone, a former four-star recruit, is still at SMU five years from now? The transfer portal is always wide open for a player of his pedigree. Mordecai has three years left of eligibility, so who knows what happens with that.

Nobody is saying Stone has intentions to leave school, but it’s not uncommon these days to leave years of eligibility on the table. Shane Buechele, for instance, left SMU with one year of eligibility left.

Then there is the second prong to this logic. Let’s say Stone does stay all five years.

What does the roster look like at that point? It is really impossible to say. By then conference realignment will taken its toll. Dykes, who has gotten job offers at the end of each of the last two seasons, may be at a different school. The transfer portal, which has built SMU into a contender now, could just as easily break SMU down by then.

None of this is to say Stone playing the fourth quarter against ACU will make or break his development. It’s just to say that SMU shouldn’t be so worried about burning his eligibility this year.

If there is any moment in time when the coaching staff thinks Stone should go into a game because it will help him in the long run, he should go in regardless if it his fourth game or eight game. If he burns the redshirt, fine. If he ends up keeping it, that’s OK too.

The goal should be getting Stone ready to play as fast as possible, because who knows if Stone will be at SMU five years from now or how fruitful those snaps will be by then.

“I’m as high on Preston as I have ever been,” Dykes said after giving his reasons for not playing him.

Well, if that is the case, roll him out there now. The future, in college football, comes quicker than you think. And all indications say that Stone is that future for SMU.