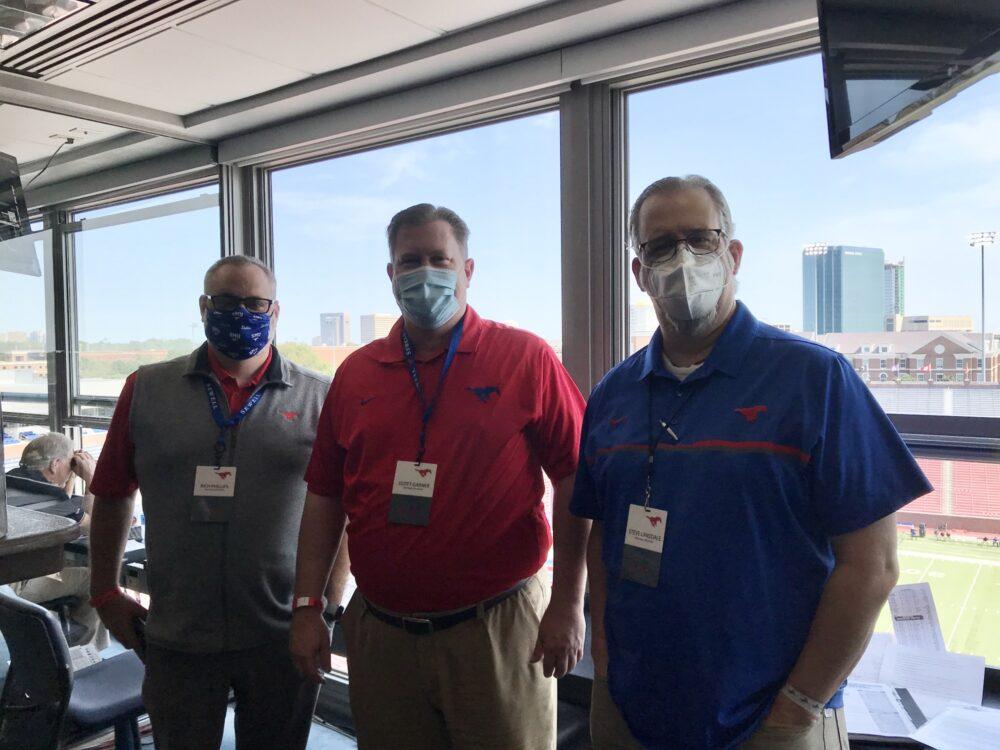 UNIVERSITY PARK, Texas — It is three hours before kickoff, high above an empty Gerald J. Ford Stadium, and the centerpiece of the home radio booth is a 32-ounce bottle of hand sanitizer.

The tube of last-ditch coronavirus protection rests on a table that doubles as the partition of this approximately 10-foot booth. To the left sits a makeshift video setup for the pregame show, a program normally broadcast from the team’s indoor practice facility about a 10-minute walk down the street. Two cameras, spotlights and individually marked headsets for the voices of SMU football are compacted into a five-foot radius.

To the right of the hand sanitizer, a traditional table overlooking the field is set for a 2:30 p.m. kickoff and SMU’s second home game of the season. That part, at least for now, looks normal.

“People always say this is a small booth. I don’t get it, it is not a small booth,” Rich Phillips, SMU’s play-by-play announcer of 20 years, says back.

It is clearly a conversation the two have had spanning back years, but now there is no debate this unique setup is cramped. It is one made necessary by the coronavirus and emblematic of the challenges faced for calling a game amid these novel circumstances.

This booth, and the three masked men inside, also now serves as one of the only vessels for the more than 75% of fans not allowed into the stadium to connect with the play on the field.

“I think (our job) is more important than ever because people can’t go to the games,” Lansdale said. “We have to describe to people what is happening assuming nobody can see if for themselves.”

But for the trio of Phillips, Lansdale and color commentator Scott Garner, actually telling the story of the game is riddled with obstacles.

One of the largest parts of the job is accenting the play on the field with stories and backgrounds of each player. For radio especially, this can make a broadcast pop.

Typically, Phillips and Lansdale will be on the field three hours before every game talking to coaches to pull one or two tidbits to use on-air. Throughout the week, it is not uncommon for Garner to be at practice to watch a player’s tendencies to break down a play on Saturday. Phillips usually travels on the team charter plane for road games, where he says the relationships with players are really cultivated.

For this season, though, all of that has been cut out. Phillips conducts interviews with Sonny Dykes and a player on Thursday over Zoom. The Monday night radio show, another place where Phillips and Garner would traditionally be able to get face-to-face contact, now is set up where the host is live in a restaurant while the team is on a projector screen.

Travel, too, is all done separately. All three drove different cars to SMU’s home opener at Texas State. When they have to fly, as they will this week to Tulane, they will go commercially on different days to make sure if one of them gets sick they are not all together.

“I feel like we are covering the team from afar,” Philips said. “I can’t meet anybody. We got a new offensive coordinator this year and I met him on Zoom. It is fine and I understand why they are doing it, but it is different.”

So a lot of it, now, is about compensating. It means different things for every job. More often, though, it means talking around the parts of the broadcast that are more bare than usual.

This is also true for the technical side of how the operation works.

The broadcast group floated and troubleshooted just about every scenario to determine how to cover games while keeping the entire crew safe. Up until just weeks before the season, the radio team was thinking about calling games remotely.

In an era where many announcers are calling games from untraditional setups in the NBA, NHL and MLB, the blueprint was there. When going down to a college level, though, it was not as feasible. The professional leagues have a world feed, and sometimes multiple camera angles, to see the game. None of that was guaranteed to be made available for SMU. It would have made Garner’s job as the color analyst all but impossible to call game solely on a world feed, so they decided against it.

“I am watching the line, the secondary and the safety’s adjustments for example,” Garner said. “The safety is in the third level of the defense and that is generally not in the picture on television.”

In-person broadcasting is not without its learning curve either. It is the little things the radio booth points to.

For example, on a typical broadcast Phillips and Garner will get the majority of the airtime. From the sideline, Lansdale follows the line of scrimmage and is in their ear shouting out who made the block or tackle. The idea is for Phillips to incorporate it into the address as if he saw it himself.

For some road games, though, where it is not possible for Lansdale to walk up and down the sideline without coming within six feet from players, he will have to stay in the end zone. Those little details will be gone.

“What comes to mind is Tulsa, where I have to walk through the bench to get from one side of the field to the other. Rich is very good at saying what he sees accurately and sort of talking around the parts he didn’t see,” Lansdale said. “It might be a little difficult, though, especially in stadiums with bad lighting at night.”

There are also the more obvious moments where things have changed to the listener. Phillips likes to let big moments breathe to let fans hear the crowd noise. With a depleted crowd now, he has to talk through those plays. When SMU walked off Memphis last week, Phillips couldn’t stop when the ball poked through the uprights to win the game .

“Usually I put up a hand as a stop sign for Scott to tell him to let the crowd in,” Phillips said. “I haven’t done that once since there hasn’t been much of a crowd. I think back to the Tulsa game when the crowd was going nuts through overtime [last year]. We don’t have quite that same feel.”

Realistically, there will never be an equilibrium in this setup. Every week is some sort of challenge.

In Week One, Phillips started his call by saying he was “coming to you live from the shower.” He meant it. Texas State had put up a shower curtain between him and Garner because the booth was too small to be six feet apart. About halfway through the game he had to ruffle it just a bit to get air.

Can you expect anything less in a year like this?

“No, it is certainly the most unique thing… so far,” Phillips said.