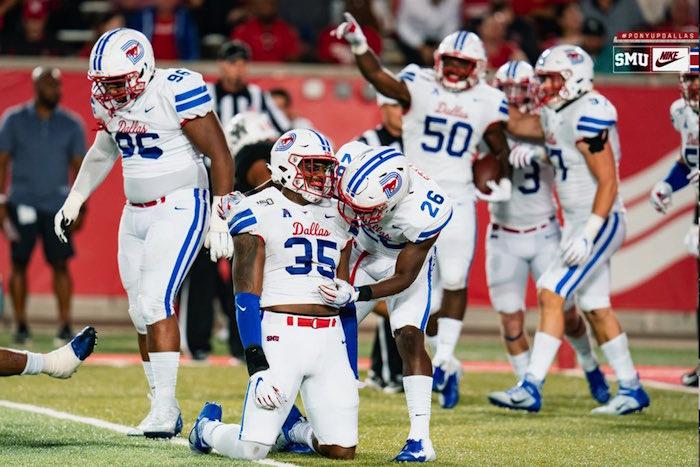 It wasn’t their best game, but SMU held on for the win against their American Athletic Conference rival, Houston, on Thursday night. Despite their struggles, the team moved to 8-0, prolonging their first undefeated start since 1982.

Coming off of a career-best game against Temple, quarterback Shane Buechele threw for just 203 yards against an injured Houston defense. Tight end Kylen Granson and wide receiver Reggie Roberson Jr. both had bad drops early in the game, stopping the offense from scoring early.

Head coach Sonny Dykes is aware of the mistakes his team made.

“It wasn’t our best performance really on either side of the ball,” Dykes said. “We made some uncharacteristic mistakes.”

Roberson, who scored three touchdowns against Temple and has been a key piece of the Mustangs offense, was carted off the field in the first quarter with an undisclosed foot injury. He didn’t return for the rest of the game, and was seen with crutches on the sidelines in the second half. Roberson wasn’t the only player who didn’t make it to the second quarter. Linebacker Delano Robinson was ejected from the game with seconds left in the first quarter for targeting.

However, several big plays kept the Mustangs alive, including a 62-yard touchdown run by Xavier Jones, who stayed upright after being tripped up behind the line of scrimmage, and a strip-sack by safety Patrick Nelson.

Xavier Jones made a move and hit the jets ⚡️ pic.twitter.com/wmAapjNW9s

Houston quarterback Clayton Tune played well, throwing for 407 yards to keep his team in the game. However, he was sacked 7 times by the Mustangs defense, which tied them with Pittsburgh for most sacks in college football so far this season.

SMU’s sideline also got bottle service against Houston, as the defense notched their 19th consecutive game with at least one turnover.

Despite the bright spots, SMU was outscored in the fourth quarter, and the game came down to the last few minutes as Houston wide receiver Marquez Stevenson cut the Mustangs’ lead to three on a 96-yard touchdown run and subsequent two point conversion.

In the end, the Mustangs defense stepped up and secured the win, sacking Tune on the last play of the game.

The undefeated Mustangs travel to Memphis next weekend, hoping to defeat another conference rival in arguably their biggest game of the season.