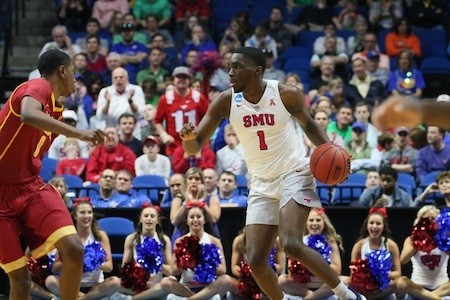 TULSA, Okla. — With 1:31 remaining and SMU trailing for the first time in the game, senior Sterling Brown found sophomore Shake Milton all alone on the perimeter.

Milton buried it, giving the Mustangs a two point lead. He jogged back down the floor steely-eyed as his hometown crowd roared behind his bench.

Moments later, Southern California’s Elijah Stewart hit his sixth three-pointer of the game, giving the lead back to the Trojans.

After a missed 1-and-1 free throw by SMU senior Ben Moore, the Mustangs fouled Chimezie Metu immediately, putting him at the line. He missed.

13 seconds to go, down one. Milton and Brown traded the ball back and forth as SMU charged for one final shot. Head coach Tim Jankovich did not call a timeout. Milton drove the lane, almost tripping and almost losing the ball. Somehow he got the shot up.

His floater banged off the iron with a thud and hit the floor. Ballgame. Hometown heartbreak.

For some Mustangs’ fans, the 66-65 loss probably seemed par for the course. Just another disappointment on a laundry list of frustrating moments that has plagued SMU since 2013.

The Mustangs have won 25 games in four straight seasons, but have made the NCAA Tournament only twice. In 2014, the selection committee snubbed them. In 2016, the NCAA banned them.

Two years ago, a controversial goaltending call on SMU in their first round matchup against UCLA wiped the Mustangs out. This season’s final game had much in common. SMU lost in the first round against an opponent from the Pac 12 Conference. The Mustangs lost by one point. SMU’s loss came down to one final moment.

This loss was equally as heartbreaking, but for a different reason. The numbness stemming from the Mustangs’ tournament exit in 2015 was flavored with anger. Many, including SMU fans, are still conflicted about that final call. All things considered, was it goaltending?

There was no controversial call this time – just an untimely half of 38.5 percent shooting and less than perfect defense. The Mustangs got outplayed by just that much. For once, they did not get screwed.

That’s why it hurts more, or at least differently.

This loss, this heartbreak, tastes of more sadness. Sadness caused by the fact that the winingest team in school history, a 30 win team, could not reach the Round of 32.

The saddest part about this ending? That the unlikely success story of this SMU team does not get to continue.

Here’s the crushing, and yet somehow more uplifting truth: this season should not have happened.

The Mustangs began the season with only nine scholarship players, two of whom later transferred. SMU had lost its three most productive scorers from the season before in Nic Moore, Markus Kennedy and Jordan Tolbert. Former head coach Larry Brown’s surprising July departure made things worse.

Jankovich, the coach-in-waiting who took over when play began in November, inherited a mess – a highly talented mess with a great homecourt, but a mess nonetheless.

Fast forward four months: the Mustangs finished the regular season ranked 11th in the nation after going undefeated at home. Even more amazingly, SMU, who was supposed to have a down year, stunned Cincinnati to win its second American Athletic Conference championship in three seasons.

The Mustangs finished the year ranked 12th overall in the KenPom ratings, running the nation’s 11th most efficient offense with only seven scholarship players. Against the average Division-I team, SMU would be expected to win by an average margin of more than 25 points.

These numbers, the conference championship and the high rankings may not do much to make SMU fans feel better, but the fact remains:

It did not happen by accident – it was a miracle by design. Many thought an unconventional and undersized team like the Mustangs could not win. Jankovich was given seven guards, and he played them like a piano.

“How many teams ever win 30 games?” Jankovich reflected postgame. “How many teams win their conference and their [conference] tournament? We’re a bucket away from extending this story. I don’t want one game to take away from what I thought was one of the most incredible teams that I’ve been around.”

Jankovich orchestrated a highly effective five-wing rotation, never trying to make SMU something it was not. The Mustangs’ efficiency along with their defensive tenacity gave opponents fits. He might never get the credit he deserves, but Jankovich would rather his players have it anyway.

“Just how we stuck together throughout the year, we weren’t playing with many scholarship players – the tenacity and passion we played with is something to be commended,” senior Ben Moore said.

The patience of the junior Duke transfer who spent two years waiting to play in Moody Coliseum payed off. With the grace of a saint and power of a freight train, Ojeleye led the Mustangs with 18.9 points per game and 6.8 rebounds per game.

The maturation of Ben Moore and Sterling Brown – two players who Larry Brown recruited for the few things they could do well – cannot be understated. Both have blossomed into well-rounded players and will graduate among the top glue-guys in college basketball.

Shake Milton and Jarrey Foster also matured, forced into a greater role than the average sophomore would have been prepared for. Both of them, along with Ojeleye and junior Ben Emelogu can anchor the program moving forward.

A disappointing end to "THE" most miraculous season in the history of @SMUBasketball. If you were a part of this, be proud. #MoodyMagic #SMU

The frustration, sadness and heartbreak experienced at the end of SMU’s only March contest should not overshadow how much the Mustangs overachieved.

This was the greatest team in SMU history. You read that right.

After winning a championship against such overwhelming odds, after playing at an elite level despite the unfortunate circumstances brought against them, it might be hard to dispute. At least until a future Mustangs squad makes a deep postseason run.

Milton’s missed floater did not make the season a waste, but rather concluded an experiment that went way better than anyone expected.

SMU might have to endure a quiet bus ride back to Dallas, but the season is not lost on the players, all of whom kept finding ways to surprise themselves. It should not be lost on us.