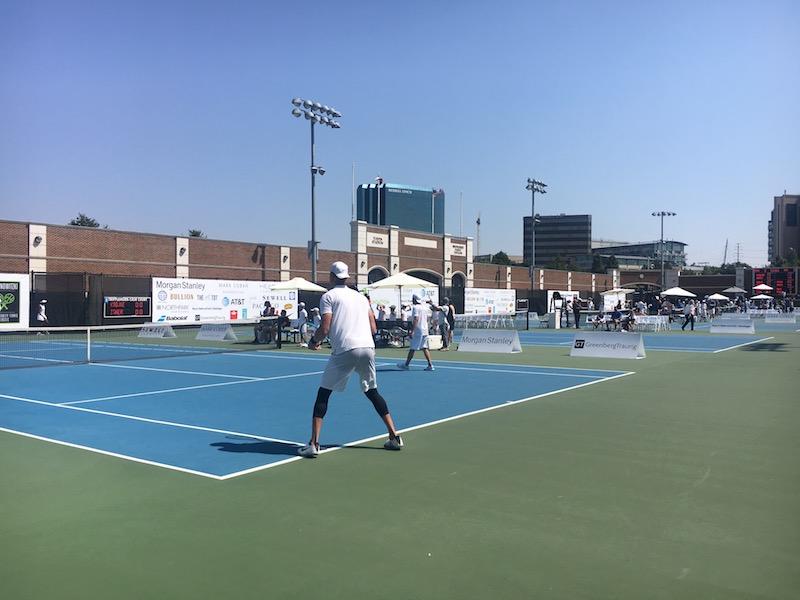 Despite the nearly 100 degree heat, the doubles round-robin style tournament took place as planned at the SMU Tennis Complex on Sept. 15.

Nowitzki once again teamed up with NBA stars, tennis pros, and local Dallas business owners to fundraise for the Dirk Nowitzki Foundation, which aims to assist underprivileged children in North Texas.

A last-minute addition to the lineup was the 2018-19 NBA Rookie of the Year Luka Doncic.

“I put a comment on Dirk’s Instagram page on why wasn’t I invited, so that’s why I got invited,” Doncic said.

Nowitzki was happy to have his former teammate join the competition, as was the sold out crowd, who broke out into chants for him several times over the course of the day. The tournament itself was light-hearted with the participants joking with one another throughout their matches.

When asked who the worst tennis player was, Nowitzki quickly pointed to Mavericks player Dwight Powell and NBA free agent Devin Harris. NBA Hall-of-Famer Steve Nash also joined in on the jokes after losing to Nowitzki.

“I tried to keep it close, then let him win at the end,” Nash said. “He talks a big game.”

In addition to NBA stars, the Association of Tennis Professionals tour’s John Isner was also able to join the fun.

“It means the world to me, to us, and to the tournament that we have a player of his stature here,” Nowitzki said.

Isner, who is 6 feet 10 inches tall, fit in nicely with the NBA stars and revealed that he used to play basketball as a child in North Carolina.

“I didn’t know I was going to be this tall,” said Isner. “Had I known that, I probably would have stuck with basketball.”

Other sports legends participated as well, including former World No. 2 Tommy Haas and five-time Olympian Mark Knowles. The pairings of professional athletes gave the basketball stars a unique experience to get a glimpse into the on-court action of the elite tennis players.

“To see the pros out here, my head is spinning just trying to hold my own,” Nash said. “I saw them warming up on the practice courts and it’s an incredible thing to watch pros hit a tennis ball.”

The day ended with a victory for Haas over Nash in the final, as well as money going towards a great cause.