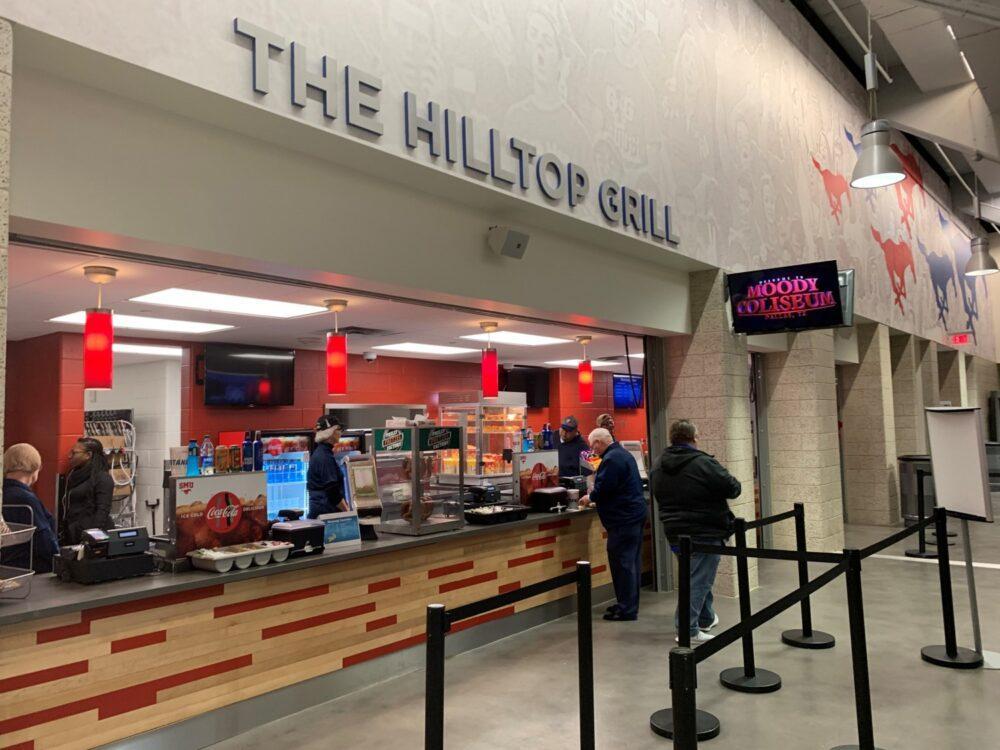 UNIVERSITY PARK, Texas — Deep inside the annals of Moody Coliseum, in a seldom visited hallway lined with molded pipes and adorned with a flickering exit sign, four concession stand workers sit in a makeshift circle.

Each of them faces one another under the hazy fluorescent light – some pressed against a wall of empty refrigerators and others flung out uncomfortably on a myriad of week-old fruit boxes and unused generators.

The dim hallway takes on the aspect of a campfire as each worker begins sharing why they are about to serve 1,500 people at an SMU basketball game in the middle of a pandemic, which has only tightened its grip on Dallas in recent weeks.

One woman, whose care-worn face belies her 29 years, cites her children. Another man, a 24-year-old student fresh out of college but with no job due to COVID-19, cites the rent.

“I need the shifts,” Augustine Gonzalez finishes matter of factly before a manager breaks up the gathering.

Gonzalez is summoned to pick up food from the loading dock, a signal for the rest of the group to disperse and begin preparations for SMU’s second home game in four days.

It is also a signal that the game – and its crowd of spectators – is about 90 minutes away from coming face to face with this cohort.

“The main thing to describe it is worry,” Gerarao Martinez says as he boxes away salsa. Martinez is the last of this four-person crew who was cut off before he could share his own reasons for working athletic games. “Worry that we will bring it home to our families…”

Martinez stops before he can say too much, his breath catching as he thinks of his two daughters back home. He also thinks of his wife, who just last year questioned why he even tacked on nights at SMU basketball games to help out his friend. Now, after losing his main job this summer, he is thankful he did.

Martinez never finishes the sentence. His colleagues step in, nodding and audibly signifying their agreement. All can relate to Martinez’s quandary between safety and money.

For every concession stand worker across college athletics, each game brings about this dilemma. Workers are grateful for the much-needed cash — 520,000 service jobs have been cut across the country since March according to Pew Research — yet keenly aware of the risks to themselves and their families.

“We are all worried…” Martinez says when he catches his breath. “Every night is a worry.”

‘Between a Rock and a Hard Place’

Each worker inside SMU’s concession stands has a unique understanding of the struggle between money and safety, but few embody the dilemma like Jose Zelino, according to his colleagues.

Zelino is a middle-aged man, with more gray hair than he would care to admit and a mustache that sits atop a mouth that rarely smiles. When he does smile, it is usually a deprecating joke about his sunken cheeks.

“Proof of the stress of COVID,” he said.

As companies made COVID-related cutbacks last March, Zelino’s 25-year career at a local Dallas hotel came to an abrupt halt. Zelino’s only remaining income came from working the concession stands at SMU football and basketball games.

There, for the last three years, Zelino has served the full menu of Mi Cocina assortments to eager patrons. It was supposed to be his side job, something to put extra money in his pockets in the event of a catastrophe.

In the summer months, when college sports were uncertain to return, he remembers praying for them to play. It was going to be the trickle of income he needed while he tried to look for something more permanent.

Like many of his colleagues, he was grateful for the income when SMU did come back to play. During football season, he had at least one day of reliable work each week.

But other questions of safety began to arise as the season wore on, and he became less certain about whether his prayers were truly being answered.

“College kids and responsibility… don’t exactly go hand-in-hand,” Daniel DiMarco, a worker at the neighboring Rudy’s BBQ joint, said in reference to the game when the student section was kicked out of the stadium for not wearing masks.

That scene underscored football’s uneasy season wherein the number of people and some of the fans’ conduct put the workers at risk.

And then there is the reality that 25% capacity stadiums limit the volume of customers and money that many concession stand workers are accustomed to receiving. The evidence is all around them in this concession stand: The hot dog racks are only half filled. The beer has one stand instead of two.

So the questions for these workers become more complex. They need the money, but also want to ward off the virus. Interacting with fans in-person, who have a spotty record of mask adherence, is not the best way to do so. And, if the calculation for many is simply they need the money, is the revenue at half-capacity stadiums enough to put up with the safety risk?

“We are stuck between a rock and a hard place,” DiMarco said. “I have a dad with a heart condition at home. I just got out of quarantine myself. I think about it a lot of whether I should be here.”

Preparing for the Worst

Each concession stand in Moody Coliseum has a different protocol for COVID-19 testing and ensuring employee’s safety.

Most stands do not require tests, Martinez says. The only time a test would be required is if an employee had known, direct contact with a positive case. Otherwise, employees have their temperatures taken as they walk through the Moody Coliseum doors. They wear masks and gloves.

Aramark employees, who make up about half of all concession stand workers, will eventually receive the vaccine through SMU. The other half who are not Aramark employees may not.

For Martinez and his band of colleagues, that is not enough.

“What if we get it during the game from a fan,” he said. “That, when you think about it, is the most likely scenario. And we bring it home to our families that night before any of us could show a symptom.”

So, these workers prepare for that worst-case scenario, and treat their homes as if they were doctors at a COVID-19 ward.

“I get out of my car, take off all my clothes and throw them in the wash separate from all the other clothes, and go right to the shower,” Martinez said. “I scrub everything off before seeing my family.”

Most workers, even if they are not required to, also try to get a test at a free Dallas testing site at least every two weeks. Most also know that despite all their precautions, it may not be enough. But after much thought, many have determined it is a risk they cannot afford not to take.

“It is not much of a choice,” Zelino said. His following trail of silence says it all.

Just as Zelino sinks into thought, the first customer arrives.

“What have we got here?” a question from an SMU fan at the counter pierces through the thin wall separating the concourse from the back room where Zelino is situated.

Zelino looks up at the clock, 30 minutes until tip. Fans have begun to trickle in, his first customers among them. He gets up, strapping his mask on a little tighter. The time for pensive thought is over.

“Those are our toppings for chips and salsa,” Zelino says before even turning the corner, answering his customer’s question almost reflexively.

And, just like that, he is in selling mode, wading into another night of risk. A night that may or may not bring home the virus that has claimed the lives of 2,637 people in Dallas alone. A night that will surely leave him sleepless for several days, wondering if he has given it to his wife and kids.