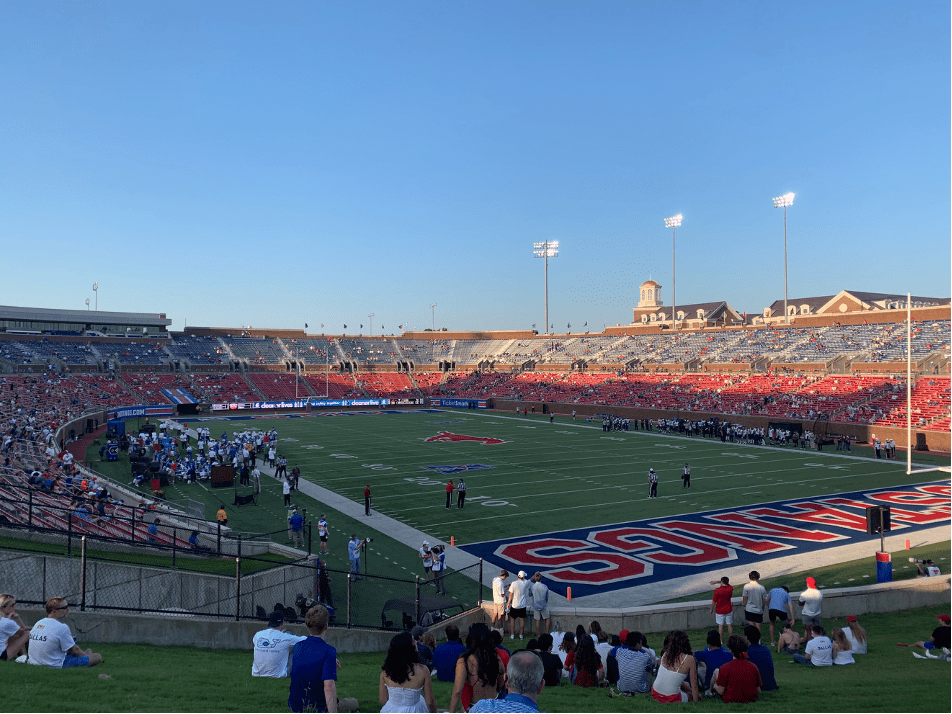 Football returned to the Hilltop on Saturday night as SMU kicked off its home opener against Stephen F. Austin. Although SMU’s play on the field was nothing out of the ordinary, as they dominated the Lumberjacks, gameday looked different this week compared to years past.

Boulevard tents were not set up, cheerleaders danced from the stands, and the Mustangs did not proceed down the boulevard before the game. Due to COVID-19, various precautions were taken in order to keep fans and players safe.

“This year’s game day felt very different obviously without the boulevard and without large gatherings before the game,” said Van Pittman, a senior at SMU.

SMU announced that there would be no boulevard — a beloved tradition by students, alumni, and the community — for the first home game. Additionally, the SMU Athletics ticket office sold 25% of the stadium’s seats and made only 1,000 tickets available to SMU students.

Despite less tickets, many students did attend the game, especially seniors as it’s their last football season.

“I try to go to every home game and this year will be no different,” Pittman said.

Pittman was eager to attend games during his final year on the Hilltop and said that the only precaution he had to take was wearing a mask.

“Being all together in an outdoor stadium feels very safe,” said Pittman. “I will absolutely go again.”

Although some students did attend the game, others were not sure how the stadium process worked and if they would be able to pick who they sat with. Weston Emery, a freshman at SMU, was excited to attend games when he came to college but decided not to go to his first game as a Mustang.

“I would attend the game if my friends and I could sit together and would definitely like to go to a game this season,” said Emery.

Like Emery, some students were unsure how social distancing would work at Gerald J. Ford Stadium. At the first game, although each student was given a ticket with an assigned seat and row, most students could be found on the lawn in the end zone watching the game with their friends.

“Although attendance was slightly muted, watching the game at the stadium was great compared to just on a TV. And, being at the actual stadium felt very similar to some of last year’s games,” Pittman remarked.

As changes and preparations have been made throughout the offseason, SMU Athletics has worked to create something that everyone can enjoy regardless of where they watch the game. The SMU Football’s Instagram and Twitter accounts post game updates throughout the game. SMU Athletics’ website also has an “SMU GameDay” webpage for fans to find all necessary links for game information. Jewel Burleson, Co-Captain of SMU Pom said that she is pleasantly surprised with the SMU Athletics’ marketing team this semester.

“[They] really ramped up promotional stuff this year and created a lot more hype for the football team especially amongst students,” said Burleson. “I’m hoping this will continue into the future.”

It won’t be long before fans can return to Ford Stadium as the Mustangs are scheduled for another home game Saturday, October 3 against Memphis.