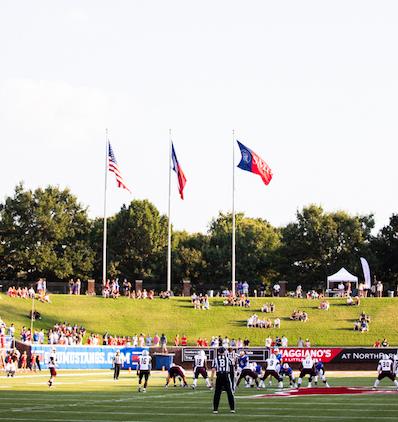 Every child dreams of what they’re going to do when they get older. For many, that dream is to play sports. As Preston Stone sat in front of the bright lights and cameras, he had his whole future sitting in front of him, surrounded by the people who were with him every step of the way. All that was left to do was put on a hat.

Growing up the youngest of three, Stone always looked up to his older brothers. Both Parker and Lindell Stone began playing football in elementary school, Preston’s first time seeing the game.

“I grew up watching them play when I was really little, and I obviously wanted to be like them,” said Stone. “My oldest brother Lindell, he played quarterback, so I guess that’s how I started to play quarterback…. I fell in love with it.”

But for Preston, not only did he follow in his brothers’ footsteps, he also played with them, despite the age gap.

“Preston with sports and school, he’s kind of always been ahead,” said Parker Stone. “In elementary school, he would be doing the advanced stuff, the extra work. And then with football, at least in youth football, he was always playing up.”

Stone might have been younger than his teammates, but he impressed his coaches with both his play on the field and his maturity off the field. Daniel Novakov, head football coach at Parish Episcopal, first met the young player when he was in elementary school and knew Stone possessed something you don’t see every day.

“You could just tell there was something special about this kid that not all the other kids had,” said Novakov. “I can remember the first time I met him being really impressed with his manners, how he was raised, how he was able to communicate with adults really easily as a fourth grader.”

Five years later, Stone would join Novakov’s team. His freshman year of high school, Stone was named the starting quarterback of Parish Episcopal’s varsity football team. Although it was his first year on the team, Stone’s position required him to lead the upperclassmen, including his older brother Parker. In that first season, he was a silent leader, leading his team through his work ethic and determination.

“I’ve never had a player as talented as Preston that works like he’s not very talented at all,” said Novakov. “I can’t remember him missing a weight workout since I’ve been here.”

“He was starting freshman year and we didn’t have a good season,” said Parker Stone. “There were a lot of hits, a lot of times where there wasn’t a lot of help for him, so he definitely changed a lot there… I think it set a bar for him to realize, ‘Oh I was at the top in middle school, but now I see where the new standard is to be great in high school.’”

And as his high school career continued, he became more comfortable in his role as a leader and found a rhythm.

“I’ve seen him become more of a vocal leader and more forceful with his leadership style,” said Novakov. “I think he’s gotten more and more comfortable every year becoming the heartbeat of the team.”

His junior season, Stone captained his team to a 12-1 record and its first TAPPS Division 1 State Title, his favorite memory from his high school career thus far.

“Winning a state championship with my brothers, that was awesome,” said Stone.

The older Stone got, the more he began to think about his future. His play on the field led to national recognition and many calls from college coaches. Playing football at the next level was something Stone had always dreamed about, and because he was a standout at such a young age, this goal seemed to be within his grasps. He received his first college offer in 8th grade, before he had even played a snap of high school football.

“That was a pretty special day for me,” said Stone. “Obviously, it’s something I never could have expected, but just being that young and being presented with an opportunity like that is really, really special.”

Stone received numerous college offers from top football programs across the country. From LSU and Alabama, to Penn State and Notre Dame, the top-ranked quarterback had his pick of schools.

And by January of his junior year, he was ready to commit. Stone’s announcement, however, was done in a way that had never been done before.

Stone and his family traveled to San Antonio for the 2020 All-American Bowl to announce his decision on national television. After the game, five hats were laid out in front of him: Penn State, LSU, Texas, USC, and SMU. It was finally time for him to decide.

“Getting to announce that on national television was pretty special,” said Stone. “It was definitely a huge blessing for me. Growing up I had seen people do the hats and stuff and to actually have my future sitting right in front of me it was pretty surreal.”

“Even though it wasn’t focused on me, I was standing next to him a little bit nervous,” said Parker Stone. “All these people watching and these cameras. But it was fun. I’m glad we got to do it as a family experience.”

And the school he selected: SMU in his hometown.

“SMU has really always been home for me,” said Stone. “It was my favorite school growing up. I guess I’ve always wanted to be a Mustang.”

In addition to SMU being close to home, it also has family ties for Stone. His father graduated from SMU and his older brother Parker currently plays wide receiver for the Mustangs. The two brothers will now be reunited on the field for the beginning of Stone’s college career.

“I can’t wait to just catch passes from him,” said Parker. “Or even just hanging out around the facilities, knowing I’ll be there to help him and guide him through the transition.”

“Parker is my best friend in the whole world,” said Stone. “So, getting to be able to do something we love and work towards a goal that we’ve always had, it’s really amazing.”

When Stone put on the SMU hat at his commitment announcement, it seemed like a perfect fit.

“I always felt like SMU would be a good fit for him,” said Novakov. “I think Preston is the type of kid that’s a program builder. When he came here, we had just moved up [divisions]… we were trying to make a name for ourselves and he’s kind of been here every step of the way, building the program into a state champion this year. I think the same thing’s possible for him at SMU and I think he sees kind of the same pathway that he saw here.”