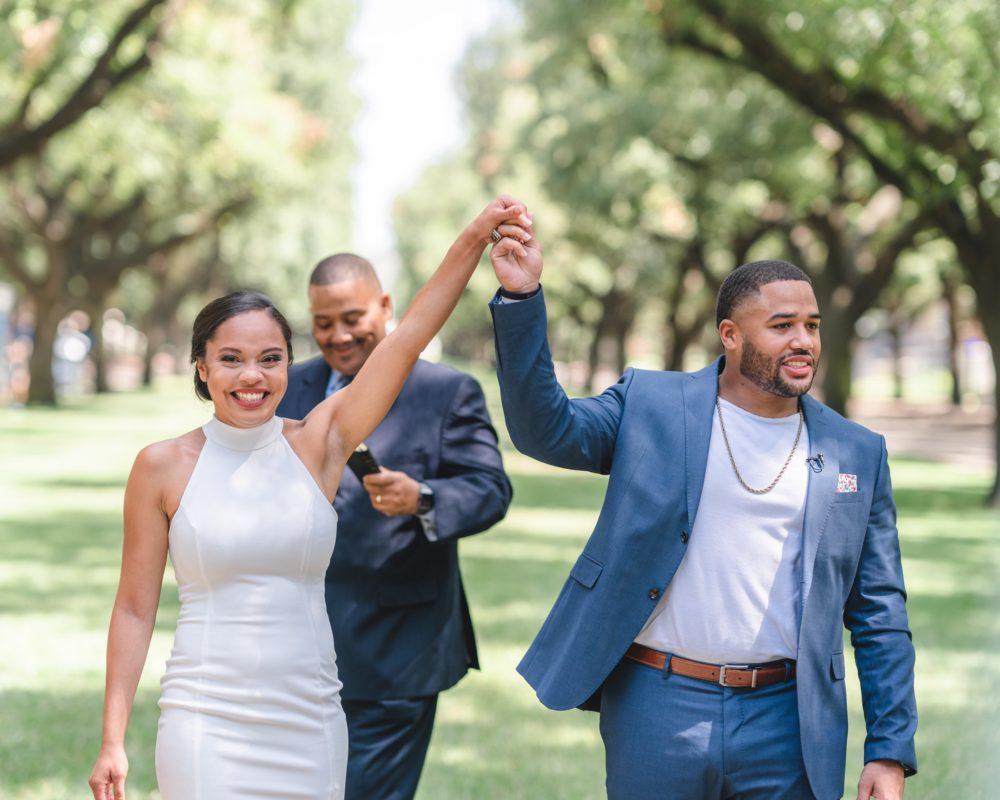 Trimiesha Young needed an evening walk. After nearly four months in quarantine, the late-night walks on The Boulevard had been born out of necessity more so than habit.

But this time, on a late June night at SMU, Young had an idea. She wanted to marry her boyfriend of 10 years, Randall Joyner, in the same place that she took her evening strolls.

“Hey, how about we [get married at SMU]?” Young posed Joyner when she arrived back home.

And just like that the marriage that had just been postponed until 2021 amid the pandemic was back on. It also was in a venue, setting and timeline that no one could have imaged just a week before.

Joyner, who played at SMU from 2010-13 and was a semi-finalist for the Campbell Trophy while an undergraduate, originally had planned for the wedding to take place at the Westin in Downtown Dallas. As a byproduct of being in the coaching industry, with stops at Hawaii and Ohio State before he landed back at his alma mater, the guest list was originally over 400 names long.

This impromptu ceremony, however, cut that list down to immediate family only. The process was so last-minute that SMU’s facilities staff did not approve the ceremony until a week and a half before the day of the wedding. As for the actual location, the spot on The Boulevard where the Joyners would take pictures, that was chosen a day before.

“We still wanted to get married [even after the coronavirus forced us to postpone],” Joyner said. “… It wasn’t like we had this draw out plan. We just knew we wanted to do it on SMU’s campus. We kind of drove around and said ‘Hey, this is a good spot.’”

Can’t believe I married the woman of my dreams! @mieshamo

Some of favorite pictures from our special day! pic.twitter.com/rh88SCYHIx

Protected in the shade — an important caveat to a July wedding in Texas — and with the backdrop lined with trees and Dallas Hall, the Joyners married on July 10.

The only carry over from the original list of invitees was Michael Green. Joyner’s uncle, who officiated the wedding, is a local pastor and had always planned on playing that role. Still, he found out a week before the event about Young’s idea.

SMU, for the Joyners, is a significant place both past and present. The coronavirus, for everything it has taken away, might have delivered a ceremony uniquely fitting in this regard.

The two met in high school and Joyner notes that Young went to every one of his college football games. Young graduated to become a kindergarten teacher in the local area. She will often have SMU football players come into her class to interact with the younger students. It is a way to motivate them, an inspiration to look toward the future.

Just recently, she tweeted pictures of SMU defensive ends Tuner Coxe, Delontae Scott and Joyner all talking with her students.

I can’t thank @Lontaetrefive, @TurnerCoxe and Coach @LetsGo_Bo5 enough for joining my class today to help. The kids loved having SMU football players at their Christmas party. Thank you for being such awesome young men! #PonyUpDallas #FirstGrade #pisdlearns #pisd #planoisd pic.twitter.com/rYVmlLv7MU

I love mixing my @SMU_Football family and students together!
Great day today loving on the kids all over DFW! #PonyUpDallas ? pic.twitter.com/obGgNUBHYo

Next year, both Joyners intend to have a larger ceremony if the coronavirus permits. The 400 people that were scheduled to celebrate in 2020 will be invited back. SMU’s entire coaching staff will be a part of the ceremony. 20 former teammates of Joyner will also be there.

For now, though, it is already back to work for the Joyners. They spent last Tuesday voting, something both feel passionate about. Trimiesha tweeted out right after, “Go get your vote on. Walk it like you talk it.”

“It is our responsibility to equip and inspire our players… it’s eye opening that only 10% of eligible people go and vote (in local elections). Well, the local level is where you can make the most change,” Joyner said. “I think it is very important.”

As a teacher and a coach, both see their jobs as an extension of themselves. They were out protesting in the aftermath of George Floyd. Maybe next year after the celebration they will take time off. For now, though, work is not really work for two people that have made a life in pursuit of serving others.