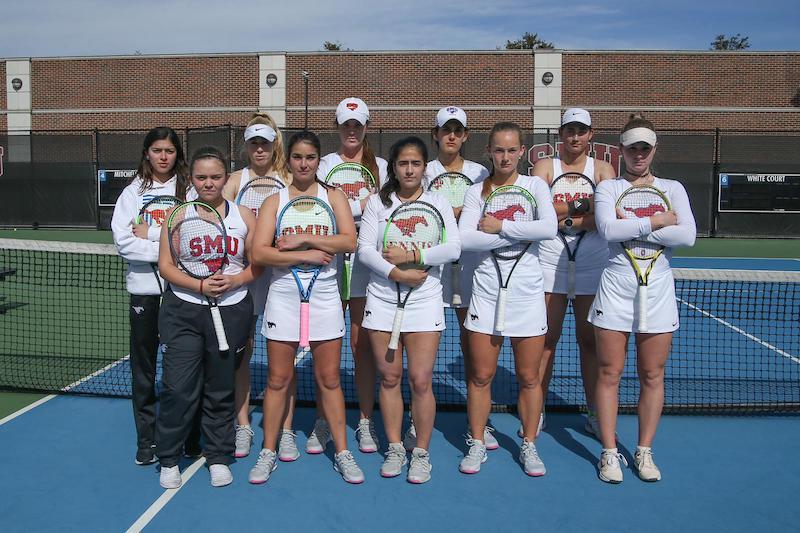 By mid-afternoon on a typical day in Alabama, Claudia Bartolome has just finished her array of online classes and is wrapping up a near-daily run. These days, she is not only trying to keep pace athletically, but also with the nearly endless barrage of text messages and calls from her teammates, family and coaches.

If she does dare to glance at her phone at the end of a workout, another wave of check-in messages surely awaits her, coming from all parts of the globe. Sitting down in the Alabama sun, nobody would blame Bartolome for escaping the virtual conversations for just a second and letting her mind wander off to how she got there, and how the last three weeks have unfolded.

If she were to let her thoughts veer, however, they wouldn’t gravitate toward Turpin Stadium, SMU’s state-of-the-art facility, and the tennis matches that have gone unplayed. Instead, she would think about her family in Torredembarra, Spain, where her parents have been quarantined for weeks. Her life, along with the handful of international players also on SMU women’s tennis team, looks much different now than it did in February.

Three weeks ago, Bartolome was in the throngs of a “culture-building” season under a first-year head coach. But as the calendar flips to April, she and her three other international teammates are away from their home countries, trying to find an equilibrium in a world shuttered amid the Coronavirus.

On paper, the cancelation of the women’s tennis season, along with the rest of NCAA sports, was abrupt. At 3 p.m. on March 12, head coach Jeff Nevolo had just released the team from a meeting. There, for the first time, they learned the season would be suspended. By 5 p.m. that same day, Nevolo summoned everyone back to the locker room to inform the group the remainder of the year was off the table.

Effective immediately, all spring sports competition will be suspended until further notice. pic.twitter.com/ubBusaBBSc

“Our coaching staff was in the office, [both the] men’s program and women’s program. We were watching all these tournaments get canceled and it just became clear we were going down a path,” Nevolo said remembering the day.

It “evolved quickly,” to borrow Nevolo’s words, but if there was any team that could have been prepared for the news, it was this one. With a roster that features international players from Spain, Italy and Mexico, in addition to the American players on the roster, there was an understanding long before the United States wrapped its arms around the Coronavirus that something much bigger than sports was brewing under the calm façade of American media coverage.

Bartolome herself said she was monitoring the situation in its early stages from an ocean away. As the virus spiked in China and across Europe, her family in Spain was at the forefront of the fight. Isabella Tcherkes Zade, a freshman from Parma, Italy, had a similar situation, unable to get to her home country as Italy’s death toll seemed to be stuck in the groove of an exponential curve.

“First it was in China and then it got to Europe and it was really bad. My family was living in it,” Bartolome said. “They were asking me all the time ‘what are you doing,’ because it was bad in Spain. The people (in the US) were not aware, but we were because of my family. They were worried.”

Nevolo added, “It was becoming a very big topic of conversation among our players.”

So as Nevolo sent out the call for a second team meeting on the team’s “Whatsapp” group message, the canceled season did not come as a surprise to the team. There was no anger in the room — although Bartolome would admit to some tears — just a measured response and an understanding that the world demanded something bigger than sports.

“I think it was a call to action. When you think about it, I don’t think anybody on our team was alive – maybe some of them were babies – when 9/11 happened. To compare is risky, but when they are canceling sports, something serious is going on,” Nevolo said. “What I remember most from that meeting is the sense that there was something more important than sports in that moment.”

In Nevolo’s mind, and most of the team, the immediate thoughts were about family and the world rather than the upcoming match at UTSA, then relegated to just the first of many empty days on the calendars. For Nevolo specifically, he addressed and thanked the seniors, whose career is in limbo, but his mind raced off to travel plans for his players and, closer to home, the well-being of his two children.

Bartolome’s own travel experience was indicative of a roster stacked up with international talent. She fell back on her American ties. Bartolome could have relied on her roots in Pittsburgh, her coach said. She still holds close relationships there after she transferred to SMU from Pitt her sophomore year. In the end, she traveled with teammates to stay with her close friends in the south.

“I didn’t want to go home because of the situation in Spain. I think it was risky to go back and take a plane, so I decided to stay,” Bartolome said, who hopes to return to Spain in May.

The rest of the team followed suit in relying on their American connections. Tcherkes Zade is currently living with her sister in Florida. Jackie Nylander, a freshman from Sweden, followed her teammate to the Sunshine State and is living with a close family friend. For her part, she is the sister of two National Hockey League players (brothers William and Alex play for the Toronto Maple Leafs and Chicago Blackhawks, respectively) and owns an American passport. Sarai Monarrez Yesaki is the lone international to make it home, to Monterrey, Mexico, but spent a handful of weeks in Dallas in the immediate aftermath.

“We have a unique situation where our internationals have some pretty solid American roots,” Nevolo said.

With everyone situated, for the time being at least, the landscape of movement now shifts to a more abstract sense. With the NCAA granting an extra year of eligibility to spring student-athletes, the roster is in flux. The two seniors on this team, Monarrez Yesaki and Tiffany Hollebeck, have to make a decision to come back and play or graduate and move on. For as ahead of the curve as SMU was for the cancelation of the season, in this regard it is as uncertain as the rest of the country.

To make matters even more complicated, the financial aid for scholarships has not been determined. If the seniors do stay behind and play, as the next group of underclassmen come in, there is no guarantee that their scholarships will return with them.

NCAA women’s tennis programs get eight full scholarships to spread around an entire roster. SMU has 10 players on the team with more coming in next year, and there is still no word on whether the conference, school or governing body will extend the number of full-ride scholarships available to compensate. Nevolo indicated that handling the underclassmen in his case is “more cut and dry,” but the seniors continue to wade into uncharted waters.

“With the seniors, we are still waiting on word from the administration as to what is going to go on. Whatever happens, we will make the best of it. I do think we have a great core group of players,” Nevolo said. “If our seniors can come back that’s wonderful and if they can’t it probably has a reason that has a bigger effect on the department as a whole… we have thought about it, but we don’t have a lot of firm answers just yet.”

Despite the unknowns, the conversations are taking place between the senior class and Nevolo. Both seniors have expressed their desire to come back if allowed.

“We had such great team chemistry and good leadership. Two of our leaders… we had a lot but our two senior leaders, would love to come back and be a part of it again. That is what they have told me,” Nevolo said. “It is going to be interesting. We understand that there are bigger decisions made at the top.”

As the thoughts will inevitably go in circles for the coaches and the players off the next two weeks, the new normal of everyday life is working to push those thoughts away, even if it just for a second. Nevolo is working to conduct end-of-season meetings via Zoom and players are attending their virtual classes while would-be milestones in the season pass — most notably Senior Day that would have taken place on April 11.

At least in the Nevolo household, where his wife Dianna is busy with her job in the medical field, reruns of Frozen and Mulan can momentarily make it all go away. The first-year head coach jokes he has seen those two films around 55 and 65 times respectively each since quarantine hit Dallas. Another hit activity is walking.

“We have gone for numerous walks. I don’t think I have ever walked this much in my life,” Nevolo said. “We are starting our family norms and routines but we will get there.”

Nobody truly knows when the quarantine will subside or the answers will come, but one this is sure: the perspective of the team and the vision of its leader, will take everything in stride.