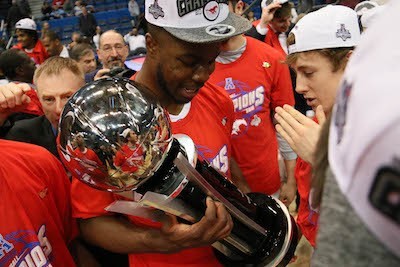 HARTFORD, Conn. – They waited all of five minutes.

Calm and confident, SMU players and coaches sat in bright orange lounge chairs in a room tucked deep in the tunnels of the XL Center, watching the NCAA Tournament selection show. They knew they would be chosen. They had just won the American Athletic Conference tournament not half an hour earlier.

As quickly as the Mustangs asserted themselves in Sunday’s AAC title game win vs. Cincinnati, they learned their NCAA Tournament fate. The Mustangs were selected as the No. 6 seed in the East Region. Friday in Tulsa, Okla., they will play the winner of Wednesday’s Providence/Southern California 11-seed play-in game.

A 30-4 team that has lost a single game since Nov. 30 was seeded sixth in its region. SMU has also won 16 straight games and is 13th in the RPI rankings. The seed assigned to SMU was a source of skepticism for some, including SMU’s most recent victim’s head coach.

“We won 29 games. SMU won 30 games,” said Cincinnati head coach Mick Cronin, whose team also was tabbed a No. 6 seed. “I think it’s pretty obvious that nobody was really impressed with that.”

Even SMU head coach Tim Jankovich understood the criticism and the right to complain, though he didn’t do so himself.

“I don’t blame coaches for doing it at all” he said. “I don’t blame them because you always feel like your guys deserve better. I certainly think they deserve a great number.”

Then again, there is the argument against seeding SMU any higher. The Mustangs have just two RPI top-50 wins, both against the same team, against three such losses. All but three of teams seeded in front of them at least six such wins. The most important data point for the committee, after all, is quality wins. SMU, because of its 4-3 start to the season, missed its chance for two more of those.

But compared to its past trials, that seeding is trivial. SMU was banned from even playing in the tournament a year ago. In 2014, it gathered the team and fans for a watch party at Moody Coliseum, only to not be selected at all.

“I’m back in the tournament,” SMU guard Sterling Brown said. “That’s all I want – I just want a chance to win the national championship.”

“Once you tip off, all that doesn’t matter. It’s game time.”

Added AAC Tournament most outstanding Player Semi Ojeleye: “At this point, I’m on top of the world. Nothing can bring me down, to be honest.”

Their coach concurred. His biggest concern regarding SMU’s draw in the NCAA Tournament had been eased.

“I could care less what the number is. They’re just numbers,” Jankovich said. “I’m just thrilled we’re playing on Friday. I thought that was going to be really, really important. We’re in the last game in the country today.”

That’s SMU now, and for much of the season: Locked in on the court and locked in on making a tournament run. That 4-3 start may as well not have happened. Brown, for one, couldn’t even remember the record.

One of those three early losses came at USC, when SMU was content to let the Trojans get whatever shot they wanted in their 50-point second half. If USC beats Providence, they would meet again.

“That would be great. That’d be an ideal matchup,” Brown said. “They got us at their house. We were a young team then. We’re more mature now. We’re ready for them.”

SMU just might be under-seeded – not because its record or resume deserved better – but because of its supreme confidence and wealth of past trials it wants to avenge. The 2014 watch-party-turned-disappointment, the 2015 goaltending call vs. UCLA and the 2016 postseason ban are just the start. Its seniors, Brown and Moore, and the rest of the team have withstood any and all setbacks without complaint or deterrence. Therein lies the team’s uniqueness.

“This is not normal,” Jankovich said. “This is not a bunch of guys that had a good year and they’re going to the NCAA Tournament. It runs deeper than that.”